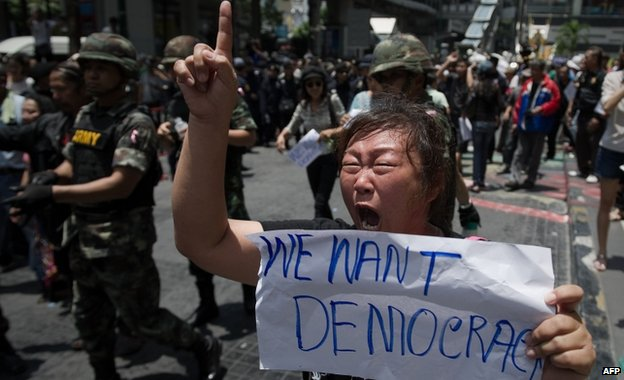 On the afternoon of 22 May 2014 Thailand’s military launched a coup in response to which even the most casual observers of Thai politics and history would have sighed an exasperated ‘not again!’. Indeed, this is the Kingdom’s 12th military takeover of power since becoming a constitutional monarchy in 1932.

The most recent coup was the climax, toppling the besieged government of Prime Minister Yingluck Shinawatra - or rather what was left of it following her ousting from power after the Constitutional Court found her guilty of an illegal personnel transfer.

The coup came after nearly half a year of political gridlock due to sustained street protests in the capital Bangkok, where opposition politicians instigated chaotic actions that at times have turned violent. Such gridlock is just the latest episode of a much longer crisis that has rocked the Thai political landscape. Since 2006, the clash of multiple issues and stakeholders often beyond the realm of stable democratic politics had led to colour-coded street protests and military coups. And yet again we have a military junta that has complete control over the political discourse. The National Council for Peace and Order (NCPO), as the junta officially calls itself, has outlawed public gatherings, detained dissenting opponents and enforced a high degree of media censorship.

In Thailand, military coups d’etats seem to follow a distinct pattern: after seizing power and declaring martial law, the first few orders dissolve parliament. Shortly after that, comes an order declaring that the current constitution has been suspended. The duration of this legal void until a new constitution is promulgated, differs from coup to coup. This time, it lasted about two months as the junta adopted a new interim constitution that whitewashes its own actions, declaring all its past and future acts legal and constitutional. Such convenient clauses are also included in the interim constitution of 2014, while the touted emphasis is on ‘reforming’ Thailand’s political system to end the country’s long-running divisions. In other words, the military junta’s (official) plan is to ‘bring back reconciliation’ to Thai society and to rid politics of corruption - a catch-all justification to demonize elected politicians.

With new democratic elections recently pushed to ‘sometime in early 2016’, post-coup government bodies continue to release reform recommendations about nearly everything.  Leading the way, the National Legislative Assembly (NLA) acts as an ersatz-parliament, while the National Reform Council (NRC) is tasked to hand out political and legislative recommendations and to suggest constitutional changes. As is the case with nearly all other bodies, the NLA members have been appointed by the military junta, and have in turn confirmed junta leader General Prayuth Chan-Ocha, who was army chief at the time of the coup, as prime minister. A third major body created after the coup is the Constitutional Drafting Committee (CDC). Its 36 members are specifically tasked by the interim constitution (Section 35) to write a new charter that would build ”efficient mechanisms” to combat corruption but would also ”enhance good morals [and] ethics” as well as measures to prevent populist policies - without ”manipulations and mastermind of any person or group” [sic].

These words alone reveal the true motivations behind the junta’s ‘reform’ plans: to undo and virtually block the political forces of Thaksin Shinawatra, who became prime minister in 2000. While his illiberal tendencies did not make him the greatest champion of democracy, he is so far the only prime minister to be re-elected - mostly thanks to his popularity among the rural population that profited from his government’s tailored populist policies. His solid constituency in the North and North-East has, perhaps unwittingly, triggered the awakening of a politically long-neglected region that now calls for greater political participation.

Back in Bangkok, the political establishment of bureaucrats, the military, and those loyal to the monarchy, have perceived such decentralization of Thai politics as a threat to their monopoly of power. Yet, even the 2006 military coup that ousted Thaksin and dissolved his party could not stop the political shift and the incarnations of Thaksin’s parties won the elections in 2007 and 2011, with the latter resulting in his sister Yingluck becoming prime minister. Meanwhile, the junta’s rhetoric has aimed at undermining the legitimacy of democracy by equating it with corrupt politicians.

Distrust and authoritarian tendencies are pervasive. One example of many is the junta’s urge to micro-manage every decision, instead of relying on a civilian administration. Anxiety over the future of Thai politics is exacerbated by concerns over the royal succession, as the long reign of King Bhumibol Adulyadej is in its twilight years. In the already volatile political atmosphere, this is a highly sensitive issue. Any public discussion or criticism of the sacrosanct monarchy is deemed illegal and many have been convicted for royal defamation (lèse majesté).

Thailand’s next constitution, as part of the largest scale legislative revamp of its political and legal system in recent history, appears to be instrumental in systematically suppressing democracy. Features of the constitutional draft have raised such concerns that some claim it would be better to stay under military rule than to hold elections under the proposed constitution.

Arguably its most controversial provision would allow the Parliament to elect a prime minister with two-thirds majority, who is no longer required to be an MP (Section 172). The drafters have repeatedly insisted that this additional super-majoritarian hurdle is to be applied only to ‘diffuse a political crisis’, but, as the anti-government protests of 2013-14 have shown, these political stalemates can easily be provoked. This eerily parallels to events in 1992, when an elected parliament appointed army and junta chief General Suchinda Kraprayoon to be prime minister one year after a coup. This caused widespread protests and the subsequent deadly mass crackdown by the military went down as the ‘Black May’ in Thai history.

The new constitution is to introduce a mixed member proportional representation instead of the old first-pass-the-post system for the election of the new 470 members of the House of Representatives, the lower chamber. For the 200 members of the new Senate, the upper chamber, each of the 77 provinces elects one Senate member, who will be pre-vetted by an unspecified committee. The rest of the seats will essentially be filled with members of different occupational fields, mostly civilian bureaucrats and military officers. This new electoral system, on the surface, seems intended to prevent the ‘dictatorship’ of the parliamentary majority - a thinly-veiled reference to Thaksin and his associated administrations - and supposed to strengthen smaller parties. However, it could result in unstable multi-party coalition governments, as happened 25 times between 1979 and 2001.

Several post-junta institutions like the 120-strong National Reform Assembly or a National Moral Assembly - all fully appointed, of course (Sections 279 and 74) - will keep under check any future government that veers too far from the generals’ vision. In other words, these watchdogs will make sure that the military junta’s reforms, ideology and power-sharing structures are cemented.

Given that the NRC gave the green light to the draft constitution with only cosmetic changes, it is likely that the CDC’s - and by extension the junta’s - plans will be fully realized. Thailand’s 20th constitution will transfer powers from the hands of elected officials back to unelected ones – that is, if elections are ever actually held, as any public opposition to the constitution, or dissent against the military regime, could serve as a convenient excuse for the junta to claim that the situation is not peaceful enough to hold elections. It is doubtful whether there will be even a referendum on the constitution, which the junta apparently perceives to be an annoying obstacle. Nevertheless, there is sustained criticism of the regime and of the constitution in particular, including a rare display of oppositional consensus from across the political spectrum.

It was promised that the ‘reform’ process undertaken by Thailand’s military junta would be an inclusive one. However, through measures solely aimed at ousting political rivals and disenfranchising a sizable portion of the electorate in the process, it has turned out to be the polar opposite. The junta appears to use the drafting process to constitutionalize the suppression of democracy. That threatens the very democratic foundations of the Thai state and it is feared to bring about even greater instability.

A core problem in Thailand’s dysfunctional political system is not only the wording of the law but also its lack of implementation and enforcement. This time, however, the military government and its allies, overseeing the entire process, are unrelentingly certain that their ‘reforms’ will be the ultimate means to end the crisis, even at the cost of democracy itself. If that also fails, the option to launch yet another coup can never be ruled out.

Anonymous 1 May 2015
An excellent outline of what's going on. Regarding installation of a non-MP as Prime Minister, the point's well made that the necessary "political stalemates can easily be provoked". However, that apparent safeguard of a two-thirds "super majority" being required also evaporates all too easily; if, after 30 days no PM emerges through election by a majority, Section 173 allows appointment of "the person who receives the highest votes as the Prime Minister" i.e. not requiring even a simple (50% + 1) majority - never mind a super majority.