Thailand’s next post-coup constitution: The dictatorship of the ‘good people’? 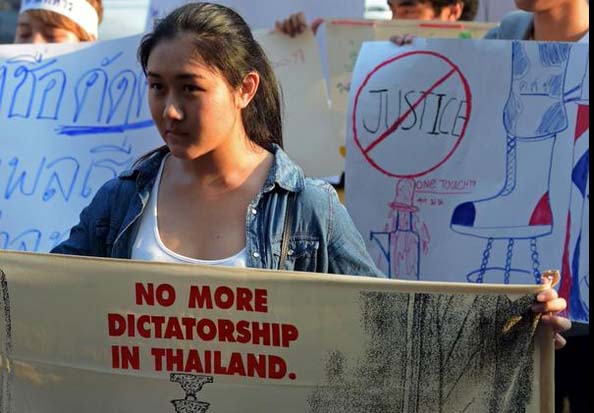 There is a persistent theme in Thailand’s ongoing political crisis often touted by one side of the spectrum: the call for the “good people” or barami in Thai. Barami, a Buddhist term for “charismatic power” or “meritorious prestige,” has historically been linked to the Thai concepts of power. In an increasingly polarized Thai political and societal reality, frustration with unstable and often scandalous governments has led to a popular political rhetoric that centred on the need for “good people,” implying that the democratically elected leaders of the country fall short of basic moral standards.

The crisis that started in the mid-2000s and the protests against then Prime Minister Thaksin Shinawatra led to the revival of barami. PM Thaksin was as popular among the electorate in the rural North and Northeast mostly due to his populist policies, as he was loathed by the upper-middle class and the political establishment in Bangkok for his illiberal tendencies. The latter ultra-nationalist group, commonly known as the “yellow shirts” saw Thaksin as a perversion of electoral democracy and desired a leader, who is “morally clean” above anything else.

The next decade saw many, at times undemocratic, changes of governments. Thaksin is now in self-exile, but he still wields considerable influence. After several street protests, two military coups, and clashes between political stakeholders, those calling for a takeover by the “good people” got what they asked for with the coup of May 2014 - or so they thought. The military that sees itself as part of the “good people” took firm control of the political discourse by outlawing public gatherings, detaining dissenting opponents, and enforcing a high degree of media censorship.

The National Council for Peace and Order (NCPO), as the junta officially calls itself, oversees nearly all branches of government. Most NCPO members are also members of the cabinet, most notably former army chief, junta leader, and Prime Minister General Prayuth Chan-ocha. The NCPO appointed most other government bodies, including the National Legislative Assembly (NLA) acting as the ersatz-parliament, the National Reform Council (NRC), which hands out political and legislative recommendations, and the Constitutional Drafting Committee (CDC). The limited political freedom the packed CDC enjoyed while drafting the new constitution became even more obvious last week, when the NRC proposed a striking 129 revisions to the draft the Committee presented in April. Nevertheless, the CDC is confident that it can incorporate all amendments and forward the final draft to the NRC for approval by July 29.

The new constitution is supposedly designed to re-balance the lopsided party landscape, introduce more checks and balances, and crack down harder on corrupt politicians. However, the underlying political motivation appears to be to curtail the power of elected officials and to transfer power to unelected ones. All junta actions seem to point in the direction of diminishing the electoral strength of Thaksin-associated political parties, which have won all national elections since 2001, and of fueling people’s contempt about electoral democracy in general.

To create a new power structure in Thai politics and governance, the junta uses the new constitution to change the electoral system entirely. If passed, a Mixed Member Proportional (MMP) system would replace the old First Past The Post (FPTP) system to fill the new 450-470 member House of Representatives, the lower house. 250 of the seats would be awarded through direct majority voting in the electoral districts, while the 200-220 seats would be filled from the party lists to compensate for any disproportionality. While the CDC Draft left open the questions of electoral threshold and overhang seats; it appears that even with the proposed electoral system in place, the 2007 and 2011 elections would have led to the same results. Reincarnations of Thaksin’s original party, like the People’s Power Party and its successor the Pheu Thai Party (For Thais Party), would still have won and smaller parties would not have closed the gap to the two largest parties. The new election system could become a deal-breaker for the main opposition Democrat Party, which has not won an election in 20 years, but would have a reasonable chance to come second in the polls in most constituencies. Under altered parameters, the Democrat Party could go as far as eating up the gap to its rival, forcing the Pheu Thai Party to build a big multi-party coalition to keep the upper hand. Thai multi-party coalitions prove rather unstable though, as they have rotated or collapsed 25 times between 1975 and 2001. What looks like an opportunity to even the playing field can very well disguise another attempt to stack the cards against the Pheu Thai Party, having roughly half the electorate on its side. This could feed into the junta’s mission to prevent a “parliamentary dictatorship,” something critics have often attributed to the elected governments since 2001, especially to the Pheu Thai government of the ousted PM Yingluck Shinawatra, Thaksins’s sister.

The proposed election system faces other challenges as well. A recent opinion poll found that a large percentage of respondents do not fully understand the new system or fail to understand it at all. Another underreported issue is that without a minimal electoral threshold, small and micro parties could enter parliament increasing the chance of fragmentation and eventually unstable multi-party coalition governments. Even more curiously, “political groups” will also be allowed to contest at the polls, including those that have rallied against the very concept of electoral democracy and its values - only to see them suddenly running for office. Given the myriad of color-coded protest groups that have taken politics onto the streets in the past decade, one can only wonder about the number of groups that might contest. Among those are the obstructionist groups whose anti-democratic rhetoric beleaguered the Yingluck government and amounted to the 2014 military coup with relative ease. With that in mind, the most partisan Election Commissioner in recent history, showed an extra-long ballot paper to demonstrate the potential flood of participating parties and groups at the next election and warned that counting the votes would take days.

In the midst of political maneuvering, the relevance of changing the electoral system should not be downplayed. As political interests tend to solidify around and respond to the incentives of the country’s electoral system, the replacement of the FPTP with the MMP system will surely affect the future political landscape of Thailand.

After the military coup of 2006, the junta’s then-interim constitution provided for a referendum on the next draft constitution. This referendum went in favor of the 2007 constitution, 58 to 42 percent. Eight years, another coup and constitution later, it is even more unclear whether the people will have a say about Thailand’s 20th constitution. The military junta, preoccupied with micro-managing the country, was adamantly against a referendum fearing a rejection of the draft charter. But, after many vocal calls by civic groups, sidelined politicians from both sides of the spectrum and even the NRC and CDC members, the NCPO and the cabinet decided to hold a referendum, courtesy of an upcoming amendment to the current interim constitution.

But there is a catch or two: at the time of writing, it is unknown how much of the draft constitution will be put up for a vote, as a NLA-member suggested that only “critical points” should be voted on, instead of the whole draft. The junta’s Deputy Prime Minister, Wissanu Krea-ngam, suggested that the referendum will not even be held until January 2016. The other trade-off for the referendum is that democratic elections will be pushed back even further. Elections once promised for late 2015 and then postponed to early 2016, are now more likely to be held sometime in September 2016. The biggest catch, however, remains to be the risk of rejection. Junta leader and Prime Minister Gen. Prayuth threatened to stay in office until the people accept a new constitution, thus further delaying new elections.

The mantra of the new constitution appears to be “moral.” The charter recognizes a variety of rights and freedoms, including the right to human dignity, religion, expression, assembly, media and academic freedom or the right to join a union. Yet, most of these rights are guaranteed only as long as they are not contrary to “public order” or “good morals.” While the legal formulation common to qualified rights might have a familiar ring; as with most legislative and legal issues in Thailand, the problems are not necessarily in the wording of the law but in its interpretation and execution. Since the “good people” and their allies are more self-righteous than morally sound in their political worldview, the definition of “good morals” is left to whoever claims sovereignty - currently the military government.

Many Thais think ensuring “good morals” in Thai politics is an oxymoron or a Sisyphean task at least. Yet, the new constitution creates the National Moral Assembly that must prepare a Code of Ethics requiring politicians to “establish efficient mechanism and system for enforcement… as well as procedure for punishment according to the gravity of violation.” However, with the contents of the Code of Ethics unclear and the members of the National Moral Assembly unknown, the Assembly’s partisanship remains an open question. This doesn’t stop the proposed constitution from entrusting the Assembly with choosing selection committee members, who will vet Constitutional Court judges and Election Commissioners. The obscurity around such a key institution seems to fly in the face of transparency and good morals from the outset.

In his 2002 paper discussing the historical context of barami, Patrick Jory concluded that this concept of power survives in Thai political discourse “as a relic of the former moral-political system of belief of which it was once a part.” Jory likely did not anticipate that, a decade later, the ultra-nationalists would pick up and adapt his idea to their crusade against the “perversion of democracy.” Anti-democratic forces, such as the military, have consistently used the rhetoric of “safeguarding” Thai democracy to ram through their contradictory and hypocritical vision of how the country is supposed to be ruled and run. It becomes a problem when anti-democrats are suddenly arbiters of “goodness.” Case in point: During their endless discussions, the constitutional drafters also included a clause in the draft charter that would absolve the military junta from any wrongdoing and would effectively grant them an amnesty - as has been customary in previous coups. How long did it take them to deliberate? 30 seconds!