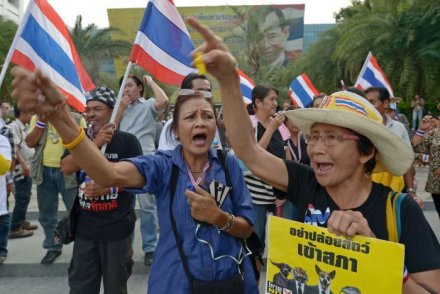 Anti-government protesters shout slogans as they gather at in front of the Constitutional Court in Bangkok on November 20, 2013. (Credit: AFP)
<div class="node-teaser"><p>&nbsp;</p> <p>Thailand's Constitutional Court has ruled that government efforts to amend the constitution were illegal, but has stopped short of dissolving the ruling party.</p><p>The court ruled five to four that the amendments, supported by the Puea Thai Party and its coalition of lawmakers, violated the country's charter.</p><p>"The judges dismissed the petition to dissolve the political parties," Constitutional Court judge Jaroon Intaracha said, reading the ruling.</p><p><span style="font-size: 1em; line-height: 1.5em;">But he criticised the process of pushing through a proposal to amend the constitution to make the Thai senate a fully-elected body.</span></p><div>[toc hidden:1]</div>
Read the full article here: Radio Australia