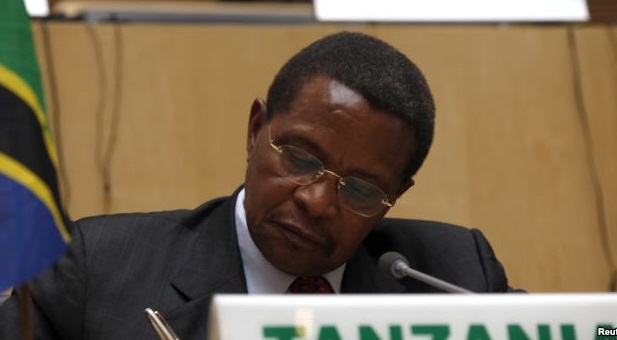 Tanzania's President Jakaya Kikwete is in serving his final term

Seeking to allay fears that the quorum needed to vote on the draft was not met, the Minister for Justice and Constitutional Affairs, Dr. Asha Rose- Migiro, had indicated that of the 630 members provided for in the law, 500 members (79 per cent) remained in the Assembly, including 348 members from the Mainland (125 being from the 201 group of members who were appointed by decree to the body) and 152 members from Zanzibar (64 being from the 201 group). The Minister concluded that members who boycotted CA sessions from either side of the union were less than one third of all CA members.

There were at least five court cases--with others still pending-- against the process in the CA in various parts of the country. Among the most prominent were those filed by Saed Kubenea, a prominent journalist,  and the Tanganyika Law Society (TLS).

Mr. Kubenea asked the Court, in his petition filed on 22 August, to ascertain if the CA was legally constituted and secondly, whether its amendment of proposals contained in the Second Draft Constitution tabled by the Constitutional Review Commission (CRC) was within the CA’s powers of improving the proposed text under section 25 of the Constitution Review Act. On the first question the Court ruled in the affirmative while on the second the court opined that the extent to which the CA could change provisions of the Draft tendered by the CRC was a political exercise.

The TLS also challenged the composition of the CA, arguing that that the direct appointment of Members of Parliament to the CA violated the fundamental right of citizens to choose their representatives. A decision is pending on the application.

Outside the courtrooms, questions also continue to be raised on the entire constitution making project. For instance, whereas the Constitution Review Act and all its subsequent amendments provided for a secret ballot system at all stages of the review process, the CA approved a mixed voting system of both open and secret ballot. This has been criticised as an attempt to rein in renegade elements who would want to vote according to their conscience rather than to party diktat.

Controversy has also dogged the actual draft constitution vote in the CA.  Whereas emerging contemporary practice is to vote on the draft constitution article by article, the CA chose to adopt the text in one block, a move that has been criticised by experts such as Prof. Chris Maina Peter from the Zanzibar Legal Services Centre (ZLSC). In its defence, the CA Chair, Samuel Sitta, argued that any other alternative would have delayed the process by at least a year.  Put otherwise, there was no time.

If anything, such a defence only reinforces the view in some quarters that this process, which is often perceived as rushed, has been more about securing personal legacies—from the President of the Republic to the CA leadership. Referring to comments attributed to Samuel Sitta in various local papers where the latter maintains the CA’s task was more important than the CRC’s, Prof. Mwesiga Baregu, a political scientist and former member of the CRC has argued that the CA Chair wants the new Constitution to have his imprimatur as the Sitta Constitution, thereby denying the CRC any credit for its contribution.

In recent weeks, claims of voting irregularities have also surfaced. Some CA members who did not vote in favour of the constitution, such as Haji Ambar Khamis, a   Zanzibari representing the National Convention for Construction and Reform (NCCR- Mageuzi),  have contested the listing of their names on the published copy of the proposed Constitution, which bears the names of all those who voted. Others have focused on the mathematics that supposedly resulted in the two-thirds majority. The Tanzania Constitution Forum (TCF), for instance, has claimed that a CA member, former Minister Zakia Meghji, who is originally from Zanzibar but was appointed as a special seat MP to represent the Mainland, was wrongfully listed as a representative from Zanzibar. TCF sees the placement of Meghji’s name under the Zanzibar list as deliberate effort by the ruling party to obtain the required two-thirds vote from Zanzibar that was necessary to pass the draft. Doubts also persist about two ‘No’ votes that are alleged to have been recanted. While this is not meant to cast doubt on all the votes taken in the CA, it does call into question the transparency and integrity of the voting process.

A further contention is the CA’s decision to allow remote electronic voting, enabling some CA members travelling outside the country to vote on the Proposed Constitution via email, fax and sms. Noting that the legal framework does not allow this, some critics have challenged the procedure, labelling it as a desperate attempt by the ruling party to obtain the votes required to pass the proposed Constitution. The legal basis of this method of voting is yet to be determined.

This is the question preoccupying all stakeholders now.  According to the Constitutional Review Act, the referendum should be held within 84 days of the delivery of the proposed constitution to the President. In principle, this would mean sometime in December this year, as the President officially received the document earlier this October. The National Electoral Commission, which under Article 31(1) of the Constitution Review Act should organize and supervise the referendum,  is sceptical that  the country has the capacity to hold such a vote anytime soon, as voter registers still need to be updated.

‘Going into a referendum or any election without updating the register would lead to protests from politicians and the general public,’ NEC Chair, Damian Lubuva—who estimates the process will take up to May 2015— said in  an interview.

Taking into account this concern, President Kikwete and the Tanzania Centre for Democracy reached an agreement on September 8 to the effect that the referendum should take place after the 2015 General Elections, preferably in April 2016.

The President has since recanted the agreement explaining that he cannot interfere in a process that is mandated by law. Meanwhile, government officials have been issuing contradictory statements to the local press on the Referendum date with March and April 2015 being the most quoted. None of these or any other date is officially confirmed. Yet, one reason why a referendum conducted before the elections is more likely—especially when one also factors in the legacy concerns raised earlier— may be related to the term limits provision of the current Constitution.

Presently completing his second term, President Kikwete is constitutionally barred from running for re-election in the next polls—traditionally held in the last week of October during election year. This means he will have little influence on what happens to the constitution review process under a new administration.  Organising a referendum earlier certainly gives the President more leverage on the process—and perhaps even the outcome. In addition, an early referendum will make it harder to reverse any potentially unfavourable court decisions on pending legal challenges, even if only in the interest of stability, as the Opposition would be faced with a fait accompli.

Notwithstanding the above and what the actual referendum date eventually turns out to be, it is important to note a number of unsettling issues that might still impact whether or not the planned referendum will take place. One is that the Proposed Constitution needs to also pass in the Zanzibar legislature by at least a two thirds majority in the first and second readings, as per Article 80 of the Zanzibari Constitution. The ruling party controls 39 seats and the Civil United Front (CUF), has 31 of the 81 member legislature.  A further 11 members are appointees of the Zanzibari President. Even if these 11 members were to vote with the ruling party, they will still not obtain the two-thirds number, absent floor-crossing in the CUF. As the latter has for the most part boycotted the process, this is unlikely to happen. Secondly, as mentioned earlier, decisions from ongoing judicial proceedings are pending. How these unresolved issues will affect the direction of the next phase of this process is left to be seen in the weeks and months ahead.