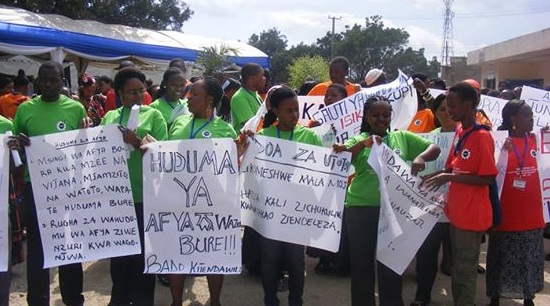 In some ways, the process, so far, has been able to meet the expectation generated by the increasing focus on women’s issues—at least at the very minimum level: Commendable efforts were made to achieve gender parity among civil society representation in the Constituent Assembly. Out of the 201 seats assigned, women occupy 100. Substantively, the preamble of the Draft Constitution being debated—and its directive principles of state policy— include broad statements of intent to uphold a constitutional order that does not discriminate on the basis of gender or other difference.

Articles 21 to 25 of the most recent Draft Constitution released in December 2013 recaps basic provisions on equality and non-discrimination. The main provision championing women’s rights is Article 47 which has two sub-articles. Sub article one guarantees women respect of their dignity; freedom from oppression; equal pay for equal work; protection from discriminatory laws and harmful traditions; labour protection for reproductive function; and access to health.  The second sub article commits to creating the environment necessary to realise the rights outlined in the article. Women’s organisations such the Wanawake na Katiba (Women and the Constitution) Coalition—an alliance of over 50 women’s rights organizations across Tanzania advocating for a women friendly constitution—have taken an active lead in mobilising to secure women’s interests in the new Constitution.

The Coalition’s Chair, Prof. Ruth Meena, stresses that the objective is to ensure that all gains made in the Draft Constitution remain in the final product. Its present occupation— she adds— is to extend the liberation struggle but with an emphasis on women’s emancipation. The Coalition has outlined 12 key demands, one of which is that Article 113 (3) of the Draft Constitution—which provides for 50-50 representation of women in parliamentary elections—go further and indicate a gender criterion in the election or appointment of all leaders.  In practice, this means constitutionalising zipper system rules, which call for alternation of male and female candidates’ election or appointment procedures.

However, a close reading of gendered discourses in the review process indicates that, in the new dispensation, a gender revolution may prove elusive. Several reasons explain this.

Judging by recent statements from the government, some of these demands and moves do not sit well. Speaking to the Press during the commemoration of International Women’s Day, for instance, Tanzania’s Deputy Minister of Community Development, Gender and Children Ms Pindi Chana claimed that abolishing Special Seats for women after the 2015 General Elections is tantamount to burying the 50-50 policy because Tanzania has not reached a stage to do away with special seats for women.

Article 66 (1)(b) of the 1977 Constitution, it has to be recalled, established the Special Seat system which provides for a 30% quota for women. Those opposed to it argue that they are incompatible with a competitive political system. In Tanzania, Special Seats have been dominated by a few well-connected individual women who are seen to champion partisan interests more than women’s interests.

But women who have benefitted from Special Seats fault the system for denying them a political base.

In addition, rifts in perspectives about what women’s struggles should focus on are discernible in the contributions made by female members in the CA.

“Some female members of the CA are calling for the new [Constitution] to allow customary and religious law to govern personal law issues”, exclaims a CA female member in dismay and frustration over the complicity of key female figures in women’s subordination.

“We had great expectation that the more enlightened among us would provide leadership in our quest for gender justice. But the opposite is true. Some of them are the main gatekeepers of the status quo”, she adds.

Her desperation and disgust are not without cause: Articles 8 and 9 of the draft Constitution, read together with the guarantees provided by Article 47, represent key progress for the advancement of women’s rights in Tanzania. Their affirmation of the principle of constitutional supremacy strengthens the protections for women’s rights by voiding ‘any tradition [and] custom’ that is inconsistent with the Constitution’s provisions. By interpretation, this must include Article 47 protections—notably those protecting women from discrimination, spite, dangerous customs and undignified treatment. Existing Tanzanian customs, traditions or religious practices can hardly be described as being consistent with the content of Article 47. So, for some women to seek to maintain the status quo under the guise of cultural or religious relativism is to undermine the overall value and rationale of the supremacy and women’s rights clauses.

Prof. Meena has implored women in the CA to put aside all differences and work together to defend the interests of women.

Substantively, women are also taking issue with the omission of provisions addressing reproductive health, included in the CRC’s initial draft.

“While health care is a universal need, women have a specific need to reproductive health as evidence by the high rates of maternal morbidity in the country”, observes Valerie Msoka of the Tanzania Media Women’s Association (TAMWA).

The removal of an explicit mention of women’s reproductive rights should, however, be understood in light of clandestine agendas to subdue women’s rights. The question of limiting women’s reproductive freedoms has been a core concern of the Church and her affiliates at all stages of the constitution review process through statements that condemn abortion, Family Planning or any policy arrangement that is deemed to empower women.

Compounding the issue is the fact that women’s numerical strength has not translated into effective political participation and representation. For instance, while many women attended the public forums, only 26% of women gave their views to the Commission compared to 78% of men. In many localities social taboos restricted women from speaking before or in the presence of men. Only one third of the CRC were women. In the National Assembly and the Zanzibar House of composition, women representation is far less than that of men—at 36% and 33% respectively.

In the current CA, with an estimated membership of 629, women have only about 38% of the seats. Likewise, none of the 21 registered political parties have a woman in their top leadership positions. This translated into few women appointees into the Assembly as mostly the party heads—also predominantly men—were appointed. This has created an environment where few women even dare to contest leadership positions, as seen in the elections for the Interim Chair of the CA, where only one out of four candidates was female. Many feel more comfortable contesting for running mate positions as seen during the elections for the deputy CA Chair, where the only two candidates were women. The pattern is also reflected at the CA Committee level. Women chair only four out of fourteen Committees, while there are 10 female vice chairs, suggesting that it is easier to accept women as deputies but not at the helm.

Even UKAWA, which purports to defend the peoples’ constitution, is guilty of this incongruity. ”Women are not visible in the leadership or in their rhetoric”, notes Mary Rusimbi, Director of the Women’s Fund in Tanzania.

In the end, male perspectives dominate discussions and the content of the Proposed Constitution, making it less likely that attempts at gender balance will be achieved.

All odds aside, how effectively are women championing for their issues in the CA? The concern with abortion, early marriage and women’s dress indicates that women’s reproductive role remains the major prism through which womenfolk are viewed. Across the board, women’s status is not linked with the operating standard but with their maternal and community roles. This may be the reason CA members who are breastfeeding formed a coalition - to the dismay of some and admiration of others.

The ideological divide between women indicates that real change in the realm of gender equality may be a long way off if they don’t heed Prof Meena’s advice to put aside their differences. As their agendas remain polarized, women are failing to influence key spaces or to explore potential allies outside the familiar. Instead, they remain prisoners of their own petty ambitions.