Tanzanians to vote on proposed Constitution before July 2017 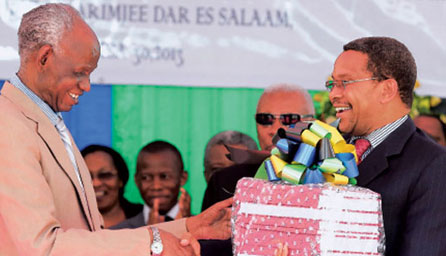 Former Tanzania President Jakaya Kikwete receives the second draft constitution from Constitutional Review Commission chairman Joseph Warioba (photo credit: Emanuel Herman)
<p>In the next financial year referendum would be one of the top priorities of the Constitutional and Legal Affairs ministry.</p><p>Minister Harrison Mwakyembe said the government will be proceeding with the referendum and people will be voting on the Proposed Constitution likely before July 2017 whether to accept or reject the controversial document passed by the Constituent Assembly (CA).</p><p>A section of the society will be disappointed with this as they had made calls to President John Magufuli to set aside the Proposed Constitution for a fresh process.</p><p>Meanwhile, the former Constitutional Review Commission (CRC) chairman Joseph Warioba said the president fight against corruption would get boost if his commission’s Draft Constitution is to be considered.</p>
Read the full article here: 24 Tanzania