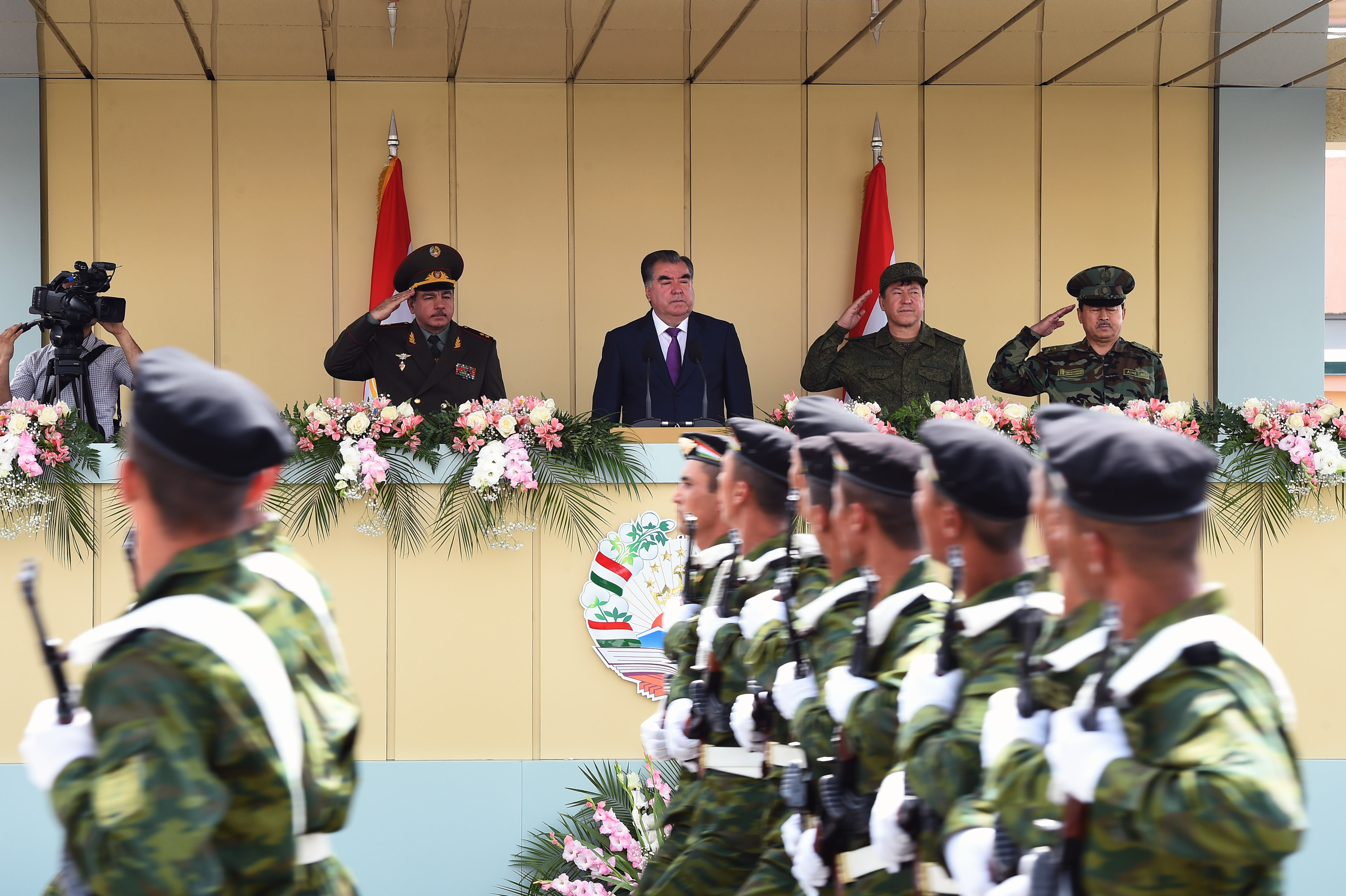 The latest constitutional amendments in Tajikistan conclude the pattern of monopolization of power in the person of President Rahmon. The narrowing of political space and the targeting of a moderate faith-based party impede legitimate dissent, potentially augmenting the already rising influence of radical Islamic groups.

On 22 May 2016, a reported 95% of Tajik voters approved an array of 41 changes and additions to the Constitution of Tajikistan which abolished term limits for current president Emomali Rahmon, lowered the age requirement to be president, and banned the formation of faith-based political parties. The referendum marked the last nominal hurdle to the enactment of the amendments. The executive-authored reforms were passed by Tajikistan’s rubber-stamp parliament in January 2016 and subsequently approved by the Constitutional Court.

The reforms, which were voted on as a single package, are a thinly veiled power grab on the part of the current regime designed to afford Rahmon a lifelong grip on the presidency. With radicalization already on the rise in this majority-Muslim country, closing off avenues for legitimate political dissent could increase the influence of radical religious groups.

Towards a lifelong presidency and dynastic power

Rahmon has worked assiduously to consolidate power since he was installed as president of civil war-wracked Tajikistan in 1994 by ex-Soviet power brokers, who also pushed through the nation’s constitution. Two previous constitutional referendums — one in 1999, the other in 2003 — likewise strengthened the authority of the executive by extending the presidential term from five to seven years, removing the upper age limit for the presidency, and increasing the presidential term limit to two terms.

This most recent referendum is remarkable for the brazenness with which it has cemented Rahmon’s personal stranglehold on power. The reforms exempt the "Leader of the Nation," a title bestowed uniquely upon Rahmon by Parliament in December 2015, from all term limits. The “Leader of the Nation” is also allowed to overrule cabinet decisions after he leaves public office. Even if Rahmon decides not to stand for president again, he will continue to be able to exercise almost unlimited control over Tajikistan’s de facto one-party system. Lowering the age requirement to be president from 35 to 30 years clears the way for Rahmon's son, Rustam Emomali, to run for president in 2020, when the latter will be 33.

Tajikistan was formerly the only Central Asian country to permit religiously-grounded political parties, a status legitimized in the 1999 constitutional referendum as part of a power-sharing agreement between parties to Tajikistan’s civil war, fought in part along religious versus secular lines. The ban on religious parties sounds the death knell for legitimate political opposition in Tajikistan by directly targeting the Islamic Renaissance Party of Tajikistan (IRPT), Tajikistan’s only real political opposition and, until recently, the country’s second-most popular party by membership.

The IRPT was ejected from Parliament in the March 2015 election decried as unfree and unfair by international observers. The government then blamed the IRPT for orchestrating what it called an “attempted coup,” outlawed party membership, labelled the IRPT a terrorist organization, raided its offices, and imprisoned party officials. Its leader, Muhiddin Kabiri, was forced to flee the country. As a formal party, the IRPT has been decimated. This constitutional amendment merely prevents it from regrouping under another name.

The amendment also bans atheist political parties — a stab at Tajikistan's feeble Communist Party, which has only two seats in the lower house of parliament but occasionally voices mild opposition to the government.

False hope for an independent judiciary

Even the one constitutional reform supported by international governing bodies is unlikely to result in positive change. The abolition of the Council of Justice has been championed by the UN since 2011. On paper, the Council is charged with nominating candidates for judicial positions and ensuring the independence of courts. In practice, the Council serves as an instrument of executive control over the courts, reporting directly to the President. After its dissolution, the Council's duties will likely be remanded to the Supreme Court.

In the short term, doing away with the Council might create more problems than it solves. In particular, it poses problems for legal accreditation in Tajikistan — a system currently struggling under the weight of new legislation which makes it harder for lawyers to renew their licenses. So much harder, in fact, that Tajikistan is currently home to just over 400 licensed defense lawyers serving a population of roughly eight million — roughly 30% of the number of lawyers operating in Tajikistan before the law took effect.

The legislation obliges all lawyers in Tajikistan to immediately renew their legal licenses by taking a bar exam under the purview of the Ministry of Justice. But with the dissolution of the Council of Justice, the Ministry’s licensing and accreditation committee does not have the quorum necessary to continue renewing lawyers’ licenses, or even to administer subsequent bar exams. The test itself is likely a smokescreen to mask the regime’s real intention of disbarring lawyers who defend opposition figures, according to Human Rights Watch, which called the new accreditation legislation a step “to extend [government] control over the legal profession, significantly curtailing its independence.”

The Tajik legal profession is therefore in limbo, with the majority of formerly accredited lawyers unable to practice and without a clear sign as to when they might be able to renew their licenses. But the brunt of this blow falls on Tajik defendants, who suffered from a shortage of attorneys even before the enactment of the new accreditation legislation. “Right now, lawyers are like the bone in the government’s throat. They can’t swallow us, but they can’t spit us out either,” said Qayum Yusufov, a member of the national Bar Union and an advocate for legal reform in Tajikistan. “The international treaty framework to which Tajikistan is party ensures that the government can’t do away with lawyers altogether. But they will put so much pressure on us that it becomes almost impossible to do our jobs.”

While the government may have nixed the Council of Justice to appease international observers, the general trend of consolidation of power under the executive indicates that the reform is unlikely to free the courts from presidential control. On the contrary, local sources speculate that the president’s cadre will continue to hold the courts in an iron grip, one way or another.

The constitutional reforms also take symbolic aim at the role of political parties in governing the country by adding language to the constitution specifying that Tajikistan is ruled by its president. Other noteworthy measures lower the age limit for parliamentary candidates and judges in the state's highest courts, and designate children the legal caretakers of their parents. The amendments also forbid dual citizens and persons without a university degree from holding public office, and ban political parties from accepting contributions from foreigners.

The Constitutional Court noted in an official statement that “the presented amendments and additions in their totality fulfill the highest values of the Constitution and reflect the process of political democratization.” Despite the acclamation, the government in Tajikistan is an increasingly autocratic regime masked by a farcical democratic process.

A murky shoot-out in the nation’s capital in September 2015 between government forces and a former opposition leader was cast as a failed coup attempt and used as an excuse to crack down even harder on anti-regime voices – especially the IRPT, which the government alleged backed the coup. No evidence has come to light to support the government’s claims. NGOs that receive foreign funding have come under fire on the pretext that they are agents of foreign regimes. Human rights lawyers have been jailed and prosecuted for defending opposition members.

The Tajik government has cracked down particularly hard on religious expression in the past year. In addition to targeting the IRPT, the state has introduced harsher bans on Islamic dress — going so far as to arrest and forcibly shave men with beards, claim that the hijab is “for prostitutes,” and shut down stores selling modest clothing — and stricter limits on mosque attendance. The U.S. Department of State recently downgraded Tajikistan to a “country of particular concern” with regard to its oppression of religious freedom.

Growing popular disenchantment with the regime?

Despite a months-long get-out-the-vote campaign urging Tajiks to vote if they have “a will and a conscience,” polling stations were oddly empty, confounding the government’s claim that 92% of eligible voters cast ballots. Radio Ozodi reported that some Tajiks refused to go to the poll booths because they simply did not see any point, and a majority of Tajiks surveyed in an informal Radio Ozodi poll did not even know what the constitutional reforms were.

Western international governance groups have decried the Tajik referendum as taking place in a vacuum devoid of opposition voices, public debate and adequate voter information. Meanwhile, observers from the Commonwealth of Independent States and Shanghai Cooperation Organization, two groups with long records of ignoring election abuses, praised the conduct of the referendum.

The constitutional amendments largely formalize the de facto centralization of power in the hands of the president, ruling elite and party. Regionally, other Central Asian rulers have similarly turned to referendums in order to reinforce increasingly autocratic rule under a veneer of democracy.  In the past two decades, referendums that strengthened the power of a reigning president have been carried out in Uzbekistan, Kazakhstan and Kyrgyzstan. Similarly, Turkmenistan is hatching a constitutional amendment that would remove the maximum age limit on the presidency.

In the short term, the current Tajik regime is likely to continue cracking down on opposition sentiment, civil society and religious freedom. But the long game is anyone’s guess. Radicalization has been on the rise in Tajikistan: Since the start of the conflict in the Levant, at least 1 000 Tajiks have allied with ISIS. The constitutional reforms and continued government repression of religious expression may further exacerbate extremist tendencies. By all assessments, Tajikistan stands teetering at the brink of a long, dark way down.

The contributor is an independent journalist based in Tajikistan.