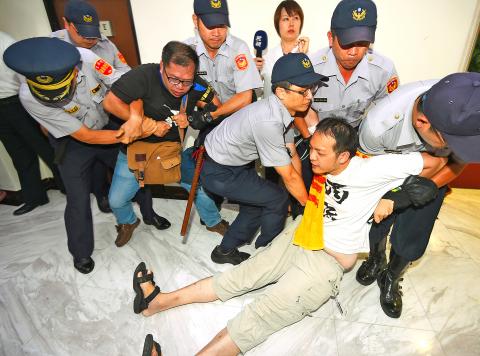 Protesters in the Legislative Yuan [photo credit: Chang Chia-ming, Taipei Times]
<p>Interparty negotiations over constitutional amendments broke down again yesterday, with young protesters, angry over the Chinese Nationalist Party’s (KMT) refusal to separately review controversial amendments on the last day of the legislative session, attempting to storm into KMT caucus whip Lai Shyh-bao’s (賴士葆) office.</p><p>The Legislative Yuan had its last plenary meeting yesterday, which was already extended for the legislature to pass the amendments in time for a referendum on the reforms to take place alongside the presidential and legislative elections on Jan. 16. The failure to pass the amendments means the referendum will not take place as planned.</p>
Read the full article here: The Taipei Times