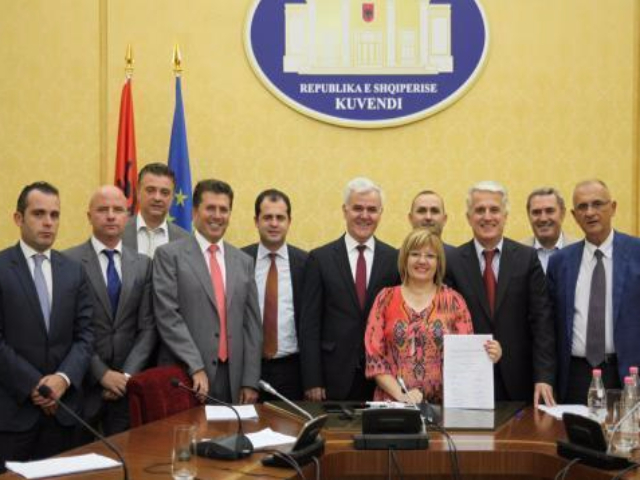 On 22 July 2016, during the early morning hours, Albania’s parliament amended the country’s constitution to make way for a long awaited and far - reaching justice reform. The reform revamped the justice sector’s system of governance,. The key changes included a massive transfer of powers from the executive towards the judicial council, the creation of new body of inspection empowered to inspect alleged misconduct of judges, prosecutors, and other justice system officials, the decentralization of the prosecutorial system (thus far heavily centralized in the person of the Prosecutor General), the introduction of the Justice Appointments Council (and advisory body designed to increase the quality of high ranking justice officials), the introduction of special structures for the prosecution and adjudication of corruption, modeled after Croatia’s USKOK and Romania’s DNA, and introduced a transitional, one off, vetting system designed to scrutinize the integrity and professional proficiency of sitting judges and prosecutors.

The vote to adopt the reform was unanimous, which had never occurred before in 25 years of Albanian democracy. The main political leaders and representatives of the international community promptly hailed the amendments as the dawn of a new era for rule of law in the country.

Despite the fanfare of the voting day, the process that led to the July 22nd vote was acrimonious. Indeed, the run up to the July 22 reform was marred by a bitter political struggle and the threat of early elections (in case the reform would not pass).

Despite the political controversies, the necessity to reform the justice system was genuine and broadly shared. Many factors fed into the sense of necessity and urgency for judicial reform among the public, politicians and Albania’s foreign friends. To begin with, for many years Albania has trailed other countries in the region (themselves viciously prone to corruption) in public perception surveys of judicial corruption.

Other credible proxies such as court users’ satisfaction surveys, peer reviews, European Union Progress Reports; Council of Europe and OSCE resolutions and reports, United States government official declarations and documents, and scholarly analysis, systematically suggested that the judiciary was in major need of reshuffling due to lack of integrity, professionalism and independence.

To address mounting concerns over the state of affairs in the country’s justice system, in late 2014, Kuvendi, the Albanian parliament, resolved to deal decisively with the problem by launching a far-reaching justice sector reform. The rationale for the reform was simple but compelling: continued failure to reform the judiciary would threaten the very foundations of democracy and market economy.

Retrospectively, it is not particularly clear where the enlightenment (or political momentum) to embark upon such a bold reform came from. After all, Albania’s politicians are routinely, and rightfully, seen as the main culprits when it comes to the miserable state of affairs in the judiciary. Despite such reasonable skepticism as to the role of the political class, it must be noted that the idea of a broad and profound justice reform, that would tackle endemic corruption and lack of professionalism, first surfaced as an electoral promise in the run up to the parliamentary election of June 2013. However, once in power, the left wing coalition realized the daunting complexity of the task. To begin with, proponents of judicial reform bitterly woke up to the “reality of numbers”. It became soon clear that any significant justice reform would entail constitutional amendments. Although, all sides of the political spectrum converged that there was a pressing necessity to reform the justice system (and the major reform objectives), there were strong divergences concerning the process to be followed and, at a later stage, the actual solutions. In the face of such discordances, the political support needed to have the reform passed could not be taken for granted. The number of votes in parliament simply was not enough for the government, the main proponent of the reform. Although, the ruling left wing coalition commands a vast majority in parliament, the number of the needed “yes” votes was significantly short of the required two-thirds constitutional amending majority (by 8 votes). These worrying calculations were exacerbated further by the refusal of the opposition to take up its seats in the parliamentary ad hoc committee on justice reform.  Eventually the opposition joined the process thus paving the way for the adoption of the amendments.

What seemed to be an obstructionist stance by the parliamentary opposition came as no surprise. Over the last 25 years, the conduct of politics in Albania has never been consensual. Even the applicable constitution of 1998 was adopted unilaterally during a brief period of political hegemony of one side combined with the relatively lax provisions of the 1992 interim constitution regarding constitutional amendment. Although the applicable 1998 constitution was amended 3 times with broad parliamentary support, only the amendments of 2008 and 2012 were significant in terms of the ability of the political system to produce consensual politics (meaning majorities bigger than those supporting the incumbent cabinet). In 2008, the main political parties agreed to revamp the method of election of the President of the Republic, the procedure for the vote of confidence of government and the term in office of the Prosecutor General. The amendments of 2012 represented a tailored intervention to limit the immunity of senior public officials from criminal prosecution. However, the 2008 amendments, brought about a huge negative effect on the judiciary by worsening one of the symptoms that triggered the justice reform in the first place: the politicization of the judiciary. Indeed, the 1998 Constitution imposed a method of election of the President of the Republic, which forced the parliamentary groups to either agree on a candidate or disperse the parliament and go to elections. The rationale of this formula was linked to the role of the President of the Republic in the governance of the justice system. To put it simply, under the 1998 constitution (before the latest July amendments), the President of the Republic would appoint all judges (including the judges of the Constitutional Court), all prosecutors and serve as head of the High Council of Justice, the ultimate body of judicial governance. This position of power was justified by the fact that the President belonged to no political side and that s/he enjoyed vast political legitimacy due to the consensual method of election ordained by the constitution. Indeed the 1998 Constitution required the votes of 3/5 of the members of parliament to elect the President of the Republic. Failure to obtain the required majority would lead to the dissolution of parliament and new elections. Following the 2008 amendment of the presidential election formula, it is now possible to elect the President of the Republic with the votes of the incumbent government (albeit after several rounds in which a larger majority is required). In view of the changing political profile of the president’s office, “pruning” his powers vis-à-vis the justice system became a burning issue.

The changing profile of the president’s office, a toxic perception of corruption and reliable indicators attesting a severe lack of professional proficiency among Albania’s judges and prosecutors combined to push justice reform to the very top of the public policy agenda.

In view of the anticipated political difficulties (both the lack of sufficient “yes” votes and the absence of a tradition of consensual politics), it took some political genius to design a setting within which the entire reform process would take place. In the words of the Chairman of the Parliamentary ad hoc Committee on Justice Reform, the original idea underpinning the formal structures that would deal with the reform, both at a technical and political level, aimed at 3 objectives: the first aim was to avoid any sign of unilateralism in the constitution making process. This necessity was served by vesting all decision making power with the parliament (rather than the cabinet). Indeed, on December 2014, the parliament voted to establish the ad hoc committee on justice reform with equal representation between the ruling coalition and the opposition.

The second aim was to involve independent experts in the process of researching, drafting and communicating with the public until a draft was ripe for political deliberations. This may sound easy and obvious but in a small country like Albania with a meager supply of independent liberal professionals and civil society actors, it can be difficult. To serve this need, the ad hoc committee resolved to invite all justice sector institutions to delegate their best people to the technical group of experts that was established under the auspices of the ad hoc committee. Indeed, the Constitutional Court, the High Court, the Office of the Prosecutor General, the Minister of Justice, the Ombudsman, the School of Magistrates, the National Bar Association and the University of Tirana forwarded their best legal minds to work on the reform.

The third aim was to involve the international community in the process from the first day in the hope that their equidistance for the political sides and expertise would help to boost the quality of the reform and, more importantly, alleviate the profound lack of trust among the political factions.

This carefully elaborated setting was reinforced by an agreement that the Council of Europe’s Venice Commission would review and analyze the draft amendments and provide recommendations thereon. The parties agreed to consider the Commission’s opinion as a final judgment in case of discordance over particular issues or proposed solutions.

The group of experts soon proved itself to a very effective format for the necessary research and drafting work. The most important international assistance projects in the justice sector were represented in the group of experts, which was for all practical purposes a bilingual forum. All documents were produced in both English and Albanian. Freed from any political constraint (this was only true in the early stages of the reform process), the group of experts produced a compelling analysis of the shortcomings of the justice system, both at a regulatory and implementation level.

Based on the findings of the analysis, the group of experts proceeded to prepare a thorough justice reform strategy, which laid out the identified problems, the main standards and best practices in a given field, targets and a detailed action plan of proposed interventions to achieve those targets.

Finally, following the completion of the first 2 stages of the process (the preparation of the analysis and the strategy/action plan), the drafting work of the group of experts began. According to the proposed draft of constitutional amendments, nearly 1/3 of the Constitution’s provisions were to be amended.

Despite many political compromises which affected the original proposals of the group of experts (in some cases quite substantially and for the worse), the overall architecture of the new Albanian justice sector elaborated by the experts is both revolutionary and very promising. Currently, the Albanian parliament is busy passing the laws (seven of them) that detail the new constitutional provisions on the justice sector governance, the anti – corruption set up and the vetting structures. I am confident that this Albanian reform will be remembered for a long time and replicated in other countries due to its institutional innovations and laudable process.

Gent Ibrahimi is the Director of the Institute for Policy and Legal Studies in Tirana, Albania (www.ipls.org)