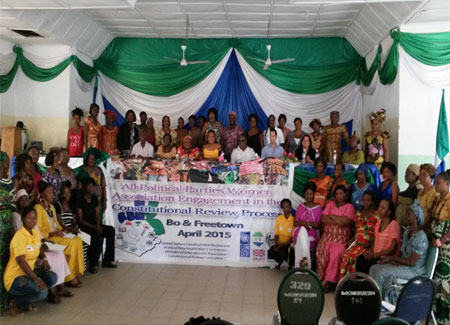 Photo credit: Awareness Times
<p>Commissioner of the Political Parties Registration Commission (PPRC), Alhaji Muctarr B. Williams on Tuesday 21st&nbsp;April 2015 assured the membership of the All Political Parties Women Association (APPWA) of the Commissions support in the realisation of inputs recommended in the constitutional review process.&nbsp;</p><p>&nbsp;</p><p>He made this statement at the end of a two days sensitization on the constitutional review process held in Bo for the south and the eastern regions.</p><p>&nbsp;</p><p>He advised them to ensure that their political parties include in their constitution a gender policy that will allow women to be involved in the decision making process of their parties.</p><p>&nbsp;</p>
Read the full article here: Awareness Times