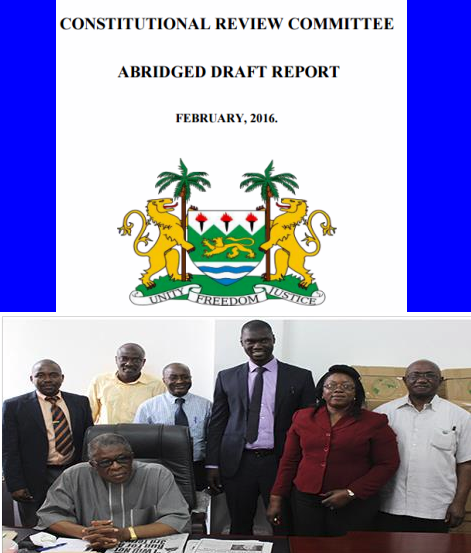 Members of the Constitutional Review Committee (photo credit: thisissierraleone)
<p>The CRC has published an abridged version of its First Draft Report containing proposals for an amendment of the Constitution of Sierra Leone Act No 6 of 1991.</p><div class="text_exposed_show"><p>Key issues proposed include the following.&nbsp;<span style="line-height: 20.4px;">Four New Chapters have been developed-</span></p><p>1. Local Government and Decentralization</p><p>2. Lands, Natural Resources and the Environment</p><p>3. Citizenship</p><p>4. Information, Communication and the Media</p><p><i>5.</i>The Office of Attorney General separated from the Minister of Justice</p><p><i>6.</i>&nbsp;Local Council Elections to be conducted every 5 year instead of four</p><p><i>7.&nbsp;</i>Local Council Elections to be non-political</p>
Read the full article here: This is Sierra Leone

Antoni Abat 17 February 2016
Can we read the whole report ?
Adem Abebe 17 February 2016
Hi Antoni, yes you can read the (abridged) draft report, which contains the proposed amendments, by clicking on the link at the end of the news update. The full report has not been released yet. You may subscribe to our Newsletter to receive updates on constitutional developments in Sierra Leone and around the word here: http://www.constitutionnet.org/subscribe