Security vs. Liberty? The Tunisian Democracy as a Litmus Test of the fight against Terrorism 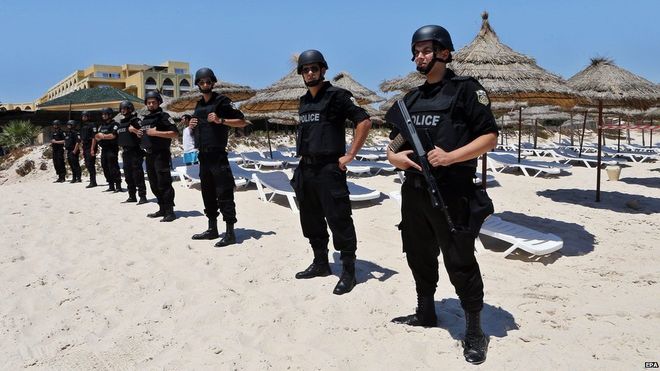 Armed members of Tunisia's security forces were deployed to the beach at Sousse for a ceremony of remembrance one week after the attack (photo credit: BBC)

Among the Arab countries that have experienced revolutions since 2011, Tunisia is the only one that managed its process to a state of democratic transition. Other countries have sunk into civil war like Libya or instability and political violence, like Egypt. The establishment of a secular state and the adoption of a democratic constitution guaranteeing human rights has made Tunisia a target of terrorist networks that seem to be willing to do anything to prevent this model from succeeding and becoming "contagious" across the Arab region. The degree of vulnerability of each State and its response to this scourge are affected by several factors, including the nature of the political system, the state of institutions, the degree of social cohesion, economic development or the culture. Tunisia is particularly vulnerable to terrorist attacks due to its young institutions and fragile democratic achievements, a serious economic crisis, well-established terrorist networks and porous borders in a turbulent regional environment.

The terrorist attacks of Bardo and Sousse marked a profound turning point. They have clearly caused a mixture of indignation and panic among the public prompting the Government to announce a series of measures to protect the population and state institutions. The Government immediately put in place heightened security measures and introduced a new Anti-Terrorism law within a month, while along the Tunisian-Libyan border it started the construction of a wall in order to circumscribe the infiltration of fighters and the smuggling of weapons and people. A few days after the Sousse attack, the President declared a state of emergency to be re-introduced amidst heated debate. Some people saw it as an adequate response to the terrorist threat, while others stressed that it risks undermining the rights and freedoms of citizens, in light of an upsurge of police intervention against demonstrators.

State of Emergency - in and outside the constitution

The legal context that accompanies the recent developments in Tunisia has given cause for confusion. First, the state of emergency announced by the president is implemented under the presidential decree of 1978, which is still in force even though it is contrary to the new constitution. Back in 1978, the decree was issued to quell demonstrations demanding more union freedoms and social justice. At that time, the state of emergency aimed to oppress the population, today it aims to protect the country against the terrorist threat. Second, some also thought that the anti-terrorism law adopted in 2003 under the Ben Ali dictatorship was abolished after the revolution and the adoption of the new constitution but the law remained in force until the adoption of the new Anti-Terrorism Act of 25 July 2015.

The transitional provisions of the constitution that set the implementation deadline in six months for the Supreme Council of the Judiciary and in one year for the Constitutional Court are now unlawful. The deadline for the Supreme Council of the Judiciary already expired and the Constitutional Court is to be established by November; however, given the slow progress with the draft law on the Court the deadline is unlikely to be met.

The legal regime of the state of emergency introduces restrictions on freedom of movement, the prohibition of social movements and protests, to mention but a few. However, according to the new constitution, restrictions on constitutionally guaranteed rights and freedoms can only be imposed in the form of a law. The decree is therefore in contradiction with the constitution that has given rise to sharp criticism by opposition parties and civil society groups.

While the Anti-Terrorism Act has become emblematic in the current state of emergency, its legal framework is completely separate and is currently governed by the new Anti-Terrorism Act of 25 July 2015. This Act is not the first of its kind in Tunisia. The former dictatorial regime of Ben Ali adopted an anti-terrorism law in 2003 - an instrument symbolizing the regime’s repression. Marking a break with the past, the 2015 law emphasized that action against terrorism must be conducted within the framework of the 2014 constitution and Tunisia’s obligations under international human rights law. Indeed, in some respects, the new law is a step forward compared to the 2003 Act. Yet, it is widely feared to jeopardize the democratic achievements of the 2011 revolution.

The Act requires wiretaps and surveillance to be authorized in writing by a judge, judge of inquiry or prosecutor chosen for their competence and experience in the fight against terrorism. A procedural guarantee that is tainted by perceived influence of the executive on prosecutors in Tunisia. Both prosecutors and investigating judges can authorize and supervise the listening and monitoring operations. This decision shall specify the telecommunications that are subject to interception, its reasons and its duration. The interception can be authorized for a period of four months, while the surveillance for two months and can be extended for the same periods respectively by a reasoned decision. If the collected data is not likely to give rise to criminal proceedings, the guaranties of the personal data protection law will apply. The law also provides for assistance for victims of terrorism and the prohibition on the extradition of the accused to countries where they risk torture. However, the new legislation is full of loopholes that can undermine several rights and freedoms. For example, the detention in custody can be extended for up to 15 days without access to counsel. The law also introduces the death penalty for certain terrorist crimes (Articles 25-29). Two emblematic measures not even permitted under the 2003 Act under the dictatorship.

The vague definition of certain terrorist crimes: an act that “infringes on public or private property, vital resources, infrastructure, means of transport and communication, computer systems or public services” risks a broad and potentially arbitrary interpretation. The mere fact that someone damages the private property of his/her neighbor, or an employee dissatisfied with working conditions sends a virus to his/ her colleagues’ computers could be considered as terrorist crimes. There is also the possibility, if the judge deems it necessary, to hold trials behind closed doors and to leave a large discretion for the judge to decide when to disclose the identity of certain witnesses or victims. Besides that, the law does not define with sufficient precision the ‘apologia’ for the crime of terrorism. Any public praise for terrorist acts, terrorist organizations, related ideas or opinions is prohibited – leaving the possibility open for wide restriction of freedom of expression, speech and media.

Nevertheless, the extent of the threat the state of emergency and the anti-terrorism legislation poses to human rights can only be assessed within the current Tunisian political context.

Tunisia has been under a state of emergency from 2011 until 2014 under the 1978 decree. At that time, terrorist attacks have not prevented holding hundreds of peaceful demonstrations - most famously in Bardo following the assassination of MP Mohamed Brahmi, when the opposition demanded the dissolution of the National Constituent Assembly. However, since the state of emergency was re-introduced on 4 July 2015, the government has banned and disbanded demonstration by force and cases of torture were reported against persons detained in police custody.

To some, these recent tendencies are the harbingers of an authoritarian regime in the name of the fight against terrorism and maintaining security. As the current government enjoys two-thirds majority in the Assembly of the People's Representatives, a return to non-democratic governance or even to authoritarianism seem to be realistic possibilities. With this comfortable majority, the government can adopt all the laws it wants. Theoretically, the future Constitutional Court will oppose unconstitutional laws, although there are doubts about the independent exercise of its review function, since 8 out of the 12 judges of the court will be appointed by the President of the Republic and the Assembly of the People’s Representatives respectively.

With a poor parliamentary opposition and a civil society and media constrained by the state of emergency, there will be no counter-powers that could bring the government under control and place limits on the exercise of its power. Another, even more concerning, consequence of the terrorist attacks has been the development of an anti-freedom rhetoric among part of the population. It is feared that the government takes advantage of this state of mind to play on people’s fear and Tunisia’s democratic political process will end up imposing excessive limitations on the rights and freedoms of Tunisians in exchange for security. We must never forget how the notion of security was (ab)used to consolidate the Ben Ali dictatorship - turning out to be a fallacious and misleading argument.

Today, the combination of the state of emergency and the Anti-Terrorism law brings several limitations to the rights and freedoms of citizens. The state of emergency, among others, allows for limitation on citizens’ right to freedom of movement, residence or assembly along with a general ban of strikes and social movements. The Anti-Terrorism law introduced additional limitations on the right to privacy and data protection, when wiretapping or monitoring are decided by a prosecutor and not by a judge; on the right to a fair trial and since custody can last as long as 15 days without access to counsel; or on the right to life since the law provides for the death penalty.

In view of all these rights at stake, the state of emergency must be lifted as soon as possible once the security situation allows for it. Meanwhile, the security forces must respect the right to assembly and peaceful demonstration. The Constitutional Court should be established as soon as possible and its members should be chosen for their competence and independence in order to ensure respect for the constitution. The sections of the Anti-Terrorism Act that fail to respect the standards of the 2014 constitution as well as international human rights norms must be revised, for the people to feel that Tunisia does not derail from its democratic path, as only a true democracy can ensure both freedom and security to its citizens.