The road to hell is paved with good intentions: how the special status for Donbas will destabilize Ukraine 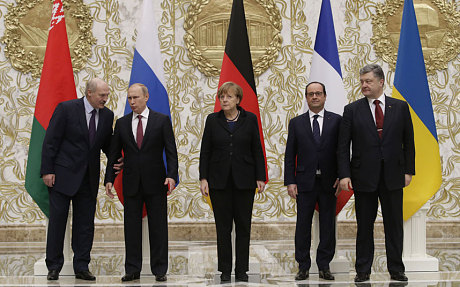 Recent developments from the frontline in the Donbas region of Ukraine send a strong signal that the Minsk II Agreement proved to be a rather unsuccessful resolution. The 13-point Protocol, which was the result of lengthy negotiations aimed at halting the escalation of conflict in Eastern Ukraine in early 2015, has now become a “phantom” diplomatic agreement - existing on paper but in practice is constantly violated.

It seems that today the main battlefield for Western diplomats is not the Donbas but rather Kyiv. Here the fate of the eleventh provision of the Minsk Protocol - stating that Ukraine has to make changes to its constitution in terms of decentralization and special status for the Donbas - will be decided by the parliament in September 2015. This is against the backdrop of an ongoing conflict in the east and significant external pressure to sign the deal and end the conflict. Ukrainian intellectuals, volunteers, activists and ordinary citizens are united in their opinion: as long as Donetsk and Luhansk People’s Republics (DNR/LNR) forces control Donbas, there can be no special status given to those areas. Despite Western pressures on Ukraine to fulfill its obligations, granting special status to the Donbas is likely to destabilize the social and political life of Ukraine.

Following negotiations on  decentralization reform, Ukraine now faces the challenge of implementing Point 11 of the 2015 Minsk Agreement, which requires granting “special status for particular districts of Donetsk and Luhansk oblasts”. The risks are high. On the one hand if Ukraine doesn't change its constitution it will be accused of violating the Minsk Agreement. This might result in a decrease in both political and financial support to Ukraine. On the other hand fulfillment of the Minsk Agreement will negatively affect the level of political support for President Poroshenko and his coalition due to the high level of criticism on the proposed changes. Long-term implications are even more dangerous, including political destabilization of Ukraine and demands of other regions to have similarly wide powers. No wonder the president is trying to “manipulate” the situation to satisfy both sides. He is trying to show the West that Ukraine is a reliable partner and at the same time assure Ukrainians that the proposed changes will not destabilize Ukraine internally.

The political implications of implementing the Minsk Agreement

The draft constitutional amendment provides that a special status law will determine local administration in the Donetsk and Luhansk regions. This creates a number of outcomes and concerns. Firstly, in the eyes of many Ukrainians, the granting of special status to the regions in the Minsk Agreements is tantamount to rewarding activities to destabilize law and order in Ukraine. Secondly, this decentralized power is feared to give an unevenly beneficial weighting to the regions in their say over national political affairs. Thirdly, the granting of special status to some regions will only spur other regions to follow suit and seek to claim the right for autonomy from Kiev.

Rewarding revolt: decentralization as an incentive for armed insurgence?

The very idea of a special status granted to the Donetsk People's Republic (DNR) and the Luhansk People's Republic (LNR) controlled territories is perceived as a humiliation in Ukrainian society. To understand this attitude it is enough to go through the existing law on the special status. The main provisions include: special mechanisms for the formation of local self-governments that apply for three years; amnesty to all participants of the Donbas conflict; local administrations will be able to take part in the process of appointment of local judges and prosecutors; Kyiv will be obliged to give full financial and social assistance to the region and; local police units will be formed and will be under the control of local authorities.

These provisions are perceived as a legitimization of the current regime, which controls parts of the Donetsk and Luhansk regions, giving them official recognition and the right to rule. This is an outcome that is difficult to reconcile with the official Ukrainian position toward the region. The official policy line of Kyiv has been that the activities in Eastern Ukraine have been acts of terrorism. To reward the granting of official status to these actors in response to their actions presents an incongruent outcome to recent history. For a nation that has already lost over 6 thousand soldiers, has millions of displaced citizens, suffered huge economic losses and destroyed infrastructure, those special conditions granted to the Donbas will be very hard to swallow.

In terms of the impact in the Donbas region itself, there are more than 1.3 million internally displaced persons already. Most of those people have left the not only because of the shelling and ongoing fighting, but also because of their pro-Ukrainian position. DNR is using historic KGB practices of prosecution, interrogation and torture towards those who supported the Ukrainian army and who claim that the Donbas should remain Ukrainian. This situation will not be changed by putting Ukrainian flags back on the streets. It will be changed by people, who would be willing and would know how to reintegrate the Donbas back into Ukraine. However, as long as the DNR and its people stay, there will be no possibility for pro-Ukrainian supporters to work on reintegration, or to go back home.

Ukrainians worry about the potential veto power of the Donbas when it comes to important domestic and foreign issues. The option of veto power was previously proposed (and rejected) in the ‘Kozak’ memorandum. This was a Kremlin-produced document aimed at managing another Eastern European frozen conflict in Transnistria, the border region of Moldova and Ukraine that declared its independence after the dissolution of the USSR but its statehood remains unrecognized by any UN member states. Despite the break-away attempts resulting in the 1992 War of Transnistria, the region remains part of Moldova as an autonomous territory. With growing regional tensions for over a decade, the Kozak memorandum was put forward by Russia in 2003 proposing Moldova to be transformed into a federal state and establish a new federal Senate. The Kozak memorandum provided for a disproportionate amount of senators to be elected by Transnistria (9 out of 26) that would have given to them a veto over constitutional laws. Among other issues this veto power could also have been used to block constitutional reforms necessary for EU accession. Although the Kozak memorandum was never implemented, there is fear among Ukrainians that something similar may be proposed in Ukraine. By failing to clearly outline the powers of the Donbas authorities, a future parliament could, with a simple majority, extend powers to a level in which they could potentially block any important decisions of the central government.

Voting for changes to the Constitution will have political implications for the ruling coalition. Local elections will take place on October 25 and could be a crucial step in bringing the Party of Regions – the pro-Russia party of former President Yanukovych – back to power. Granting special status to the Donbas is presented as a weakness of the ruling political elites. It would result in the deepening of the conflict and accompanied by the poor economic climate could be used as a symbol to show how ineffective and unsuccessful the current coalition is. Ukraine has been blighted by a high level of dissatisfaction with the current government, the lack of needed structural reforms, ineffective combatting of corruption and the economic crisis. Therefore a positive performance at the local elections for the Party of the Regions could signify that the next parliament will not have such a strong pro-European coalition. By "punishing” the current authorities for its unsuccessful performance, Ukrainians might bring the Party of Regions back to power. Importantly, there is also no third significant party that would be in opposition both to the authorities and the Party of Regions, therefore limiting the scope of competition in the elections.

Special status and the proliferation of claims to autonomy

Granting special status will have immediate implications not only for the Donbas, but for the rest of Ukraine as well. This is especially true when it comes to the Zakarpattia region, which has a rich ethnic diversity with a particularly strong Hungarian minority. Zakarpattia, which is the youngest Ukrainian oblast, historically used to belong to the Austro-Hungarian Empire and was perceived as a core land of Hungary. The outspoken political leaders in Zakarpattia might look at the deal for the Donbas and ask for more autonomy as well. That is particularly dangerous taking into account the position of Hungarian officials who support pro-autonomy appeals of Ukrainian Hungarians. Another region that is fragile due to its geographical position is Bessarabia, the southern part of the Odessa region that shares borders with Moldova and Transnistria. If Transnistria would ever want to gain access to the sea, Bessarabia is its only access point, and special status for Bessarabia might serve these purposes. Having previously noted the controversies surrounding Transnistria, granting special status to Bessarbia could unbalance the political power dynamics within the region, and within Ukraine.

True intentions of the West?

Ukrainians do not understand why Western partners put such pressure on the fulfillment of the Minsk Agreement provisions regarding changes to the constitution, while at the same time ignore the fact that other points are constantly violated by the eastern regions. Unlike many Westerners, Ukrainians understand that the war is not about the status of the Donbas or the decentralization of Ukraine but rather about Ukraine acting in defense of its territorial integrity and against the latest Russian attempt to further impose its sphere of influence over the country. The aim is to move Ukraine further to the West and away from the East. Changes to the constitution will not stop the bloodshed and will not withdraw Russian troops from Ukrainian soil. This is why Ukrainians see support from the West for special status within the constitution as a sign of giving up on Ukraine’s territorial integrity. It merely represents a desire to downgrade the conflict from an international conflict to a domestic one.

What can be done?

The issue of the special status creates more obstacles than opportunities for domestic political life. The root of the problem does not lie in Ukraine itself, but in the Minsk Agreement, which has obligated Ukraine to certain goals and at the same time is not securing the de-escalation of the conflict. Instead, the best scenario will be to accept that the Minsk Agreement has failed and to set up another round of negotiations and work on a new document. If the international community continues to push Ukraine, it will only bring a lack of trust between its partners and dissatisfaction of Ukrainians that will lead to reconfigurations on the geo-political landscape of Ukraine – and not for the better.

Kateryna Kruk is a Ukrainian activist, political scientist and journalist. In 2014 she was awarded the Atlantic Council Freedom Award for her work communicating the EuroMaidan Revolution to the world via Twitter.