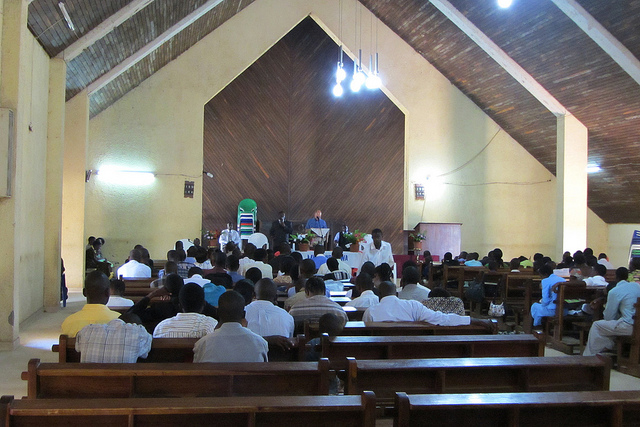 The impasse gripping the constitution review process has been largely attributed to hijacking by partisan politics. However, there are other polarizing issues, which have not been in the limelight much, but nevertheless, pose an equally dangerous threat to Tanzania as it seeks to carve a new constitutional pathway. Religious bigotry or ‘udini’—as the proliferation of debates on the issue in online fora such as Jamii Forum, Mwana Halisi and Udadisi  suggest— is emerging as a key one. This is unsurprising. Existing research suggests that religion is a key aspect of Tanzanian life with some 93% describing it as ‘very important’ in their lives.

The Gender Development Seminar Series (GDSS), a weekly forum hosted by the Tanzania Gender Networking Programme, sounded the alarm earlier in the process when monitoring elections  the Mabaraza ya Katiba or the constitutional councils convened at the Ward level across the country. The GDSS reported that the whole electoral process for the councils was infested not only with corruption, intimidation, and gender discrimination but also infectious ‘udini’ rhetoric.

Originally, consideration of religious issues in the Constitution was confined to calls to acknowledge God, as seen in the preambles of the Constitution of Uganda (1995), Kenya (2010), and South Africa (1996). The Draft Constitution issued by the Constitutional Review Commission (CRC) instead chose to emphasize religious impartiality (article 1(3)) and the freedom of belief under article 32. But the persistence of overt and covert religious agendas in Tanzania’s constitution review process is flaming rhetoric that undermines Tanzania’s identity as a secular state.

Christians and Muslims alike are guilty of spreading divisive religious rhetoric. The dominant position traditional churches—Lutheran, Anglican, but in particular, the Catholic Church—enjoy on Tanzania’s political stage is resented by other Christian denominations. The popular belief in Tanzania is that the Presidency, for instance, is not open to just any Christian. Past presidents were all Catholics, like Nyerere and Mkapa. Within the National Assembly, Catholics occupy 76% of the seats while other Christian groups occupy only 18%. This has resulted in some commentators drawing a link between leadership positions and denominational affiliation. A Catholic priest, John Sivalon, has validated this view in a publication that analyzes the Catholic Church’s grip on Tanzania’s political destiny. Pentecostal Church leaders, as I have demonstrated elsewhere, are critical of this dominance by traditional churches, especially that of the Catholic Church.

For the most part though, the contentious rhetoric has been between, rather than within religions. For instance, Muslim women appointed to the CA protested against public swearing in ceremonies that involved using the Koran on the grounds that it ignores their state of purity at the moment of the oath. Islam forbids touching the Holy Book in the state of impurity. Further, Muslims decry their under representation in both national politics and the constitution review process as compared to Christian –predominantly catholic –groups. Analysis by Mohammed Said, a Tanzanian blogger and writer, shows that Christians make up 94% of the National Assembly while Muslims have only a mere 6% of the seats. This is in a country where, according to some estimates, the Muslim and Christian populations are approximately equal in size—each accounting for between 30 and 40%.  From the 201 members appointed to the CA, Muslims—Said further maintains— are also outnumbered across all the main groups from which appointments were made. This is particularly the case with appointments from predominantly Christian Mainland as the table below shows:

On their part, Christians denounced what they viewed as an overwhelming representation of Muslims on the CRC. In all fairness though, had Zanzibar—for which there was a need to ensure equal representation on the Commission— not appointed 14 Muslims to its 15 Seat quota to add to the five Muslims appointed from the Mainland, Muslims would not have had the uncharacteristically high representation in the body. In other words, the overwhelming Muslim representation was more by accident than design. Besides representation, Christians also disparaged as unconstitutional and discriminatory the practice of allowing only Muslims to slaughter meat in abattoirs (kuchinja) on grounds that it denies them employment opportunities in abattoirs on account of their faith rather than competence.

For some members of the CRC, religious concerns may have appeared insignificant, at first. But its negative potential soon became clear when, shortly before the release of the first draft of the Constitution in June 2013, a highly mediatized skirmish between Muslims and Christians in Tanzania’s Geita Region over meat slaughtered by Christians and sold in a local butchery resulted in several casualties, including one death. Since then, the rhetoric has grown, underlining the increasing tension between Tanzania’s Muslims and Christians. For instance, Muslims have demanded that Friday be declared a day of rest, while Christians want religious dress banned in public institutions. Muslims have further demanded that Tanzania either join the Organization of Islamic Countries (OIC) or break ties with the Vatican, since it was secular in nature. Christians, on their part, want to see religious greetings during official business banned.

The presidential succession question is also compounding the issue. A key criticism of the current framework is that while the Constitution provides an overall regulatory framework for power rotation, how this happens and  who sits at the helm of state when and under what circumstances is, in reality, determined by unwritten—and sometimes conflicting— political conventions. By convention logic, therefore, some think the next President should come from Zanzibar since two successive presidents— Mkapa previously and Kikwete currently— are from the Mainland. Others disagree, arguing that the next President should be Christian since the outgoing president is a Muslim who took over from a Christian.

Such sentiments, one may argue, accentuate the divide plaguing Tanzania across religious lines which, if unaddressed, might derail the constitution making process, national unity, and democratic consolidation.

Hon James Mbiata, the Chairperson for the Tanzania Centre for Democracy and of the National Convention for Construction and Reform (NCCR)-Mageuzi, however, thinks otherwise. In his view, the deep mistrust  udini is generating is just a strategy by the ruling party to intimidate and divide the public, especially on key questions of national import. His analysis may not be far-fetched when examining the situation in the context of the impending 2015 General Elections. Like the political succession question mentioned earlier, the elections and recent statements from some quarters of the government seem to provide fodder for the heightened religious interest in the constitution review process.

As  the 2015 elections approach, two of the main Opposition parties from either side of the Union—the Civic United Front (CUF) and the Chama cha Demokrasia na Maendeleo (CHADEMA)— have decided to come together, sending shock waves to the ruling party, the Chama cha Mapinduzi (CCM). CCM’s fear is that in the event that the proposed three-government structure—which the Opposition supports— wins the day, the CUF, associated with militant Islamism, will take Zanzibar, and CHADEMA, mostly Lutheran, will take Tanganyika. This will leave the ruling party at the head of a powerless union government.

This is creating panic within the ruling party. In response, CCM is instrumentalising religion to divide the opposition and incite fear in the public. While speaking at the ordination of the new Archbishop of the Methodist Church in Dodoma in April, for instance, William Lukuvi, the Minister of State in the Prime Minister’s Office for Policy, Co-ordination and Parliamentary Affairs, warned that “a three government structure would result...in Zanzibar becoming an Islamic state where Christians would be persecuted.”

Many of Tanzania’s Muslims find this view rather ironic. Apart from arguing that they have been the biggest victims of systemic discrimination by the state, they point out that Christianity penetrated the hinterland through Muslim towns- Bagamoyo and Zanzibar. Sivalon’s publication, mentioned earlier, lends some credit to their claim.

The tension and divide plaguing Christians and Muslims is not only threatening national unity. It is usurping the constitution making process and alienating other minority religious groups. These include, for instance, Baha’is, Hindis, traditionalists and many other non-aligned groups whose only desire may be to have a new Constitution in a Tanzania where secularism is recognised not only in theory but also in practice.

Various Church leaders, like Bishop Bundala of the Pentecost Holiness Association Mission, have called for unity and solidarity and for the national interest to be placed ahead of religious differences. However, in the light of speeches, especially by the likes of Minister Lukuvi, mentioned earlier, these calls have only been met with scepticism.

On its part, the Tanzania Episcopal Council (TEC) has recently called on all UKAWA leaders who have been boycotting the CA to return to the body without any conditions. Such a call, coming from an institution which is already seen as too implicated in Tanzanian politics, not only translates into sweeping the issues under the rug but worse still, asking people to remain indifferent to a status quo that unduly favours the Ruling Party and its allies in the traditional churches.

Said, who is also a longtime critic of Mfumo Christo—a movement advocating for Christian dominance in Tanzania— has warned that failure to fully acknowledge and address divisive religious agendas does not foretell a good outcome for Tanzanian’s national unity and political future.

In a bid to further defuse the situation, the CA Chair, Samuel Sitta met with the Head of the Catholic Church in Tanzanian and the Head of the Muslim Council to seek their intervention to guarantee that Tanzania gets a new Constitution. Not everyone embraces this move though. Beyond increasing the sense of alienation already felt by other religious minorities, some critics, especially within the media, argue that giving mainstream religious groups any room for influence—direct or indirect—in the process might further compromise Tanzania’s secular nature.

Throughout the process, the government has embraced religious diversity as a demonstration of Tanzania’s ability to co-exist peacefully. This status quo is now being challenged as the   enmity and distrust between the major religious groups grow. Whether and how this will be resolved remains everyone’s concern. Regardless, one thing that is certain is that Tanzania’s new Constitution, when it is eventually finalised, must—if secular co-existence remains a goal— be one that is devoid of and does not favour any particular religious interest.