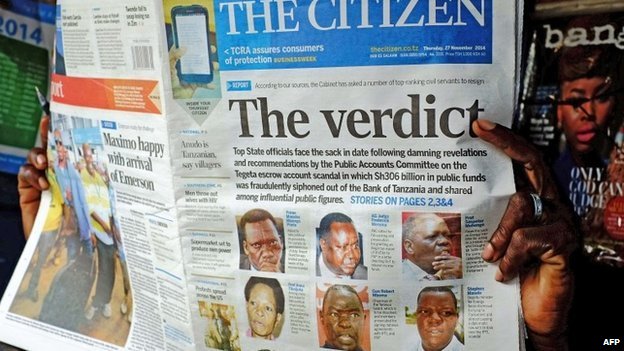 Tanzania is in need of a miracle to get out of the mess it finds itself in after partisan interests derailed the constitutional review process embarked on at the end of 2011. Competing interests within the ruling party, which was originally opposed the constitution review process, as well as among those vying for power in the upcoming general elections have polluted not just the review process but the overall political environment in the country.

The endorsement of the Proposed Constitution by the CA leaves very little room to manoeuvre towards a common middle ground leaving many exasperated. Amid the hopelessness, Humphrey Polepole an ex-member of the Constitution Review Commission (CRC) urges citizens and civil society to refuse to surrender their destinies to a ruling clique that is bent to get their way in dictating Tanzania’s fate.

Crisis over the Constitution’s Legitimacy

Regardless of what the outcome of the Referendum will be, Tanzania will have little cause to celebrate.

The rationale that prompted the rewriting the 1977 Constitution was that it was not enough to fine tune problematic provisions through regular constitutional amendments. More drastic measures were warranted if Tanzania hoped to become a mature democracy. The prudent choice was to engage in a new constitutional pact through a consultative and inclusive process.

Part Six of the Constitution Review Act of 2012 states that if the proposed constitution fails to garner more than 50% of the vote in the Referendum then Tanzania will continue to use the 1977 constitution. This rejects the previous hope that, should the referendum fail, concerns agreed with the Tanzania Centre for Democracy would be incorporated into a major constitutional amendment before the next elections.

Additional concerns over the legitimacy of the Proposed Constitution (PC) include the fact that it departs significantly from the CRC Draft which is being defended as encompassing the will of the masses, as it was drafted after countrywide public consultations, and before it was passed to the political forum of the Constituent Assembly. The disregard of popular views by the CA is one of the key reasons behind the Katiba stalemate.

The adoption of the PC was also problematic. The CA endorsed entire sections of the PC instead of individual provisions. Also votes that are purported to have passed the PC have been contested as irregularities over tallying have been confirmed. There is overwhelming evidence of foul play with key constituencies planning to challenge the anomalies in court. Therefore, voting for the PC as it is amounts to a political blunder and a constitutional mockery.

Equally there are legal and operational challenges in facilitating the Referendum. For example, the Voter Register is yet to be updated, potentially disenfranchise millions of eligible voters. Similarly, National Electoral Commission (NEC) is yet to outline the modalities between itself and the Zanzibar Electoral Commission (ZEC) in administering the Referendum in light of the fact that each side of the union has its own legislation pertaining to the conduct of elections and referendums.

Contextualising the Separation of Powers

Khoti Kamanga, a law lecturer at the University of Dar es Salaam contends that the constitutional review process has brought some of the theoretical constitutional concepts alive. Intricacies of accountable government, which were raised by the populace repeatedly during the review process– have now been brought to widespread public attention due to the botched CA process and the Escrow corruption scandal.

Article 55(4) of the 1977 Constitution requires that Ministers are members of parliament (MPs), yet they are appointed by and accountable to the President, a fact that compromises the notion of accountable governance. And if ministers are dismissed for abuse of office or incompetence, such dismissal does not affect their other portfolios (e.g. chairing important parliamentary committees). Former ministers forced to quit office in the course of their service remain in Parliament where they influence or oversee key policies they may have vested interest in.

Opposition legislators captured the mood of many when they objected to the former Attorney General (AG) Andrew Chenge who was also implicated in the Escrow deal to participate in deliberations that were discussing his fate. Despite his many controversies, Mr. Chenge heads the Parliamentary Budget Committee, and was the Chair of the Drafting Committee in the CA.

Fredrick Werema, the outgoing AG, is also a High Court Judge. His prosecution will however be complicated by the fact that he is a judge of the High Court and thus immune from ordinary prosecution.

Separation of powers was not only relevant with regards to the exercise of power within the three arms of government but also in the fuzzy separation between party roles and representative roles. Members of the CA for example were expected to represent the interests of the groups or constituencies they derived from, but time and time again Party whips influenced decisions of committees as well as of the CA. A similar situation arises with ministers who defend their party’s manifestos instead of the national interest.

Who best to police impunity and excesses?

If one of the key functions of a Constitution is to limit opportunities for abuse of public office, the Escrow scandal comes at a timely moment in exposing public officials who failed to exercise due diligence in handling matters of national and public interest. But other legislators, pushed by partisan sentiments or electoral ambitions, vigorously opposed any action against accused officials in disregard of Article 53 providing for collective ministerial responsibility. Neither the Ethics Council envisaged under Art. 57(2)(g) nor the Secretariat of The Public Leaders Ethics Commission have proved effective in checking official impunity.

Escrow also showed how public officials regularly disregard legal or ethical codes when discharging their functions. During the last parliamentary session for instance, the Deputy Minister for Justice and Constitution Affairs, Angellah Kairuki, at various times, called on the former AG  Andrew Chenge to suggest language that was to be used in Parliamentary resolutions over the Escrow deal in which Chenge was implicated. Even the Speaker did not sound the alarm when this was done until members of PAC and the Opposition objected to it on principle. And even then, ruling party MPs serving in government protested.

The defiance exhibited by cabinet ministers to assume responsibility, symbolic or actual, over lapses or violations has exposed the despotic nature of the political regime. It also begs the question of the utility of Article 53 on assuming collective responsibility. Ministers implicated in Escrow each wanted to be dealt with individually provided that actual intention to abuse their authority was established. In an effort to save face before the local elections ruling party legislators thought it more pressing to negotiate to save the fate of the PM from a vote of no-confidence, instead of defending the constitution, promoting the national interest and the rule of law.

The primary concern of most Tanzanians partaking in different stages of the constitution review process was enhancing the accountability of public institutions and officials. But key provisions of the PC have been rendered toothless by the CA. Kamanga believes that the present leadership crop in Tanzania could not afford to retain the leadership qualities outlined in the CRC Draft Constitution since they hardly measure up.

Among the numerous benefits of the constitution review process aside from increasing political consciousness among Tanzanians is the opportunity to address pervasive impunity in Tanzania’s governance culture. Only wholesale constitutional change – through not only a new Constitution, but one more reform-oriented than the current Proposed Constitution -  can release Tanzania from its present malaise?

Importantly, salvaging the constitution review process requires that Tanzanians must believe that all is not lost, even within the current legal set up. The Proposed Constitution can still be amended if it does garner more that 50 percent voting in favour during the first round of voting on either side of the union, following which it will go to another vote.  Independent voices can influence the content of the problematic provisions at this stage so that the necessary changes are incorporated before the Proposed Constitute is put for the final vote. If no miracles happen in between it is the second stage of voting that will decide if Tanzania adopts a new constitution or remains with the 1977 Constitution.