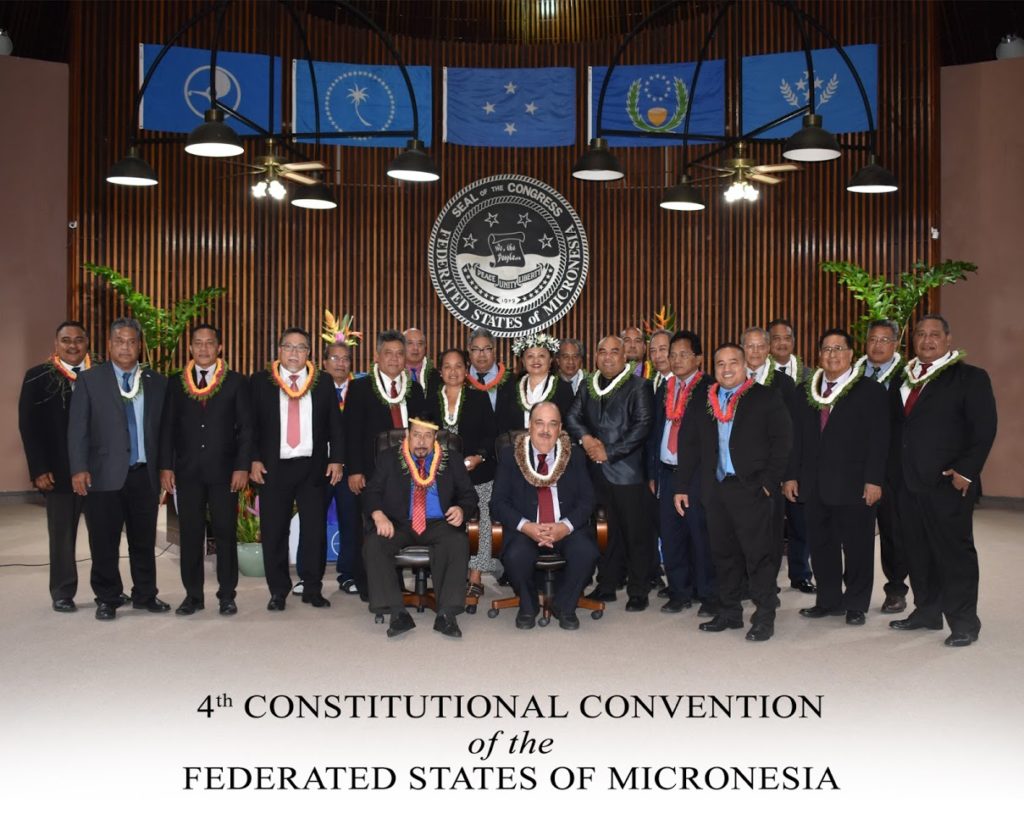 Constitutional Conventions are an integral part of the constitutional amendment process in the Federated States of Micronesia: at least once every 10 years, voters decide whether to inaugurate a new convention that will propose constitutional amendments for referendum. The 4th Convention, while currently on hiatus due to the Covid-19 pandemic, has already approved two proposals that will go to referendum in 2022: allowing dual citizenship and lowering the voting threshold for constitutional amendments. These oft-discussed and intertwined amendments raise important questions about identity and customary land ownership, and are sparking important discussions about the symbolic, practical and legal implications of citizenship in an increasingly globalised world – writes Dr. Gonzaga Puas

The 4th Convention, while currently on hiatus due to the Covid-19 pandemic, is discussing proposed amendments as varied as direct election of the president, revenue sharing, reserved seats for women in parliament, determination of land ownership, and the right to a clean and healthy environment. Two proposed amendments, on allowing dual citizenship and on lowering the passing threshold for constitutional referendums, have already passed the second reading before adjournment, and will be submitted to referendum in 2022.

The Central Role of Constitutional Conventions in the FSM

FSM law specifies that eligible citizens over 25 years of age can seek nomination to be a delegate at a Constitutional Convention. The number of delegates elected for each state is based on population size. The most populous state is Chuuk, with 11 delegates, followed in order by Pohnpei with seven and Yap and Kosrae both with three. Each state also has their own “at-large” delegate.  In practice, the members of the Convention are mainly men, and from the public service, lawyers, and traditional leaders. Each Convention is required to adopt its own procedural and administrative rules. Delegates can introduce amendments individually, or collaboratively with other delegates from their own or other states. In this 4th Convention, there are five standing committees (on civil liberties and traditions; public finance and revenue; government structure and functions; general provisions; and style and arrangement), which have the right to hold public hearings and to subpoena documents and witnesses. After the introduction of a proposal, the president assigns it to the committee or committees with subject matter jurisdiction for discussion. The Congress provides funding for these conventions and sets the terms and duration of each, which differs according to need.

The 4th Convention began in January 2020 but has been in recess since March 2020 because of the Covid-19 pandemic, but before its hiatus it had already drafted 67 proposed amendments, with two—on allowing dual citizenship and on lowering the voting threshold for constitutional amendments—approved after two readings, which await a referendum in 2022.

During the Convention, all delegates vote during the first reading (needing two-thirds approval to pass), while only at-large delegates vote in the second reading. If a three-fourths majority is reached in the second reading, then a referendum is held where approval of three-fourths majority of voters is required. The high amendment threshold has meant that in the past most proposed amendments have failed.

The main amendments of previous conventions have centred on jurisdictional issues between the state and governments, land ownership, and dual citizenship, and the latest convention is no exception.

At the 1990 Convention, 104 amendments were introduced: four were adopted for a referendum and subsequently became part of the Constitution. The 2001 Convention introduced 58 amendments and 14 were put to a referendum, all of which failed. The public is excluded from participating in the Convention’s sessions; however, public inclusion is undertaken during the public education campaigns held before referendums. The main amendments of previous conventions have centred on jurisdictional issues between the state and governments, land ownership, and dual citizenship, and the latest convention is no exception.

History of governance in FSM: the constitutional path to post-colonialism

The Constitution provides the legal framework by which FSM is governed, defining power relations between government organs and the people and the manner in which the Constitution can be amended to alter that dynamic. Colonial tyranny was the backdrop to Micronesians’ desire to establish a constitution, to protect their interests in line with international standards and to assert their independence as a nation with all the rights inherent in such a status. Colonisation underscored the external control of the FSM by undermining the land rights of Micronesians via annexing the islands. In response, Micronesians sought unity as a separate and distinct group of people. The adoption of the Constitution marked the end of colonisation, the country’s independence, and its acceptance in the international community as a sovereign nation.

The process of establishing a constitution for the FSM began in 1975. Political leaders were aware that the people of the FSM had an inherent right to establish a constitution to bind and protect the people as the indigenous inhabitants. Considering that changes in world politics and the economy would likewise affect Micronesian continuity, they included a mechanism for constitutional amendment to adjust to changes in the world that would impact on the nation itself. Constitutional Conventions as a core way to amend the Constitution reflects Micronesians’ acute awareness of colonial imposition. Micronesians want to be in control of their own destiny and to have a flexible constitution that can be amended by the people in line with the changing circumstances of the world. In 1978, the first FSM Constitutional Convention was ratified; subsequently in 1979, the Federated States of Micronesia was created with approval from voters.

In 1986 the FSM gained independence after centuries of colonisation by four different powers: Spain, Germany, Japan, and the USA. The Constitution reasserted the historical and sovereign rights of the traditional inhabitants to their islands within the international legal order. It recognises FSM territorial space as fundamental to the stability and survival of the FSM. Article III, section 3 of the Constitution seeks to ensure stability stating, “…it is the solemn obligation of the national and state governments to uphold the provisions of this constitution and to advance the principles of unity upon which it is founded.” This Article further recognises that unity amongst Micronesians is strongly tied to their relationship with the land and sea as much as it is with one another.

The current Constitution is a hybrid model mirroring democratic practices and at the same time embodies and perpetuates Micronesian history, identity, and continuity.

The FSM’s Constitution is sui generis as it puts Micronesian customary values at its very heart for the purpose of protecting the integrity and sovereignty of the traditional inhabitants. It is a hybrid model mirroring democratic practices and at the same time embodies and perpetuates Micronesian history, identity, and continuity. It reconciles internal differences and asserts a distinct politico-cultural personality. For example, Article XI, section 11 protects the traditions and culture of the FSM by stipulating, “Court decisions shall be consistent with this Constitution, Micronesian customs and traditions, and the social and geographical configuration of Micronesia. In rendering a decision, a court shall consult and apply sources of the Federated States of Micronesia.”

There are two issues that have dominated the current Constitutional Convention thus far: dual citizenship and the lowering of the referendum threshold to pass a constitutional amendment. Dual citizenship highlights the tension between those who support traditions and those who see the issue as inevitable in the globalised world. It is germane to the process of nation building, and the ongoing interaction between Micronesia’s priorities and its engagement with the outside world. Debates about dual citizenship cannot be divorced from concerns about land ownership. According to Jocelyn Howard, CEO of We Are Oceania, “The land defines us, we are very connected to the land . . . It’s part of our being. I think that’s shared among indigenous communities.”

The proposed article would allow a person with one or two Micronesian parents to hold dual citizenship and would restore citizenship to those who formally renounced it or lost it for not renouncing citizenship of a foreign country. Currently, there are tens of thousands of Micronesian expats living in the US alone. This has resulted in many having to renounce their Micronesian citizenship upon attaining citizenship in their adopted homeland. This represents one of the paradoxes of balancing traditional and modern values, as the Micronesian clan system does not rely upon citizenship for inclusion in one’s clan to validate identity. Yet, citizenship is largely predicated upon legal rules. It is this inconsistency that makes dual citizenship a difficult issue to resolve.

It does, however, remain an enduring concept and dual citizenship has been put to referendum more than three times in both previous conventions and by legislation: it failed each time. There are several reasons for this failure. They include the inability to reach the three-fourth threshold majority which was linked to a lack of public education and concerns around land rights (currently only citizens of the FSM may own land, and critics are concerned that dual citizenship would allow “foreigners” to buy ancestral or customary land).

Perhaps to counter this, the delegates to the Constitutional Convention have proposed to the President of FSM a special referendum on lowering the voting threshold to pass a constitutional amendment before any referendum on substantive provisions. This amendment would change the voting majority needed for constitutional amendments from the current three-fourths of votes in three-fourths of the States to two-thirds of the votes in three-fourths of the States. This issue will require debate on its own merits as this would become the threshold for all future amendments, not just the issue of dual citizenship, and the ramifications of that will need to be considered.

Whilst a “young” document in comparison to the ancient history of the FSM, the Constitution embodies the democratic principles that saw the FSM claim its independence, while still honouring traditional customary law and values. It is these themes of continuity and connection that inform the current debates around constitutional amendments generally. Dual citizenship highlights the tension when seeking to strike a balance between tradition and modernity, and law and custom. It is the most debated amendment in the current Convention, but it is highly unlikely to be approved in the next referendum, despite the growing Micronesian diaspora and the benefits associated with dual citizenship. It is therefore inevitable that lowering the three-fourth approval threshold is needed for dual citizenship to be adopted in the next referendum, and this knock-on effect would impact future amendments to the Constitution, including the many proposed changes under consideration in the ongoing Convention, such as direct election of the president, representation of women, and the right to a healthy and clean environment. Nevertheless, a lower threshold could also open the possibilities for abusive amendments that could undermine the fundamental constitutional pacts that enabled the establishment of the FSM.

The author wishes to thank Sharon Pia Hickey for her editorial contribution.