The President’s New Clothes: Will Moldova move to more powers for the head of state? 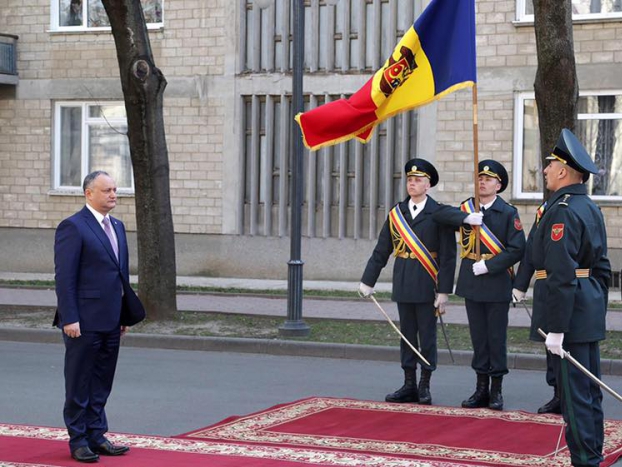 The Moldovan President has proposed constitutional amendments to enhance the powers of the presidency vis-à-vis the Parliament. Considering the political context and the jurisprudence of the Constitutional Court, these amendments are likely to fail and may simply represent a populist and opportunist move to elevate the stature and fortunes of President Dodon – writes Andrei Lutenco.

The Republic of Moldova is currently undergoing important political, economic and social developments against a background of profound economic crisis - exacerbated by an infamous banking fraud of roughly one billion USD. Currently, Moldova has the highest rates of poverty in Europe, causing worrying levels of emigration. Over the years, corruption scandals involving politicians and the judiciary have ravaged the nation. Moreover, democracy itself is at stake, in a nation where the legislature and the Government are seeing ever-increasing low levels of public trust, their legitimacy weakened by MPs moving from one faction to another, while crucial decisions are taken without due consultation with the people and with no accountability for their impact.

The overall situation led to massive protests in 2015 culminating in the establishment of a permanent tent camp in front of the Government building and the creation of two extra-parliamentary opposition parties. The protesters demanded accountability for the “theft of the century”, the dissolution of Parliament and early elections. They also demanded that the people directly elect the President - after the constitutional reform of 2000, MPs elected the head of state. A separate protest camp was pitched in front of the Parliament’s building by the Socialists’ Party (PSRM), which also held the largest share of seats in the Parliament.

Meanwhile, the Parliament assembled a coalition led by the Democratic Party of Moldova (DPM) and voted, in January 2016, for a DPM-led government. While the new Government positioned itself as pro-European and declared its commitment to Moldova’s European integration agenda, the opposition and civil society groups questioned the good faith of the executive’s efforts, claiming its total control by a controversial oligarch (who incidentally is currently the leader of the ruling party).

At the end of 2016, following a decision of the Constitutional Court invaliding as unconstitutional several provisions of the 2000 constitutional amendments that shifted the country from a semi-presidential to a parliamentary republic, Moldovans for the first time since 2001 directly voted for their President.

The winning candidate, Igor Dodon of the PSRM, ran on a pro-Russian anti-oligarchic platform, promising to dissolve the current Parliament and to call for early elections, despite having no legal tools to do so. His critics called his platform populist, a claim manifest during his campaign – empty or inconsequential promises, fake news, misleading allegations and denigration of his opponent were common.

On 28 February 2017, the freshly elected President acted on this campaign promise by submitting to the Parliament a proposal to amend the constitution expanding his powers and providing him with “additional tools to check and control the work of the legislative body”. The draft law introduces a new paragraph to the provision regulating the dissolution of Parliament. The proposed amendment provides:

The President of the Republic of Moldova can dissolve the Parliament in the following cases:

The President did not elaborate on the justifications for these proposals. He quoted other jurisdictions where similar provisions are in place and insisted that the majority of Moldovan citizens believe that the country is moving in the wrong direction, and are therefore in favour of early elections. The President indicated that, if his initiative is not supported by the required 34 votes of the Parliament (1/3 of the elected MPs), he will start the process of amending the constitution through a popular initiative. As he did not find the necessary support in the legislative body, he announced at the end of March 2017 that he will put the issue of expanding the President’s powers to a national referendum, alongside four other proposals.

The Constitution currently foresees two grounds for the dissolution of the Parliament: (1) the Parliament’s impossibility/failure to form a cabinet, and (2) the blocking of the procedure to adopt laws for more than three months. Previously, when MPs elected the President, the Parliament could be dissolved when MPs repeatedly failed to elect the head of state. This happened twice in 2009 and 2010.

In March 2016, the Constitutional Court reinstated the pre-2000 provisions of the Constitution that established that the President be elected by the people. Whatever the legal merits of the arguments in the Court’s decision, it was, in principle, supported by the Government, the Parliament, the President and the extra-parliamentary opposition alike, as well as in line with the demands of anti-governmental protests that the people directly elect the president. The findings of that decision are relevant to foresee the legal fate of the President’s proposals.

The Constitutional Court invalidated the 2000 constitutional amendments on the election of the president on both procedural and substantive grounds. First, the Court quoted a breach in the procedure of the adoption of the amendments - the fact that while given a green light by the Court in the first reading, the Court did not validate the bill amended for the second reading. Substantially, the Court argued that those subsequent amendments made in 2000 resulted in the blocking of democratic processes and institutions - repeated failure to elect the President by a qualified 3/5 parliamentary majority triggered the dissolution of the Parliament, potentially leading to an infinite number of parliament dissolutions. The Court therefore sought to “eliminate those mechanisms which generate imbalance of the constitutional institutions, thus safeguarding the coherence of the Constitution”.

One of the pledges made by Igor Dodon in his presidential campaign was to act to dissolve the Parliament. President Dodon’s proposal should therefore be seen in light of a desire to resolve a perceived conflict of the two branches in his favor, in line with his electoral promises.

The first new ground in the proposal (After consulting the parliamentary factions), practically gives the President free hand at dissolving the Parliament when he so wishes. While it is true, as Dodon argued, that the French Constitution similarly empowers the President to dissolve the lower house, Moldova has a unicameral Parliament and is not a presidential republic - while the Constitutional Court decision reversed the amendment to the Constitution which introduced Presidential election by MPs, it left untouched the provisions on the limited powers of the President; so technically the country is still a parliamentary republic with a directly-elected president.  These factors clearly distinguish the Moldova constitution from the French context and for many Moldovans, the history of constitutional crises in Moldova advises against such bold solutions.

Even if “consultations with parliamentary factions” is only a procedural requirement (which in the current reading it is not), the Parliament is expected to be dissolved each time it does not act on a consultative referendum. Besides making the notion of consultative meaningless, this proposal goes against the sovereignty of the Parliament as representative of the people in a constitutional parliamentary democracy. It also opens a Pandora’s box of populist politics, where the President, to dismiss the Parliament, only has to raise a popular issue in a referendum and expect the Parliament to abstain from implementing the outcome.

Thus, if adopted, the Constitutional amendment would significantly expand the cases in which the dissolution of the Parliament can be triggered, substantially increasing the President’s powers to do so. These changes, characterized by critics as unprecedented, bold, ambiguous and generally inconsistent with the Constitution, will clearly lead to an imbalance between the branches of government.

In the context of the constitutional history of Moldova, the prospects of Dodon’s proposal are clear. Even if the referendum on the issues is successful, the amendment could be blocked by the Constitutional Court because they have the potential to block the functioning of the democratic institutions in Moldova, triggering constitutional crises - the same arguments that led to the reversal of the 2000 amendment on the election of the President. Moreover, since the Court must validate questions submitted to referendums, it is doubtful that Dodon’s proposal will even go that far.

Dodon’s justification for the proposed reform is the loss of legitimacy of the current Parliament, whose popular trust has decreased significantly in the last years, with serious corruption scandals, migration of MPs from one faction to another and the formation of an unnatural Government majority suspected by the opposition to have been obtained through blackmail and bribes.

On its face, the current political context in Moldova is determined by a conflict between a pro-western Government backed by a piecemeal-assembled parliamentary majority on the one hand, and a pro-Russian President, former head of the largest Parliamentary faction (in opposition), on the other. In reality, this contrast is blurred when one considers the different instances in which the DPM and Dodon, despite their geopolitical differences, helped each other in the recent past, including their very peculiar interaction in the presidential campaign, with some voices claiming collusion between Dodon and the ruling party. In the campaign, DPM pledged to support Maia Sandu, the pro-European candidate, Igor Dodon’s opponent. However, the media group controlled by DPM’s chairman was vehemently spreading disinformation and denigrating materials about Sandu, while keeping its hands off her opponent.

It is therefore conceivable that the confrontation between the President and the ruling party is a distraction from other issues and that the proposals for amending the Constitution were made as a public relations move, rather than as a serious step towards reform. In parallel to the President’s constitutional proposals, the DPM initiated a bill on reforming the electoral set-up from a proportional party-list system to one based on single-member constituencies. A mixed system combining the two models is also being discussed as an “alternative” and has received support from the President, despite PSRM’s initial pledge to oppose the reforms. Attacked by critics as a reform that only favors DPM and its unconventional practices of winning over MPs, the bill is currently being promoted through an intensive media campaign of the ruling party. In this context, by positioning itself as the pro-European bastion against the pro-Russian power-thirsty President, the ruling party may seek to win over European and domestic sympathies and support for its “reforms”.

In other words, from the current developments, it appears that Dodon’s role in the the DPM’s agenda is to act as a scarecrow. He acts as a greater danger to the constitutional order, which is expected to drive support to DPMs agenda ”in order to stop Dodon”. The electoral reform is likely to favour both parties - PSRM and DPM. So it is conceivable that the two parties want to take over the next Parliament, excluding other players. It is likely that for this they will reach a “compromise” for a mixed election system (50% on party lists, and 50% based on single-constituency majority system).

If adopted, President Dodon’s draft amendment will disrupt the constitutional balance of powers between the branches of Government guaranteed by the Constitution and potentially create constant political crises. This is why it will most probably be rejected by the Constitutional Court, which has used the argument in the past in its ex post review of the 2000 amendments. At the same time, in the current political situation, the boldness of the amendments, their inconsistency and contradiction is indication enough that it is primarily a populist move, to improve the President’s image as a promise keeper, but also, possibly, to further play on the perceived conflict between the head of state and the legislature.

Andrei Lutenco is a co-founder and Program Director of the Center for Policies and Reforms (CPR Moldova), whose mission is to provide high-quality policy advice and expertise on the implementation of meaningful evidence-based reform in Moldova in the economic and justice areas, as well as to promote a proper democratic participation in reform processes.