The political crisis in Tunisia: Is it a consequence of the semi-presidential arrangement? 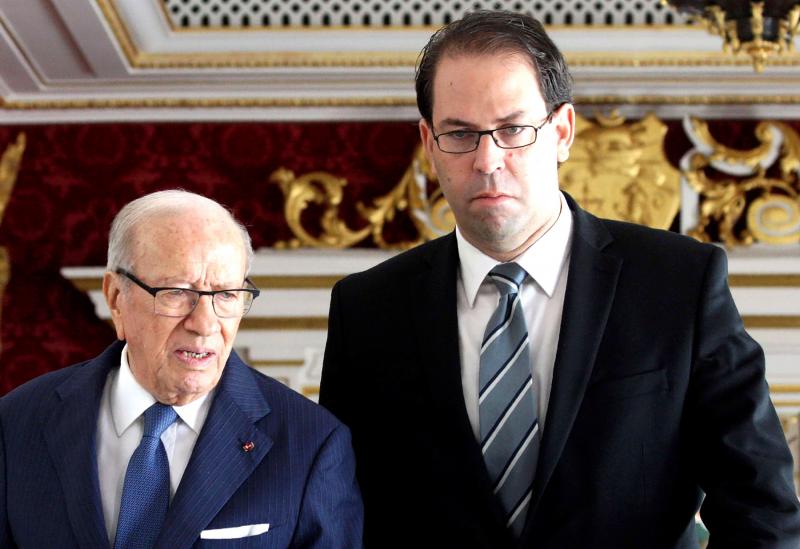 The political confrontation between the president and prime minister of Tunisia has raised questions regarding the potential instability of the semi-presidential system of government. Nevertheless, the main cause of the problem lies in political ambition and calculations, and the weakness and fragmentation of political parties. The rationalizing of the political scene through electoral reforms, including electoral thresholds to enter parliament, would enhance government effectiveness – writes Nidhal Mekki.

Although Tunisia successfully completed its democratic transition following the Arab Spring, with the adoption of the 2014 Constitution and holding of competitive elections, political tension, crises and institutional blockages have not disappeared. In fact, they have intensified as the 2019 general elections approach. This is well illustrated in the serious crisis that has stalled the Tunisian government for months and resulted in the cabinet reshuffle in November 2018. Beyond accusations of incompetence on the part of Prime Minister Youssef Chahed and personal reasons of the President Béji Caid Essebssi and his son, who is the leader of the ruling Nidaa Tounes party, the semi-presidential system in the constitutional arrangement has also been blamed. But is it really the constitution’s fault?

The answer to this question requires a brief reference to the origins of the country's political and institutional crisis. The results of the 2014 elections forced two ideologically opposed parties – Nidaa Touness and Ennahdha parties - to cohabit in order to govern. Due to the semi-presidential system of government, the prime minister must not only bargain with the other party in government but also with a president with notable powers. Moreover, the president has sought to extend his prerogatives beyond the bounds of the constitution. When the president felt that Habib Essid, Chahed’s predecessor, was asserting his authority, he simply pushed him out. The president then appealed to Chahed, believing that he would be more docile towards his ‘spiritual father’. However, Chahed has forcefully asserted his constitutional authority and has managed to combat the influence of the president’s ambitious son who has sought to topple his government.

This internal power struggle within Nidaa Touness affects the Ennahdha party. Ennahdha understands what the crisis entails as failure of the government will affect its public reputation. Ennahdha has therefore opted for government stability, and therefore supports Chahed. Political calculations in the lead up to the 2019 general elections have meant that Ennahdha on the one hand and the president and his son on the other hand have not been on the same side of the political debacle. Moreover, Ennahdha has everything to gain by adopting the posture of a responsible party that privileges the stability and effectiveness of government action to partisan interests.

Constitutional and political roots of the crisis

Under the 2014 Constitution, the prime minister, not the president, is the linchpin of the political regime.

On a political level, the months long crisis has various origins. The first is that as soon as the president ascended to power in 2014, the war of his succession broke out. Those who could not establish themselves as natural successors within the Nidaa Touness party abandoned the ship, hence, dealing a blow to the party. Secondly, the rise within the Nidaa Touness party of the president's son brought back bad memories of ‘dynastic succession’ in the Arab region, which symbolizes the state’s authoritarianism and heritage of power. The political ambitions of the president's son were clear but his political skills were not, which in turn added to the political class's aversion against him and became the main basis for accusations of subordinating the state interest to family interest by the president.

For months on end, Chahed has been under heavy pressure intended to dislodge him from power, arising from both the president and his son, as well as from some opposition parties and the Tunisian General Labor Union (UGTT), even if the motives were not the same. He was, however, able to maintain his post with the support of the Ennahda party and some dissident Nidaa deputies. In a context of government economic inefficiency, Chahed's opponents demanded his resignation and a change of government. But armed with strong parliamentary support, Chahed stood his ground while recognizing the need for a cabinet reshuffle. After long weeks of negotiations, the cabinet reshuffle was carried out in November 2018 and it is here that legal and constitutional issues were raised as to the principle of reshuffling and the procedure to be followed to accomplish it.

While the prime minister did not act in contravention of the constitution in reshuffling the cabinet, the modification of some executive portfolios needed the approval of cabinet.

Chahed nevertheless failed to respect the constitutional text regarding the modification of government portfolios. Despite a constitutional requirement to consult the cabinet before approving modification of government departments, the changes were not deliberated upon and approved in the council of ministers. The problem is that the constitution does not provide any sanctions for the violation of this procedural requirement. The Provisional Body in charge of constitutional adjudication, pending the establishment of the Constitutional Court, has limited mandate to review draft laws, but not to resolve inter-institutional disputes. The head of the government has subsequently sought to comply with the procedure by submitting his reshuffle to the following council of ministers. The initial procedural misstep does not appear to be a mere oversight on the part of the prime minster. Instead, it could have been intended to avoid a possibility where the president could have sought to attend and preside meetings of the council of ministers, as anticipated in the constitution, which could possibly have derailed the reshuffle, considering the president’s potential influence on some of the members of the council.

The political crisis has affirmed the constitutional balance in favour of the office of the prime minister.

The government reshuffle has had very important political consequences. Beyond the change of some ministers, it highlighted the new political balance in the country. The divisions within the Nidaa party could lead to the likely appearance of a new party around the prime minister, and a historical rapprochement between Ennahdha and Machrouu Touness, a breakaway party of Nidda Touness, something deemed inconceivable just two months ago.

Beyond the political implications of the crisis, the events following the reshuffle have crystallized the weak points of the Tunisian Constitution while paradoxically revealing its possibilities. The resistance of Chahed to the presidential desire to force him to resign shows that in the Tunisian political regime, as organized by the 2014 Constitution, the president cannot do everything. Instead, it is the prime minister who is the heart and center of gravity of the executive power and even of all the political regime as long as s/he is supported by a legislative majority. This demonstrates the tilt toward the parliamentary features of the constitution. While the constitutional recognition of a dual executive may enhance the possibilities of conflict, the fundamental source of the political crisis lies not in the constitution, but rather in the ambition and character of the president and his conception of power and role in the state.

The outcome of the episode of the cabinet reshuffle has come to destroy an ancient myth in Tunisia: that of a ‘Jupiterian’ president who would govern the country like a half God. This demystification is quite important for the process of political and democratic maturation in the country, especially since many citizens, politicians and jurists have remained, until this very day, nostalgic about the image of the strong president and have repeatedly called for constitutional revision, without worrying about the potential abuses that this can engender for a young democracy like Tunisia. The reshuffle and the turmoil surrounding it were also an opportunity for a good part of Tunisian politicians with presidential ambitions to understand the constitutional balance of power under the current framework.

Five years after the adoption of the constitution, the members of the Constitutional Court are yet to be appointed, depriving the institutions of the opportunity to resolve their disputes authoritatively.

Admittedly, the constitution is not perfect, but it should not be considered as the sole or primary reason for the ongoing institutional and political crisis. As in all cases, the possibility of disputes and conflicts of competence between the different institutions cannot be eliminated, even with a transition to a purely parliamentary or purely presidential system of government. The best the Tunisian Constitution can achieve is establish appropriate procedures to prevent and resolve such disputes as they arise. Indeed, the constitution provides for a Constitutional Court with the exclusive and final authority to settle such disputes. Unfortunately, five years after the adoption of the constitution, the members of the Court are yet to be appointed because of political calculations. The establishment and operationalization of the Court would enhance the prevention and timely resolution of constitutional disputes.

In reality, the real challenge undermining the Tunisian political scene stems from the weakness of political parties and their near disintegration. Accordingly, what urgently needs to be changed is the electoral law in order to ensure strong parliamentary majorities to enhance the effectiveness of government action, without necessarily excluding small parties from representation. This is why the proposed threshold of 5% for party representation, voted on in a committee at the Tunisian parliament, and which needs to be confirmed in the plenary, is a rate that runs counter to this imperative of representation. Had such a threshold existed, a number of parties in the current parliament would have been excluded, undermining parliamentary representativeness.

The establishment of a reasonable electoral threshold could contribute to the coalescing of parties, but could also undermine parliamentary representativeness.

It is true that Tunisia is no longer in a constituent phase that required the representation of the maximum of political sensitivities and that today consideration to parliamentary efficiency and government stability is necessary. Nevertheless, 5% threshold is too high considering the crowded Tunisian political scene and the risk of a monopoly of the representation by one or two parties only. It has been suggested that a threshold of 3% would be more appropriate and can reconcile the need for a rationalized multiparty system and the imperative of representation. Providing a threshold to enter parliament need not mean signing the death warrant of smaller parties. On the contrary, this could incentivize them to come together, thereby avoiding the dispersal of voices and programs. If freedoms of association, expression and freedom of the press are guaranteed and respected, no party, no matter how microscopic, should have any concerns. It can exist, work and fulfill the functions of any political party. Political life, it must be remembered, should not be reduced to the spectacle offered within the walls of parliament.

Nidhal Mekki is a researcher in law at the Faculty of Juridical, Political and Social Sciences of Tunis (FSJPST).  He was legal advisor at the Tunisian National Constituent Assembly.