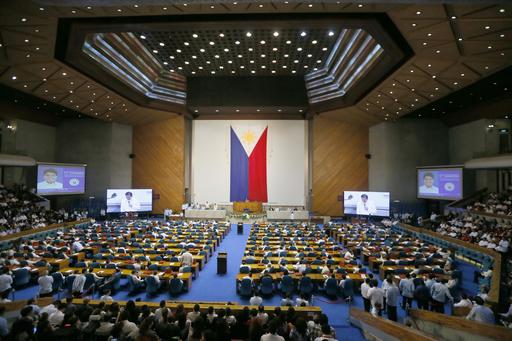 Philippine Congress during President Rodrigo Duterte state of the nation address (photo credit: AP)
<p>THE National Security Council&nbsp;<span>on Wednesday&nbsp;</span>night agreed to set in motion efforts to overhaul the 1987 Constitution through the two Houses of Congress convened as a Constituent Assembly (Con-Ass), Speaker Pantaleon Alvarez said.</p><p>Speaking before the Management Association of the Philippines, Alvarez said President Rodrigo Duterte had agreed to abandon his earlier proposal to overhaul the nearly three-decade-old charter through a Constitutional Convention (Con-Con) to save time and money.</p><p>It would be easier to amend the charter through a Con-Ass because the amendments will be tackled by lawmakers, instead of waiting for the election of Con-Con delegates, he said.</p><p>Holding a Con-Con will cost the government P6 billion to P7 billion, Alvarez said.</p>
Read the full article here: The Manila Times