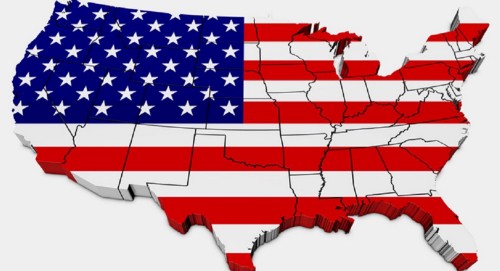 United States of America (photo credit: medium.com)
State constitutions are far easier to amend than the federal constitution — and on Election Day, voters in several states passed amendments that added new rights to their state constitutions. Such changes can be significant because while state constitutions cannot infringe on rights provided by the U.S. Constitution, they can protect additional rights. In every state, the state legislature can propose constitutional amendments (and in everywhere but Delaware amendments must also go before the voters). In 18 states, voters can also place a constitutional amendment directly on the ballot without legislative involvement if they collect a certain number of signatures. The average number of amendments for a state constitution is 115, far more than the U.S. Constitution’s 27 amendments. Here are some notable new state constitutional rights that voters approved this year. [...] In California, Vermont, and Michigan, voters passed ballot measures that will add rights to reproductive freedom to their state’s constitutions. [...]. Michigan voters approved a constitutional amendment that adds an explicit “fundamental right to vote” to the state constitution, enforceable by state courts, along with a number of provisions that expand voter access. [...] Nevada will become the latest state to adopt a state-level Equal Rights Amendment. It joins 27 other states with that have either comprehensive Equal Rights Amendments or other gender equality provisions in their constitutions. [...] Iowans voted to amend their state constitution to add an explicit right to bear arms, with language specifying that any laws restricting gun rights would be subject to strict scrutiny by the courts. [...] In Illinois, voters approved an amendment that grants employees the “fundamental right to organize and bargain collectively.” The amendment also prohibits the passage of any law that would interfere with this right, which proponents say would prohibit “right-to-work” laws that enable workers in a union workplace to refuse to pay union dues.
Read the full article here: Brennan Center for Justice