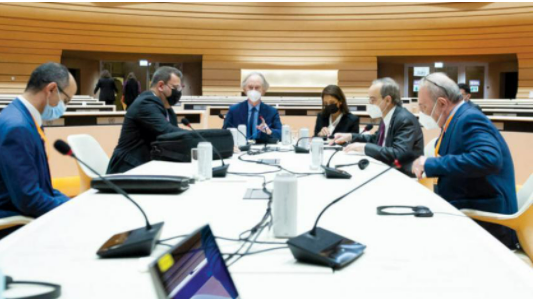 Heads of Syrian government and opposition meet in Geneva (photo credit: United Nations)
For the first time in almost two years, the two opposing sides in the Syrian conflict have co-chaired a meeting of the Syrian Constitutional Committee this week in Geneva after agreeing earlier to begin the drafting process of a new basic law for the country. After a pause of nine months, the committee, comprising representatives of the Syrian regime and members of the political opposition plus key figures of civil society, are holding the sixth round of talks under UN auspices. UN Special Envoy to Syria Geir Pedersen said the committee will discuss key principles on its first day, then begin drafting articles for a new constitution. A 45-member committee will draft the articles before delivering them to a 150-member panel for approval. Two years of separate discussions have led to nowhere with the Syrian regime representatives refusing to commit to anything on paper. But the past few months saw crucial diplomatic movements that appear to have a direct impact on the position of the Damascus regime.
Read the full article here: The Jordan Times