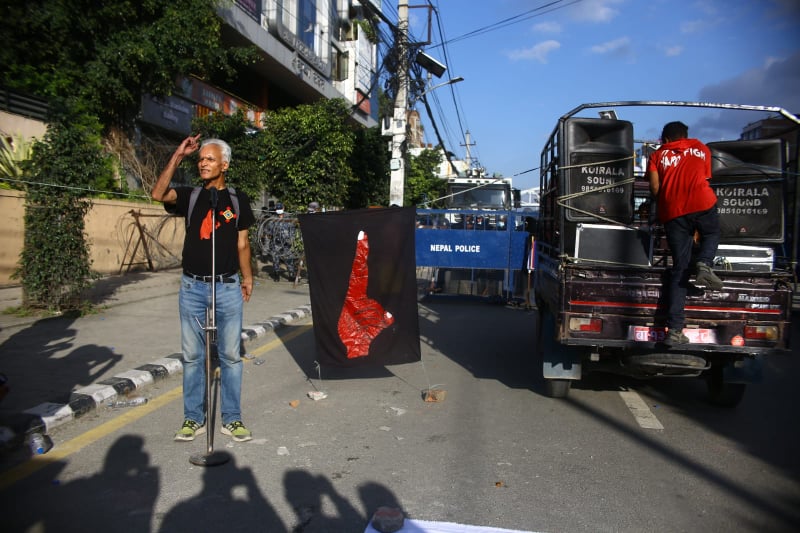 Writer and activist Narayan Wagle taking part in Brihat Nagarik Andolan protest (photo credit: Nepali Times)
While the government was celebrating the seventh Constitution Day with much fanfare at the Tundikhel parade grounds Sunday, campaigners of the citizens' movement—Brihat Nagarik Andolan—were marching at the Maitighar Mandala demanding amendment to the constitution saying that it failed to address the concerns of marginalized people and communities. [...] At the gathering, Dalit activist Dhan Kumari Sunar said the constitution is flawed and serves the interests of the people from the dominant ruling class, which has been in power for a long time. She said it was ridiculous to provide reservations in education and employment to the same group which has been ruling the country. The rally at New Baneshwar was addressed by several renowned figures including columnist CK Lal, writer Khagendra Sangraula, political analyst and civil society activist Rajendra Maharjan, former member of the National Human Rights Commission Mohna Ansari and representatives of various marginalized groups including Madhesi, Tharu, Muslims and Indigenous groups. [...] Tharu, acting coordinator of the Tharuhat Tharuwan Rastriya Morcha also questioned the Language Commission for recommending languages for official use in the provinces without consulting experts and community members. [...] According to the Andolan, Nepal’s Constitution was hastily promulgated in 2015 without addressing the major political issues raised by the people’s movement and on the day the country got its new constitution the wish of many Nepali people to institutionalise an inclusive democratic political system and a public welfare state system was trampled upon.
Read the full article here: Kathmandu Post