Making Tanzania's new constitution: heading for a miscarriage or stillbirth?? 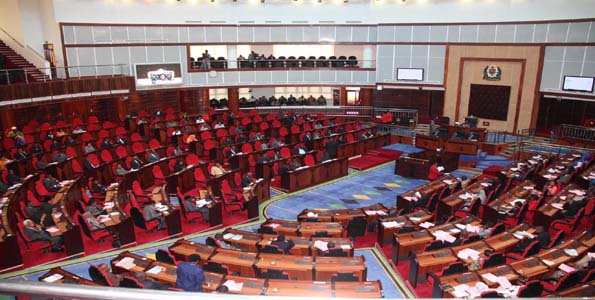 Inside the Parliament of Tanzania in Dodoma where the CA is sitting, photo credit: The Citizen

As Tanzania delves deeper in constitutional debates to birth a new constitution the fate of the United Republic of Tanzania hangs in a balance. This reality was hammered home by the leader of the Opposition in the National Parliament, Freeman Mbowe, when offering his closing remarks at the completion of committee presentations of the first two chapters of the Draft Constitution in the Assembly. Mbowe averred that the unilateral actions of the Union and Zanzibar governments have plunged Tanzania in a constitutional crisis and the ensuing impasse has put Tanzania on the verge of a political crisis.

Millions following deliberations on national television or on local radio stations possibly share the same view. In addition to the chaos that has come to characterize the daily drama in the Constituent Assembly (CA), many people wonder if the CA will complete its work; or if it will be dissolved halfway through the process because ideological differences that inform the different power blocks in the CA make it impossible to continue with its work. With about two weeks left for the CA to complete its work, it has only managed to deliberate on two chapters of the Draft Constitution and this after about two months of discussions. One reason for this is the constant squabbles—on both issues of procedure and the union structure—within the CA. This has created the sense among some that the CA has inefficiently utilized its time. Others disagree. Winifrida Korosso, the Secretary to the Law Reform Commission, argues, for instance, that in a body with diverse composition such as the CA, squabbling is vital to the process and an important part of group forming, storming norming and performing.

However, by the way deliberations are unfolding at the CA there is little to suggest that the political will to sail the constitutional process through exists. Partisan agendas cloud all discussions such that the choice of whether Tanzania should be a federation or maintain the current union structure (with Zanzibar keeping its semi-autonomous status) has become the central agenda of the CA. Furthermore, CA business is being determined by numbers and not the substance of the argument—an approach which many, such as CA member and Chair of National Convention for Construction and Reform (NCCR) - Mageuzi James Mbatia disapprove of.

It is, therefore, not surprising that one of the major issues of contention in the CA at the stage of drawing up rules of procedure to govern official business in the Assembly was that of the format of passing provisions of the Proposed Constitution. The law provides for voting where a two third majority is required by members from either side of the union (Mainland and Zanzibar) for any provision to sail through, be amended or be struck out by the CA.

But as matters stand, it is hard for any of the power blocks in the CA to get the two thirds required from  either side of the union, for their agenda to pass through though Zanzibar appears to be in a better position to sway the vote. Granted that the ruling party dominates the CA but they do not have absolute majority in the committees required to make changes to the Draft Constitution. Moreover, it is acknowledged that even within the ruling party there are deep divisions about a number of key issues such as the appropriate union structure. For this reason, how members of the CA vote became a major point of contention during the first quarter of the deliberations in the CA.

Uncharacteristically, the ruling party, Chama cha Mapinduzi (CCM), touted for an open vote while the Opposition wanted a secret ballot system. The open vote would allow the ruling party to reign in its stray elements ensuring that they vote according to the dicta of the party while the Opposition wanted the secret ballot to give, not just CCM members, but also the 201 appointed members the freedom to vote as their conscious and not their party dictated.

Mohammed Khatib Mnyaa, a parliamentarian from Civil United Front (CUF) and one of the most vocal members of the CA has expressed his unhappiness with how the process is unfolding especially as regards the fate of the 201 members appointed by the President. “There is a lot of pressure on them and they find themselves in an environment pregnant with ushawishi (pressure) and vitisho (threats)”, he laments.

Tundu Lissu, the Chief Whip in Parliament and member of the CA, has decried, on various occasions, the overt and subtle threats directed at party members as well as vote swingers. In his opinion, such threats run counter to the spirit of ensuring open and free dialogues in the CA. Ironically, even on the Assembly floor and despite the formation of various committees to resolve the question of the vote, the issue was settled by the CA voting to adopt a mixed system of open and secret ballot, a compromise that is in itself a testament of the rifts among members.

Grievances over allowances paid to members have also seen some members of the CA threatening to pack up and leave Dodoma, where the CA is convening, if these are not increased. Initially, CA members wanted to be paid the same rate as parliamentarians; or the rate supposedly paid to members of the recently dissolved Constitution Review Commission, on the argument that they too were presidential appointees and therefore entitled to a similar rate. These demands have not gone down well with a public, a large segment of which is recovering from devastating rains that have destroyed infrastructure, homes and crops. CA members have been defiant, arguing that the cost of living in Dodoma has skyrocketed such that the daily rate of circa USD175 they receive is no longer sufficient to cover their basic expenses. As high profile appointees, they argue that they deserve to be highly compensated.

Other disturbing practices within the CA relate to what look like attempts by certain individuals to censor free speech on the CA floor. This has been done in two principal ways. One is by rationing the time allocated to certain speakers on the floor. This happened to the Chair of the Constitution Review Commission when he sought to expound on the Draft Constitution submitted by the Commission to the body. The other is the limited media coverage of the proceedings. Initially, certain elements in the CA did not want the media to cover and expose the charade being displayed by individuals in the Assembly. Yet, despite reaching  a deal to allow  that, taking people off air when the national broadcaster finds their views incompatible with the official standpoint still happens sometimes.

UKAWA, the coalition formed to protect the draft Constitution from sabotage by political parties and interest groups has been vigilant, their might and acumen became apparent in their handling of these two issues, forcing a CA dominated and led by the ruling party to reconsider its strategy.

On the forms and impact of tensions besetting the CA presently, Dr. Kitila Mkumbo, Senior Lecturer at the University of Dar es Salaam, argues, “Two governments is a CCM agenda. We cannot impose a party agenda on a national exercise”. He warns that the high handed manner with which the ruling party is directing the process may cause the country to descend into chaos if common ground is not found. In fact, his prediction seems to have come true with the ongoing boycott of the CA by some members of the Opposition, triggered by what they consider as use of hate speech in deliberations and the condescending conduct of their colleagues in the ruling party.

It is trite learning that constitution review processes are never simple or harmonious undertakings. Yet, for a review process taking place in a relatively peaceful context, albeit one with with a strong ruling party in place, one would expect a smoother, even if not completely rosy process. In a context where negotiation has become more about reluctant ruling elites being forced to come to terms with their diminished influence rather than consensus building, and with no clear indication of when a disgruntled boycotting oppositions will return to the floor, the risk of failure. The Opposition has warned of taking its case directly to the people, increasing the potential for social unrest. It is therefore ever more imperative that all the parties, particularly the government, take concrete steps to salvage the situation and defuse the tensions in the assembly. Whether this will happen, however, remains an open question.