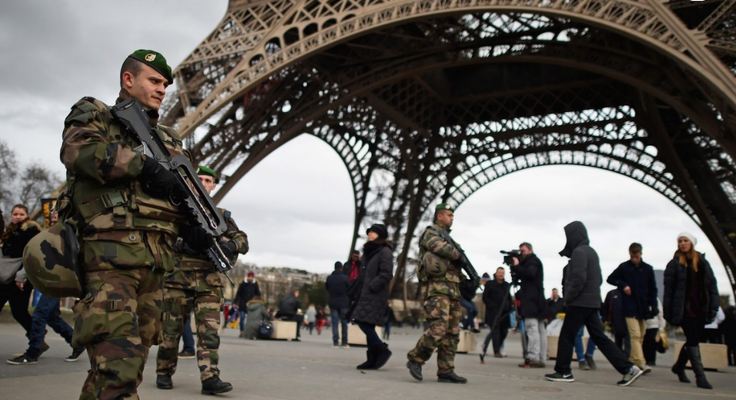 French troops at the Eiffel Tower, Jan. 12, 2015, in Paris. France is set to deploy 10,000 troops to boost security after last week's deadly attacks and is mobilizing thousands of police to patrol Jewish schools and synagogues. Jeff J Mitchell/Getty Images

“Security and liberty”: it is the name of one of the most important decisions issued, in 1981, by the French Constitutional Council.[1] Since this decision, the terms of the debate have remained the same – for politicians as well as judges. That is how to ensure a balance between protecting national security and respect for fundamental freedoms.

This issue is especially pertinent at times of threats from terrorism, as we can see in France after the attack on the satirical newspaper Charlie Hebdo on 7th January 2015. Experience shows that counter-terrorism legislation is usually adopted after a terrorist attack, when authorities are pressed by the citizens to take all necessary measures to guarantee public safety. This is becoming a global issue, as contributions this month in this series from Pakistan, Kenya and the United Kingdom show.

France’s  most recent counter-terrorism law, passed on November 13th 2014, is a case in point. A draft bill was proposed in July, two months after the killing of four people at the Brussels Jewish museum by Mehdi Nemmouche, a French citizen, after he returned from Syria where he was fighting with Isis. The aim was to forestall attacks in France (or in the rest of Europe) by French-born militants returning from jihadist movements in Syria and Iraq.

First, it creates an administrative ban on leaving the territory (art. 1, introducing in the criminal code a new art. L. 224-1) with the aim of preventing radicalisation and training of individuals abroad, who might return to carry out terrorist activities in France.

According to this provision every French citizen may be subject to a ban on foreign travel when there exists serious reasons to think that (s)he intends: (1) to travel abroad in order to participate in terrorist activities (as defined by article 421-1 and following of the criminal code); or (2) to travel abroad to a country where terrorist groups are active, in conditions that could lead him to threaten public security upon his return. The decision is taken by the Interior Minister, through a written, reasoned decision, without involvement of the courts. The measure is ordered for a maximum of six months and can be renewed several times to a maximum period of two years, and the decision can be appealed to the administrative courts.  The person subject to this measure has 24 hours to give his or her passport and identity card to the authorities.  Failure to do so, or leaving or attempting to leave the French territory under such a ban is punishable by three years of imprisonment together with a fine of  € 45,000.

Before the law was passed on 13th November, only a judge had the power to establish a prohibition from leaving the country. Under the new provision, the executive has the same power to limit the movements of a person if he or she is suspected of planning to join a radical group abroad. The new provision thus penalises suspected intentions rather than any concrete actions, and without prior intervention of a judge.

Secondly, the law criminalises the activity of “individual terrorist enterprise” (art. 6, introducing in the criminal code a new article 421-2-6), targeting the increasing trend of individuals carrying out terrorist attacks, or seeking to do so, without formal links to any terrorist organization.

According to this new article, preparing the commission of a terrorist action constitutes a terrorist action itself if it involves an individual terrorist enterprise aiming at seriously disturbing public order by intimidation or terror - and that is characterised by: (1) possession, pursuit, procurement or manufacture of objects or substances liable to create a danger to others; and (2) one of the following material facts: (a) collecting information on places or persons that permit to lead an action on these places or to attempt to this persons or conduct a surveillance on these places or persons; (b) training in weapons or in any kind of fighting, in the fabrication or use of explosive, inflammatory, nuclear, radiological, biological or chemical substances or training to pilot vessels or aircrafts; (c) consulting websites or holding documents explicitly encouraging terrorism or being apologetic towards acts of terrorism; (d) having been abroad in a place that was the location of terrorist group operations.

The commission of this infraction exposes its perpetrator to a jail sentence of 10 years and a fine of € 150,000. Thus, the law allows the arrest of individuals at the stage of preparatory actions – aiming to prevent rather than punish actions - and under a broadly worded provision.

Thirdly, the law allows the blocking of any site inciting or apologising for terrorism (art. 12, introducing a new article 6-1 in the law n° 2004-575 of June 21st 2004 – Law for Trust in the Digital Economy). This was especially adopted to close internet sites that preach jihad to young people. According to this provision the administrative authority can require a website to remove any illegal content, and can oblige the webhost, internet service provider and search engines to remove the site, or to remove references to the site.

This is the first law allowing the authorities to oblige IPS and website hosts to remove offending content and giving them the power to block websites. The only previous case was related to online gaming sites and was placed under the supervision of a judge. The new provision allows a limitation to freedom of speech without judiciary control.

These provisions have been adopted by a broad majority of the Parliament and with the implicit support – or the indifference – of the public opinion. However, some journalists, organisations or institutions have expressed concerns regarding the limitation of liberties that it provides (e.g. Human Rights Watch, Consultative Commission of Human Rights, the Magistrates Syndicates[2]). Can these concerns be translated into constitutional arguments?

The first provision, which allows authorities to confiscate passports, does not seem incompatible with the Constitution. Indeed, because of its preventive goal, it has to respect constitutional rules that relate not to criminal law but to administrative policing.

In this matter, the Constitutional Council requires that the limitation of a constitutional right be justified and proportionate to the legitimate goal it pursues.

Regarding the article L. 224-1 of the criminal code, the condition of necessity is satisfied. The power given to the Interior Ministry tends to protect public order, which is considered, in the jurisprudence, as a legitimate constitutional objective. On the other hand, the restriction of the freedom of movement seems proportionate to this goal. The law establishes substantive guarantees: limitation to six months of each interdiction, limitation to two years in total. It also provides procedural guarantees: obligation to indicate the reason for this measure (so that the person can contest it with all the necessary information), obligation to hear the person (or his or her lawyer) on this measure, obligation to lift the interdiction when it ceases to be justified, right to contest this measure before an administrative judge, in an ordinary procedure in which the judge decides within 4 months, (or quicker in an emergency procedure), and the possibility for the judge to cancel or suspend the measure if it is not justified (the judge has the power to require from the authority the communication of the elements on which the decision is based – even if they are covered by the secret defence authorities). Moreover, it is likely the court would find that no other measure, less restrictive to the freedom of movement, could allow the intended goal to be achieved.

The constitutionality of the second provision, which criminalises the activity of “individual terrorist enterprise”, is more questionable. It uses vague or broad terms to define its scope of application (for example: “an object liable to create a danger” can apply to any object). Consequently, the provision could be questioned regarding the constitutional requirement of precision of criminal laws.  The principle of presumption of innocence could also be at stake, because the offence can be constituted before any action (for example if a person, supposing his or her criminal intention established, has been consulted websites from Isis because they are curious about this group they read about in the news, who to try to make up their own mind about the demands being made by this groups, who has recently purchased a rifle because they like shooting birds and goes to a shooting range to practice).

The third provision raises some constitutional issues too. Firstly, there is no judge in the procedure, only an independent administrative authority. And this authority is appealed to play a role after the measure has been ordered (it can file a lawsuit before the administrative judge if the blocking of the site seems illegal or unjustified, so as to obtain an emergency unblocking). Secondly, the provision, by the expression “provocation” to terrorism, lacks clarity. At which point is a provocation constituted? Should the expression of a criticism or anger be considered as a provocation? There is, on this point, a large margin of appreciation conferred to the police and judicial authorities who have to apply the law. Thirdly, the proportionality of the measure could be disputed, as it can block an entire website if the content has not been removed spontaneously, even if other contents of the website are lawful.

The above concerns show that some serious constitutional issues are at stake. However, the Constitutional Council generally practices self-restraint when reviewing the constitutionality of laws that purport to fight against terrorism. This will be especially the case with these provisions. The general feeling is that, if they had been adopted earlier, the massacre at Charlie – as well as the Belgium Museum – could have (maybe) been avoided.

After the Charlie Hebdo attack, the Prime Minister has asserted the necessity of taking new measures to fight against terrorism, without giving any indications of the content of new legislation. If new laws are passed, they will be undoubtedly be constitutionally challenged alongside those adopted in 2014. For the politicians and the judges the balance between security and fundamental freedoms is once again at stake.

To what extent will the courts maintain their usual willingness to limit constitutional rights for the purposes of fighting terrorism? There is a breaking point, beyond which the limitation of these rights becomes a sacrifice of them.

Three criteria can be taken into account to determine this breaking point: firstly, the efficiency of the measures (a limitation of rights is not justified if it cannot achieve the intended goal); secondly, the equal application of the criminal law (it is an imperative requirement to apply it in a rational and not selective manner and, especially, not to target a precise community); and thirdly, the limited scope of counter-terrorism legislation (it should apply only to the special category of person they are enacted for and not become a pretext to establish a generalised surveillance of the population).

How these lines will be drawn we will have to wait and see, but if we hold our republican principles dear one thing is certain: there should be a public and transparent debate on exactly where, why and how we should strike that balance between national security and the constitutional freedoms we wish to protect.

[1] The constitutional judge cancelled, on the basis of the rights to due process, several provisions of a law that extended the powers of the police and public prosecutor regarding identity control and flagrant offence.

[2] Nevertheless, it must be noted that these concerns were expressed about the initial version of the text and that some of them have been taken into account by the Government and the Parliament during its discussion.