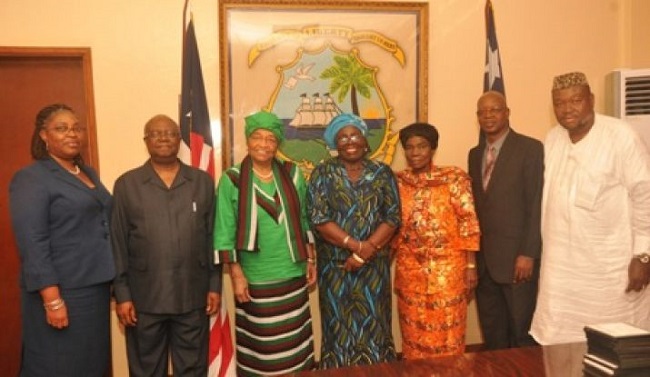 Liberian President Sirleaf with members of the Constitutional Review Committee [photo credit: Buzz Liberia]
<p>Liberia’s&nbsp;Constitution Review Committee (CRC) on Monday&nbsp;presented its final report on the National Constitution Conference (NCC). Presented to President Ellen Johnson Sirleaf, the report also contains&nbsp;recommendations to amend the West African country’s constitution as well as several CDs of the 1986 Liberian Constitution in the 16 local vernaculars.</p><p><span style="line-height: 20.3999996185303px;">Speaking during a formal presentation ceremony at the president’s temporary Foreign Ministry office, the chairperson of the CRC, Cllr. Gloria Musu Scott, on behalf of her colleagues, thanked President Sirleaf&nbsp; for the confidence reposed in them to perform this task and for the opportunity provided them to form part of such an historic national project.</span></p>
Read the full article here: Buzz Liberia