The law on local and regional elections: a step towards local democracy in Tunisia 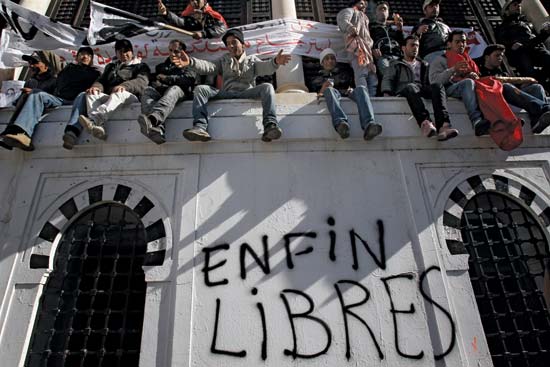 Demonstrators in the capital city of Tunis during the Jasmine revolution sitting on a wall (Photo credit: Christophe Ena/AP)

The Tunisian revolution was to a large extent a revolution of the country's interior regions that have long been marginalized and excluded from the process of development and distribution of wealth. Since the Tunisian uprising, unemployed youth and civil society from those disadvantaged areas have been continuously challenging the country’s economic policy which exploited the natural resources of the interior regions to the benefit of large urban areas, especially those along the coast. This policy stemmed from the fact that political and economic decisions were made at the central level (the capital), without taking into account the reality of the interior regions, their problems and their needs. The Tunisian revolution was therefore predominantly a response to the concentration of political decision and wealth. The new political regime, resulting from the Constitution of January 27th, 2014 shouldbreak with centralization and move towards decentralization which will allow the establishment of grassroots democracy and equitable development between the country’s different regions.

But the choice that has been made since the early days of the revolution- to organize the national legislative and presidential elections first, has left the municipalities and the regions in a state close to anarchy. The municipal councils were dissolved and since the revolution they have been replaced by special delegations whose members were not elected but appointed by the government, and who suffered from blockages because of political dissensions within them and lack of legitimacy. The result is that they have become mostly ineffective, resulting in enormous difficulties at the level of communal services and generally in major social tensions.

The Constitution emphasizes the role of decentralization and local democracy (article 14). It devotes a whole chapter to "Local Power". This was one of the main demands of the Tunisian revolution, that the regions should manage their affairs freely within the framework provided for and regulated by the country’s constitution. Instead of jeopardising democracy or the unity of the State, decentralization strengthens and consolidates them because local democracy is the first level of democracy and such accommodation of diversity is not contradictory to the preservation of unity.

The process of passing the Law on Local Elections has been long and arduous. It must first be said that this Law modifies and completes provisions of the Law of May 16th, 2014 on Elections and Referenda and does not come as a separate act. This choice is rooted in the legislature’s will to have one single electoral code that will ensure the law’s visibility and coherence with the state legislative framework.

Filed in early 2016, the bill amending and supplementing the Law of May 16th, 2014 could be adopted only at the beginning of 2017. One of the main reasons for the delay in passing the law, but not generally remarked upon, is that no political party, including the two major parties (Ennahdha and Nidaa), was ready for the municipal elections in 2016 or even in early 2017: the Nidaa party because of serious internal crisis and the Ennahdha party because of the degradation of its image following its coming to power during the time of the NCA which was marked by trial and error, and inefficiency. Both parties, as well as all the others, had a serious problem with the voters' lists, since no party was in position to prepare lists of thousands of candidates in all the constituencies in accordance with the conditions stipulated in the Electoral Law (gender parity, youth quota and inclusion of persons with disabilities).

Since no party had an interest in having the law passed quickly, the debates on legal issues and political choices lasted over several months, which in reality suited all the parties, even those insisting publicly on rapid organization of municipal elections.

The first point of contention was the threshold for a party to participate in the distribution of seats within a constituency. The big parties wanted a threshold of 3%, whereas the small parties were in favor of a threshold of 2%. Small parties wanted to preserve their chances of being represented even if they did not get a large number of votes. The big parties, conscious of the importance of local elections in their establishment in the country, their political future and preparation of the forthcoming elections, wanted to have the maximum number of seats in order to control the municipal and regional councils.

But the issue which caused most controversy was the participation of members of armed forces and of internal security forces in local and regional elections. Parties that generally opposed their participation in elections (whether local or regional, legislative or presidential) argued that these two bodies should remain in a neutral position without being involved in the political game. They also feared that the long period of dictatorship which Tunisia experienced would lead the military and security agents to vote for the ruling party in line with a submission to the executive power embedded in their culture. This fear was not entirely unfounded since for a long time the security agents (rather than the military) have considered themselves more in the service of a regime and a person (the Head of State) than in the service of the state and of citizens. The Ennahdha party has subsequently changed its position by accepting that the military and internal security agents should be allowed to vote, but in a progressive manner to take account of the current political context of Tunisia and the dangers of bringing the army and the police into the political unrest. Thus, they will be able to vote in local and regional elections but they can not be candidates. As for the presidential and legislative elections, the party has decided that it is too early to grant them the right to vote, but the door remains open in the future so that they can participate in the vote.

Those who called for the participation of military and internal security force officers in elections argued that they are regular citizens and that depriving them of their right to vote would be contrary to the fundamental principle of the Constitution, namely, the principle of equality of citizens in exercise of their constitutional rights.

After months of intense debate, the Ennahdha party endorsed the position recognizing the right of the military and security agents to vote in local and regional elections but not in the national ones. According to this proposal, these two groups would not qualify as candidates for elections either.

In my view, this is a wise choice because it provides for a much desired balance between allowing members of these two bodies to exercise their right to vote, and taking into account the political and historical context of Tunisia which was marked by a strong allegiance of the army and the police to the executive branch. There is no doubt that exercise of the right to vote by these two bodies will enable them to participate in the management of local affairs and involve them in democratic and civic life. It will also reinforce the republican character of the army and the police insofar as the members of these two bodies will have the opportunity to demonstrate that there is a clear distinction to be made between their status as full and respected citizens (granting them the right to vote) and their status as officers or security agents in service of the State and citizens and not in service of a particular government or party.

Despite the lengthy process of passing the Law on Local and Regional Elections, there have been significant developments. Firstly, the principle of vertical and horizontal alternation has been explicitly embodied in article 49-9 of the Law. Horizontal alternation is an extremely important development insofar as vertical alternation does not make it possible to get closer to gender parity in elected councils. Indeed, given that several parties chose men as lead candidates for their electoral lists and that only the leaders of lists or the first candidates were elected, the number of men was clearly higher than the number of women in the elected councils. With the horizontal alternation political parties will be obliged to respect the equality of sexes, not only in the same list but also between the lists that they present in different constituencies in such a way that if in Constituency A the lead candidate of a list is a man, the lead candidate in Constituency B must be a woman. Thus, the country will ensure parity in elections in line with the Tunisian Constitution (article 46: The State has striven to ensure parity between women and men in elected assemblies).

It should be noted, however, that the principle of vertical and horizontal alternation and youth participation will be more respected than that of the participation of disabled persons as the penalty for non-compliance with these requirements is the invalidation of the list, whereas in case of persons with disabilities the list will only be deprived of public funding.

It is true that the Law on Local and Regional Elections was adopted late, but it allowed different political forces, civil society as well as citizens to discuss important issues and come to reasonable agreements on issues such as involvement of security sector personnel, gender parity and the involvement of youth and persons with disabilities.

The Independent High Authority for Elections announced that the local elections will take place at the end of November 2017, if all goes as planned, and has already begun preparing. These first local and regional elections after the revolution will undoubtedly constitute a major turning point in the history of the country and will contribute to the completion of the process of democratic transition of Tunisia.

They will also mark the beginning of a new era of grassroots democracy, promote political culture among citizens and their participation in consolidation of democracy at the national level.

Nidhal Mekki is a researcher in law at the Faculty of Juridical, Political and Social Sciences of Tunis (FSJPST).  He is a former legal advisor at the Tunisian National Constituent Assembly, Nidhal also writes on human rights issues in Tunisia and in Arab countries.