Last minute add-on to Thailand’s post-coup constitution: Crisis Committee or the long arm of the military 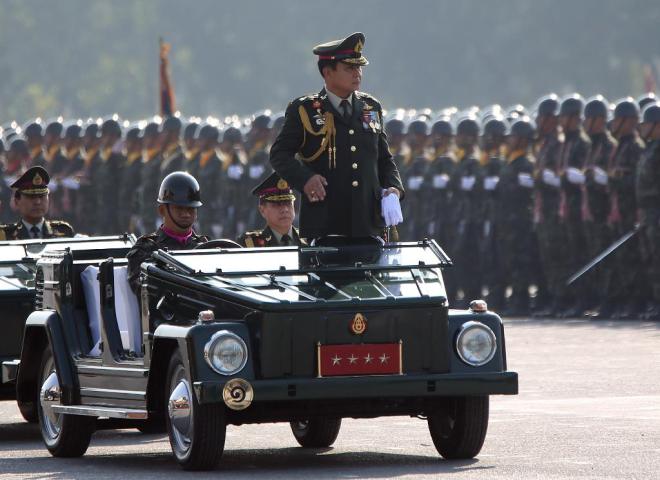 “If I were a woman I would fall in love with his excellency.”

Those flattering words were spoken by General Thanasak, until recently Foreign Minister of the Thai military government, who expressed his adoration for the Chinese Premier at an ASEAN security forum in early August. His counterpart, Chinese Foreign Minister Wang Yi, stood next to him looking somewhat embarrassed, not knowing what to say. Some would regard this open adoration as a sign of blooming relations between the two countries. After Thailand’s ties to Western countries soured since its 2014 military coup, it quickly pivoted towards China. The statement regarding the Chinese premier also underlines something else: the desire of the Thai military government to assert a more rigid and streamlined control of governance. Reading between the lines, General Thanasak’s praise for China’s “excellency” also pays regard to its form of governance in general. China’s politburo – the supreme policy-making body of the Communist party overseeing governance – has long been criticized for its level of stricture and unrepresentativeness; yet Thai constitution drafters have openly mooted the idea to implement something similar.

Following the military coup in May 2014, the generals who instigated the movement have been looking to cement their vision of a “reformed” democracy. They preach a system free from corruption, cronyism and imbalance; yet they continue to commit these very acts themselves. The junta that formally calls itself the National Council for Peace and Order (NCPO) has taken firm control over the political discourse. It has outlawed public gatherings, detained dissenting opponents, and enforced a high degree of media scrutiny and online surveillance. It also oversees nearly all branches of government. Most NCPO members are also members of the cabinet, most notably former army chief, junta leader, and Prime Minister General Prayuth Chan-ocha. The NCPO unilaterally appointed most other government bodies, including the National Legislative Assembly (NLA) acting as the ersatz-parliament, the National Reform Council (NRC), which hands out political and legislative recommendations, and the Constitution Drafting Committee (CDC).

The CDC has worked hard since the beginning of 2015 to draw up a new constitution with the hope that this will be the last one for the foreseeable future. While the draft was originally scheduled to be completed by late July, the CDC was granted a 30-day extension to clarify certain aspects of the constitution. The draft, reduced from 315 to 285 articles, was forwarded to the NRC, which will vote on its adoption in September 5. If the vote outcome is positive, the draft constitution will then be subject to a nationwide referendum in early 2016. This may or may not pave the way for elections sometime at the end of 2016 – a whole year later than what the military junta originally promised. Regardless in which form the draft will be enacted, Thailand’s twentieth constitution could deeply transform the country’s political landscape and have lasting negative consequences due to the changes severely hobbling the powers of elected officials to govern.

Certain features proposed in the constitutional draft, such as the new electoral system or the pre-vetted Senate, have previously been discussed on ConstitutionNet. Additionally, a highly controversial article was added to the draft constitution at the last minute. Article 260 provides for the establishment of the Committee for Reform Strategy and National Reconciliation that would co-exist with the elected government. The Committee would have the power to “commit or suppress any action” in the event of a crisis or conflict in the country that cannot be contained.  Committee’s non-elected membership and lack of definition on what constitutes a “chaos” or “crisis” appears to be yet another signal of how the Thai military attempts to hold onto power and limit the power of elected officials by constitutional design.

The question that no one seems to know the answer for leaves the Committee with an amorphous jurisdiction prone to abuse. Several CDC members have referred to the anti-government protests of 2013-14 in the capital Bangkok as a crisis. These protests lasted half a year, killed at least 28 people and injured about 800 in occasional violent clashes. Led by former opposition politicians, these protests have been constantly obstructionist, from prolonged street protests and occupations of government buildings to the targeted sabotaging of the snap elections of February 2, 2014, which led the Constitutional Court to annul the elections. This series of acts has practically paralyzed the government of then PM Yingluck Shinawatra and left it vulnerable to the subsequent military coup.

Proponents of the coup have said that the situation was “chaotic” and needed the intervention in the face of an “unavoidable disaster”. However, on top of the allegation that the protests were planned all along to plot the coup, it shows that a political gridlock can easily be manufactured given enough manpower and political backing. The demands by the protesters to suspend electoral democracy and to bring “reforms before elections” were echoed by the military junta throughout the constitution drafting process.

­­­Nearly all major political parties, sidelined since the coup and forced to witness how the rules are being re-written without their input, have opposed the proposed Article 260. They have accused the constitution drafters of creating a backdoor for dictatorship and calling for people to vote no in the upcoming referendum on the constitution. This has drawn the ire of General Prayuth, lashing back at the politicians and saying that they have “no right” to intervene in the “reform” process – the latest demonstration of the military junta’s open contempt of elected politicians. The junta and likeminded ultra-conservative allies, many of them former protesters, regard current politicians as a corrupt perversion of democracy, who thus need to be removed from Thai political discourse for progress to come.

Article 260 proposes to establish the Committee and specifies its composition of 23 members consisting of a chairman, the speakers of the parliament and the senate, the prime minister, the supreme commander, the chiefs of the army, navy, air force and national police, a former speaker of the parliament, a former head of the Supreme Court and a former prime minister. This membership is regardless of whether the office holders have come into their position through election or other less democratic means. The remaining 11 members are comprised of “specialists from various fields” voted in by the parliament. The Article does not specify either, who those specialists may be, or, who would select the other members such as the former prime minister and Supreme Court head to be in the committee. By the current definition, the only members that are voted into office via an election are the Prime Minister and the parliament speaker. The Article would not prevent any members of the current military junta and government from joining the Committee – leaving the possibility open for the junta leader and PM General Prayuth Chan-ocha, or any of his colleagues from the NCPO, the cabinet, the NLA and the NRC to suddenly end up on the Committee post-election. In any case, given the current military dominance over the political discourse the junta can already fill the committee with like-minded people, including a representative of the highly politicized judiciary.

The same Article 260 goes on to state that the committee could take any action with a two-thirds majority vote of its members. This means that 15 committee members could essentially deliver final and legally binding decisions without any political or judicial oversight. Thus in the new Thai “democracy”, a non-elected extra-parliamentary body with a substantial military membership would have the power to decide what “necessary steps” to take in any crisis situation, including the right to seize power from an elected government to return the situation “to normalcy as soon as possible”.

Thailand’s next constitution wants to rebuild a political system that is clean enough to appear as a democracy, but dirty enough for non-elected officials to intervene at any given time should the elected politicians steer too far away from the “reform” path. The implementation of the Committee for Reform Strategy and National Reconciliation seems so far the most obvious tool to that end. It creates an extra-parliamentary executive panel shadowing the cabinet of ministers – much the way a classic Chinese-style politburo would operate.

With the stipulated term length of the committee – five years with a potential extension with another five – it can comfortably stay on longer than any elected government has ever lasted in Thai history.