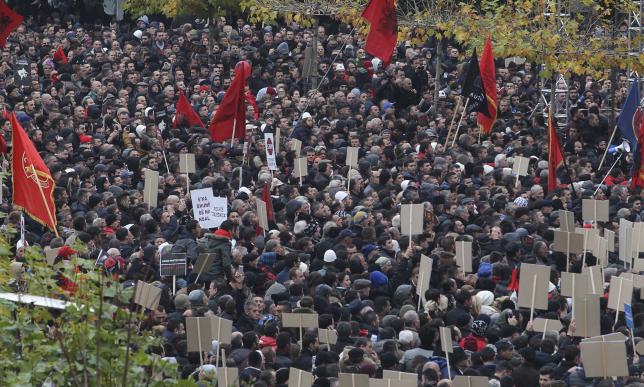 People gather in a peaceful protest called by Kosovo's opposition against the EU-brokered accord between Kosovo and Serbia in the capital Pristina, November 28, 2015. (photo credit: Reuters)
<p>Kosovo’s highest court ruled on Wednesday that parts of an European Union-brokered agreement with Serbia violated its constitution, after weeks of violent protests against the deal.</p><p>The August accord has given rise to Kosovo's worst political crisis since the troubled young Balkan state declared independence from Serbia in 2008. Police have arrested 13 opposition party members for repeatedly releasing tear gas in parliament in protest at the deal, and their supporters have clashed with police in the capital Pristina.</p>
Read the full article here: Reuters