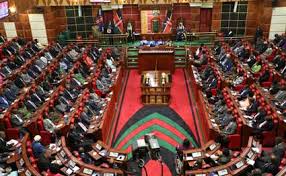 Kenyan Parliament (photo credit: Daily Nation)
<p><span>Speaker Justin Muturi yesterday rescued an amendment of the Constitution to get more women into Parliament.</span></p><p><span>This is after he set another date for the same vote to be done next Thursday. The Speaker made the decision after the MPs behind the Bill failed to meet the two-thirds threshold required to amend the supreme law. </span></p><p><span>By rejecting the Bill, the MPs - the 26 who voted No were from both coalitions - defied President Uhuru and Opposition leader Raila Odinga who had earlier lobbied the lawmakers to pass the bill. </span></p>
Read the full article here: Standard Digital