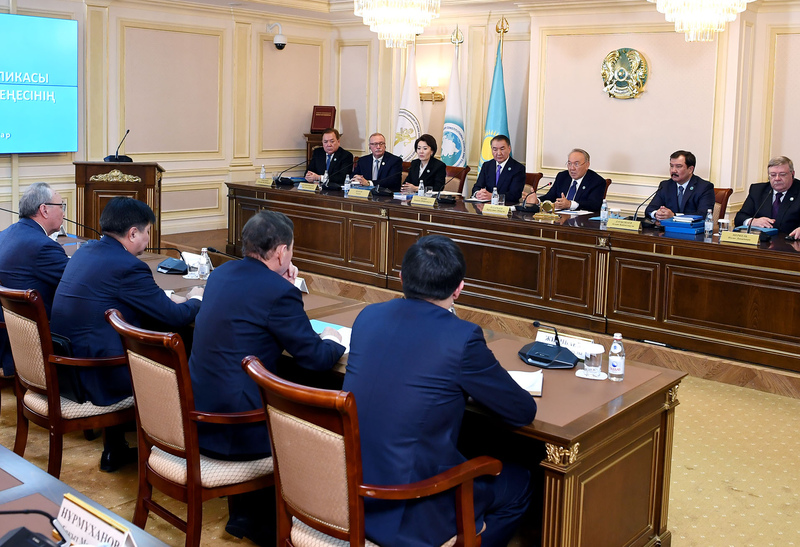 Constitutional Council of Kazakhstan (photo credit: AKI Press)
Kazakhstan’s Constitutional Council began its consideration of President Kassym-Jomart Tokayev’s proposal to amend the country’s Constitution to implement the reforms voiced in his recent state of the nation address, the Council announced [...]. The draft bill, which was developed with representatives of NGOs and lawyers, includes 35 amendments.  Some of the major ones are the abolishment of the death penalty, a ban on political party membership for the chairs and members of the Central Election Commission, the Accounts Committee and the Constitutional Council, governors and their deputies as well a ban on a political party affiliation for the President for the period of his or her term in the office and on positions at government and quasi-public sector for close relatives of the President.  The amendments also envisage transitioning the Mazhilis, a lower chamber of the Kazakh parliament, to a mixed proportional-majoritarian model, where 70 percent of deputies will be elected by a proportional model, and 30 percent by a majoritarian rule. “The draft law envisages further improvement of the forms of super-presidential governance that currently exist in the country. To this end, the head of state transfers some of his powers to other bodies or executes them by agreement with them. This is a continuation of the decentralization process that has been taking place in the country in recent years,” said Bakhyt Nurmukhanov, a member of a working group and head of the Constitutional Council Staff. [...] One of the major amendments will also be reestablishing the Constitutional Court, which has existed in Kazakhstan until 1995. Unlike the council, citizens will now be able to appeal directly to the court.
Read the full article here: Astana Times