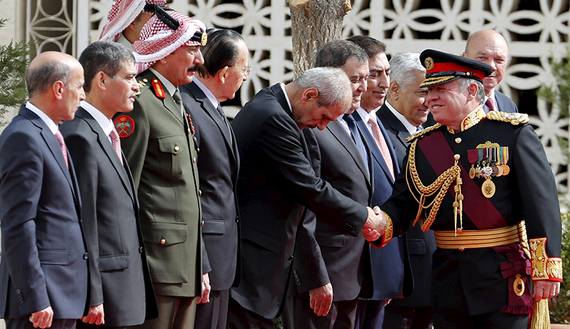 Jordan's King Abdullah shakes hands as he arrives for the opening of the third ordinary session of the 17th parliament (photo credit: REUTERS/Muhammad Hamed)

This article is also available in Arabic

The recent Jordanian constitutional amendments further concentrated power in a King who is neither legally nor politically accountable.  Despite their enormous implications to the system of government, the amendments were adopted without meaningful parliamentary debate and without even nominal public engagement – writes Sufian Obeidat.

On 4 May 2016, King Abdullah II of Jordan issued a decree ratifying amendments to the Jordanian Constitution. Over a period of seventeen days, with a short paragraph of legislative intent, and without any public involvement, the King and the National Assembly – composed of the Chamber of Deputies and the Senate - replaced the parliamentary system of government with a presidential monarchy - a hybrid of presidential and monarchic systems. The cabinet endorsed the draft amendments and submitted it to the Chamber, which adopted it in two days, while it took the Senate one session to approve it. Both houses of the National Assembly approved the amendments with a sweeping majority. Within two days, the King signed the decree issuing the new amendments.

Although the Constitution establishes a parliamentary system of government with a hereditary monarchy, in practice, the King has had the final say in government, while the cabinet has borne the political and legal responsibility on his behalf. Since the 1950s, the Constitution has undergone several amendments, mostly giving the King additional authorities at the expense of parliament. Once again, the King has expanded his powers, this time at the expense of the Council of Ministers.

The King in the Constitution

The powers of the King as described in the Constitution show the King as a constitutional monarch. In a parliamentary system of government with a hereditary monarchy, the King is the head of state and is immune from all liability and responsibility. As the King can do no wrong - because he reigns but does not rule, his written and verbal orders do not relieve ministers from responsibility. He (accession the throne is restricted to males) exercises executive power through his ministers and through royal decrees. Under the Constitution, the King exercises the powers vested in him by Royal Decree, which must be countersigned by the prime minister and the minister or ministers concerned.

Unlike most monarchies in Western Europe, the Jordanian King decides on extensive issues with final authority and without the need to follow the advice of the government. Among others, he appoints and dismisses the prime minister and the ministers or accepts their resignations, issues orders for holding parliamentarian elections, and appoints the speaker and other members of the Senate. The King also convenes, adjourns, or prorogues the National Assembly, may dissolve the Chamber or the Senate, and can relieve any senator of his/her membership in the Senate. The King’s powers also include ratifying laws and constitutional amendments upon their adoption by the National Assembly. He is the supreme commander of the army. The King has the right to grant a special pardon, commute any sentence and confirm a death sentence.

With all such prerogatives, the Constitution entrusts the Council of Ministers with the responsibility of administering all internal and external affairs of the state with a collective accountability to the Chamber for the public policy of the state and for the affairs of the ministries.

The King in practice

The first and last parliamentary Jordanian cabinet formed by, and responsible to, political processes existed sixty years ago. The late King Hussein asked the leader of the party who won the majority of votes in the 1956 elections to form a cabinet. The majority leader constituted a coalition cabinet, which included representatives of most of the then political parties. The new cabinet did not last more than six months: the King dismissed the cabinet, put under house arrest the sacked prime minister, declared martial law, and dissolved and banned all political parties, which continued until the early 1990s. Since then, no elections took place on a party basis, and consequently, no cabinet was formed on that basis.

Since 1957, the King ordered the holding of elections and dissolved the Chamber at his sole discretion. Despite the fact that ministers were subject to legislative accountability by means of vote of no confidence and questioning of the Chamber, the King appointed and dismissed cabinets at his own discretion and without the need to provide any justification.

Typically, the King selects prime ministers among an inner circle of trusted men who served in civil and military positions. To avoid public blame, the King generally selected strong and loyal men to occupy the office of the prime minister and granted them a substantial margin of power, which gave them considerable political and social weight even after they have left the office.

At the beginning of his tenure in 1999, King Abdullah II selected an experienced strong former minister as his first prime minister who did not last in office for long. Subsequently, the King selected less capable persons as prime ministers and abruptly sacked them. The King depended heavily on the head of the Intelligence Department, who became the most powerful person in the country.

The King also selects and dismisses army commanders and heads of intelligence who usually rise from within the institution. Despite the fact that the law provides that both institutions report to the minister of defense and the prime minister, they reportdirectly to the King. Senators are selected among those who usually keep in with the mainstream. The results of the continual rigging of parliamentary elections unmistakably demonstrate in the quality of “elected” deputies. Being the most influential and powerful apparatus in the country, the people generally blame the Intelligence Department for elections fraud. Thus, the Jordanian system of government is a hybrid political system combining a powerful King with an incapacitated legislature and a cabinet bearing the political and legal responsibility on the King’s behalf.

The 2016 Amendments: Formalizing the absolute monarchy

Fundamentally, the latest constitutional amendments have formalized the dominant powers of the King in practice. With no stated legislative intent, the amendments also included provisions allowing dual nationals to run for parliamentarian elections, or to be appointed as senators and ministers. Opposition to the amendment focuses on questions of loyalty of a dual national in a public office. Proponents argued that depriving dual nationals from assuming public posts discriminates against them, and deprives the country of their talents. The question that remains unanswered is why this part of the amendments was introduced at this time. Upcoming appointments to public posts might shed more light on the underlying reasons. The amendments also extended the term of the Speaker of the Chamber from one year to two years.

The most important amendments relate to the mode of exercising royal executive powers. The constitution was revised to give the King the sole power, without any countersignature by the prime minister or ministers concerned, to appoint the Crown Prince, the Regent, Senate Speaker and members, Chairman and members of the Constitutional Court, the Chief Justice, the commander of the army, and the heads of Intelligence and the Gendarmerie.

The stated legislative intent for the amendments was to consolidate the separation of powers, to enhance the independence of the Constitutional Court and the judiciary, and to strengthen the neutrality of the Gendarmerie and prevent it from influencing, or to be influenced by, politics. The official discourse added that the amendments are a step towards a parliamentary government where the political party with the highest representation in parliament will select the prime minister. The idea is that the King is withdrawing important appointment powers from parliament and the executive before he fully allows elected representatives to select the head of government.

Nevertheless, it is not clear how concentrating power in the hands of an unaccountable King could consolidate separation of powers or judicial independence. It is also not clear how the independence of the security apparatus would be compromised if cabinet is involved in the appointment of its chief. Reading the perfunctory language of the legislative intent together with the parliamentary government discourse indicates that the cabinet had no say in drafting and introducing the amendments. To the contrary, it only indicates King Abdullah’s rejection of the idea of submitting even part of his authority to a parliamentary government.

During the so-called Arab Spring, a popular movement emerged in Jordan in the spring of 2011. Among other demands, the protesters called for a constitutional monarchy to limit the King’s powers, elected governments, security reform and the formation of a Constitutional Court. To appease the popular sentiments, the King accepted to introduce a set of superficial constitutional amendments. Not long after the said amendments took place, the bloody events in Syria and Egypt intimidated Jordanians and ended the popular movement juxtaposing reform with security.

In order to consolidate the powers of the King, the stature of the prime minister and the idea of the parliamentarian government headed by a majority leader must be undermined. The amendment to article 50, which went unnoticed, confirms this impression. The amendment removed the death of the prime minister as one of the cases when the government had to resign. In such cases, the deputy prime minister, or the most senior minister, would head the cabinet until a new government is formed. This process denies parliament the opportunity to select the new head of government.

A government with no control over the heads of the army and security apparatuses shelves any hope for a civilian oversight over the armed and security sector. As the King is an unaccountable ruler immune from any liability, the latest amendments undermine any hope for the accountability of the military and security forces. Similarly, confining the appointments of the Chief Justice and the Chairman and members of the Constitutional Court in the hands of the King compromises the separation of powers and disables the system of checks and balances.

Even though the Jordanian constitutional regime is a hybrid system, where the King reigns and rules and yet is immune from liability, the 2016 amendments created further distortions to the constitutional balance of power. Jordanian cabinets are responsible before parliament for certain acts affiliated with cabinet only theoretically. Constitutionalizing the monopolization of power opens wide the door for oppression and corruption. The constitutional amendments complicate matters more and delay any hope for democratic reform in Jordan.

In parliamentary democracies similar to the Jordanian constitutional structure, the head of state gradually evolves into a titular leader, not an absolute ruler. The unwillingness of King Abdulla II to submit part of his authority to parliamentary governments and to effect serious constitutional reforms, and a system of checks and balances, represent a significant retreat from the token progress towards constitutional democracy and limited government initiated in the aftermath of the Arab Spring.

Sufian Obeidat is the President of the Arab Association for Constitutional Law. He practices before Jordanian courts and arbitration tribunals. Sufian also researches on security sector, political and constitutional reforms.