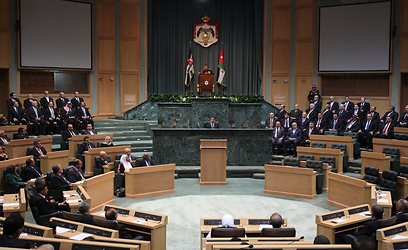 Jordan parliament (photo credit: y net news)
<p class="p1">The Lower House on Wednesday passed the constitutional amendments that gave new powers to the King and allowed citizens with dual nationalities to occupy senior public posts and parliamentary seats, among other changes.</p><p class="p4"><span class="s1">In the morning session, 123 deputies out of 142 who attended the vote agreed to a change in Article 40, allowing the King to exercise his powers via a Royal Decree without the need for the signature of the Council of Ministers. &nbsp;</span></p>
Read the full article here: The Jordan Times