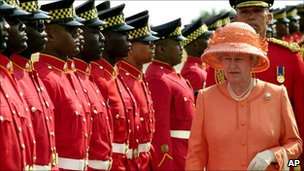 Queen Elizabeth visits Jamaica (photo credit: The BBC)
<p>The Government has signalled that it intends to make good on its promise to sever colonial ties with Britain by bringing a Constitution amendment bill to Parliament to have the Queen of England Elizabeth ll, replaced with a non-executive president as head of state.</p><p>This would do away with the governor general as the Queen’s representative here, and make Jamaica a republic. A non-executive president, like the governor general, would still be a symbolic leader and perform a representative and civic role but with no powers to make policy. But he or she could use discretionary powers for extraordinary political intervention, based on the Constitution.</p>
Read the full article here: Jamaica Observer