The hyper judicialisation of politics in Moldova: Opportunities for constitutional reform 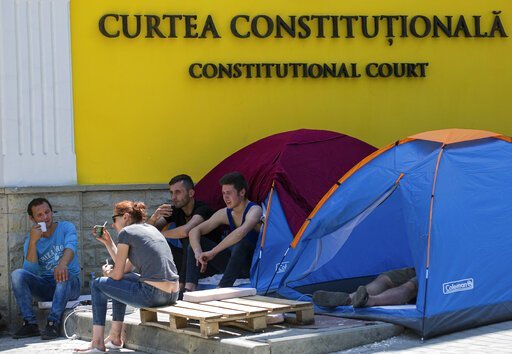 Supporters of the Former Government camp outside the Court's premises (photo credit: CBS 17)

The Moldovan Constitutional Court has been at the centre of the recent political crisis. While its role in mediating political conflicts through constitutional arbitration may be necessary, the Court may have become too interventionist, undermining government stability and its own legitimacy. While the resignation of judges provides opportunities for constitutional reform, sustainable solution lies in changes in political culture – writes Professor Zoltán Pozsár-Szentmiklósy.

On 24 June 2019, all judges of the Constitutional Court of Moldova resigned, following  a familiar paralysis. Crucial state institutions are suffering from a crisis of questionable legitimacy and inability to perform their functions. After the parliamentary elections held on 24 February 2019, Parliament was not able to form a coalition government for months as the most powerful parties (the Party of Socialists, having strong Russian relations, the pro-European ’ACUM’ Bloc, and the Democratic Party led by the oligarch Vladimir Plahotniuc) won parliamentary seats in very similar proportions. Therefore, a coalition of two was needed for a parliamentary majority.

On 8 June, the announcement of the coalition between socialists and ACUM and subsequent appointment of ACUM-leader Maia Sandu as prime minister triggered renewed tensions between constitutional organs. On the same day, the Constitutional Court invalidated the election of the speaker of Parliament, as well as the appointment of the Prime Minister, claiming that – following its interpretation issued the previous day – Parliament was not properly constituted to exercise its full powers. According to the Court, Parliament was not able to form a government in the three-months period stipulated in the Constitution, and hence had to be dissolved. One day later, the Court suspended President Igor Dodon from office for failing to dissolve Parliament. At the same time, the Constitutional Court empowered the acting (former) prime minister, Pavel Filip (nominated by the Democratic Party) to act as an interim president, who right after that declared the dissolution of Parliament and called for early parliamentary elections.

The Moldovan experience demonstrates the dangers of politicisation of constitutional frameworks and the judicialisation of politics.

At the heart of this constitutional crisis is a deep political conflict, and constitutional norms were partly to blame for enabling the stalemate. Instead of functioning as checks and balances, the Moldovan experience demonstrates the dangers of politicisation of constitutional frameworks and the judicialisation of politics.

While the political crisis was caused by extreme political polarisation and was ultimately resolved through political machinations, the constitutional framework that enabled the situation remains. The Moldovan crisis offers lessons on the impact of the functioning of certain constitutional norms for the stability of governmental systems.

Following a complicated history, the Republic of Moldova became an independent country after the collapse of the Soviet Union. The period of modern statehood of this multi-ethnic country officially began with the adoption of the Declaration of Independence by Parliament on 27 August 1991. The country’s new Constitution was adopted on 28 July 1994. The Constitution is based on classic liberal constitutional principles, contains safeguards for fundamental rights, and outlines structures and limits for the exercise of state power.

Parliament is composed of 101 members, elected based on universal, equal, direct, secret and freely expressed suffrage, for a four-year term. As a reflection of the country’s parliamentary system of government, Parliament must grant its vote of confidence for a designated prime minister, as well as the programme and composition of the government with the majority vote of its members – a precondition for the appointment of the government. Parliament may also end the mandate of the government through a vote of no confidence.

Under the Constitution, the President is not expressly part of the executive branch. However, alongside the traditional powers which belong to a ceremonial head of state in parliamentary systems, he/she has significant powers which can influence the room for manoeuvre of other state organs. For instance, he/she may address messages to Parliament, initiate national referenda, and repeal government acts which run contrary to legislation. Because of the significant legislative and executive functions that the President enjoys, the characteristics of semi-presidential governmental systems are also present.

The Constitutional Court enjoys constitutionally guaranteed legal status and independence, and has a comprehensive set of strong powers, including review of laws and acts as the final arbiter in all legal disputes related to the exercise of powers of other state organs. The Court has over the years emerged as a significant power broker.

The Constitution regulates in detail the relations between Parliament, the President and the Government. Despite the detailed provisions, or perhaps because of them, stalemates related to the exercise of political powers and constitutional crises are common. According to the original provisions of the Constitution, the people directly elected the President. An amendment to the Constitution in 2000 changed this modality, prescribing the indirect election of the President (election by the Parliament). Following the changes, Parliament failed to elect a President on three occasions, as the required three-fifths majority was not met, prompting the dissolution of Parliament and organisation of early elections in 2000, 2009, and 2010. On the whole, this period was characterized by political and governmental instability. The crisis that the constitutional change enabled was resolved in 2016 after the Constitutional Court in a controversial decision declared the provisions of the 2000 constitutional amendment unconstitutional both on procedural and substantive grounds, thus the system reverted back to a directly-elected president.

Needed interventions or a Constitutional Court on steroids?

Under the Constitution, the Constitutional Court has considerable powers, which strongly impact the space for manoeuvre of political organs. Alongside the examination of constitutionality of laws, the Court examines the constitutionality of decisions, decrees and ordinances of the central political powers (Parliament, Government and President). The Court also confirms the results of elections and referenda, and rules on the functioning of political parties in accordance with constitutional provisions. Moreover, it is entitled to ascertain the concrete circumstances justifying the dissolution of Parliament and expresses its preliminary opinion on draft constitutional texts. Because only state entities or political organs can submit appeals to the Court (e.g., the President, Government, Supreme Court, members of Parliament, parliamentary factions, the ombudsperson, etc.), applications often represent a political interest.

The powers of the Court are detailed in the Law on the Constitutional Court and the Constitutional Jurisdiction Code.  Both documents refer to the particularly unusual competence of the Court to examine the constitutionality of individual acts issued by state institutions. These are ordinary decisions based on the competences of the state organs (e.g., nominating and electing state officials, awarding titles of honour, etc.), which differ from acts having normative force, which provide a regulation for a certain field of social life.

The Constitutional Court can examine the validity of individual acts of state institutions, in addition to reviewing norms.

In its decisions related to the present conflict – based on appeals submitted by political organs and stakeholders – the Constitutional Court (a) interpreted the provisions of the Constitution on the period of time during which Parliament should elect its leaders and form a Government; (b) based on this, invalidated individual acts of the Parliament on the election of the Speaker of the House as well as individual acts of the President on the appointment of the prime minister and the Government; subsequently (c) suspended the President from office and designated an interim president; and in the end (d) reversed all these decisions. Under these decisions, the Court first specified the duties of the Parliament and the President related to the appointment of the Government, then it invalidated the actions of these state organs that contradicted the specified considerations and determined the related legal consequences. Under the constitutional order for the interim presidency, the Prime Minister follows the Speaker of Parliament. However, in the Court’s view, the election of the Speaker was not valid, which is why the prime minister became the designated interim president.

These decisions were very controversial and had questionable legal basis. Under the Constitution, the dissolution of the Parliament for failure to form a Government within three months is a possibility, not a duty of the President, as reflected in the use of the phrase ‘may dissolve’ in article 85(1). The suspension of the President was therefore not justified. Furthermore, this discretionary nature of the presidential power of parliamentary dissolution has comparative parallels. It is even more worrisome that the Constitutional Court suspended the President from office on the basis of ‘the impossibility to exercise his duties for more than 60 days’ – a constitutional provision designed to solve situations when the head of the state cannot exercise his/her duties due to objective reasons (e.g. illness), and not in relation to the exercise of discretionary powers.

The resignation of the members of the Court was no surprise, considering the loss of legitimacy, and provides opportunities for constitutional reform.

It is clear that the initial conflict had roots in politics and was ultimately resolved through political processes, with pressure from external powers. Despite the uncertainties related to the form of government and the powers of the President, the provisions of the Constitution did not lead directly to the constitutional crisis, but may have enabled it. According to the constitutional power allocations, the Constitutional Court is the final arbiter of all possible disputes related to the exercise of political powers. In some transitional democracies, constitutional courts were created as a reaction to the deep mistrust for political organs. However, in the case of Moldova, the ‘superpower’ of the Constitutional Court to control political institutions in stalemate situations has led to an interventionist practice of shaping political conflicts and power allocations of the country directly, causing instability. This judicial impact on government stability is far more concerning than the cases behind the classic critiques of judicial review.

While Moldova may not need urgent constitutional reforms, such change could help clarify the role of the Court as well as the safeguards that support its independence. The resignation of the judges provides a useful opportunity in this regard. Fundamentally, a change in political culture and attitudes of the stakeholders is needed. Politicians should focus on politics and refrain from seeking to control independent state organs. The Constitutional Court in a new composition should in turn focus on purely constitutional questions, professional standards and – according to the Venice Commission – must ‘maintain equal distance from all branches of power and (…) act as an impartial arbiter in case of collision between them’.