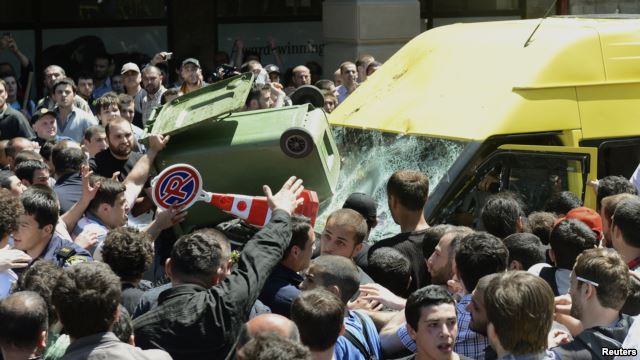 Clash between gay rights campaigners and anti-gay activists (Photo credit: RFE/RL's Georgian Service)
<p><span>Georgian Prime Minister Giorgi Kvirikashvili says his ruling coalition will draft a constitutional amendment defining marriage as a union between a man and a woman.&nbsp;</span></p><p><span>&nbsp;</span><br><span>Kvirikashvili and the Georgian Dream (GD) coalition appear eager to quash a civil rights lawyer's effort to legalize same-sex marriage in the socially conservative, mostly Orthodox Christian country in the South Caucasus.&nbsp;</span><span>Georgian officials frequently cast their country, which is seeking closer integration with NATO and the EU, as a beacon of European values in the former Soviet Union, and Kvirikashvili said on March 7 that GD is committed to wiping out all forms of discrimination.</span><br><span>&nbsp;</span></p>
Read the full article here: By RFE/RL's Georgian Service