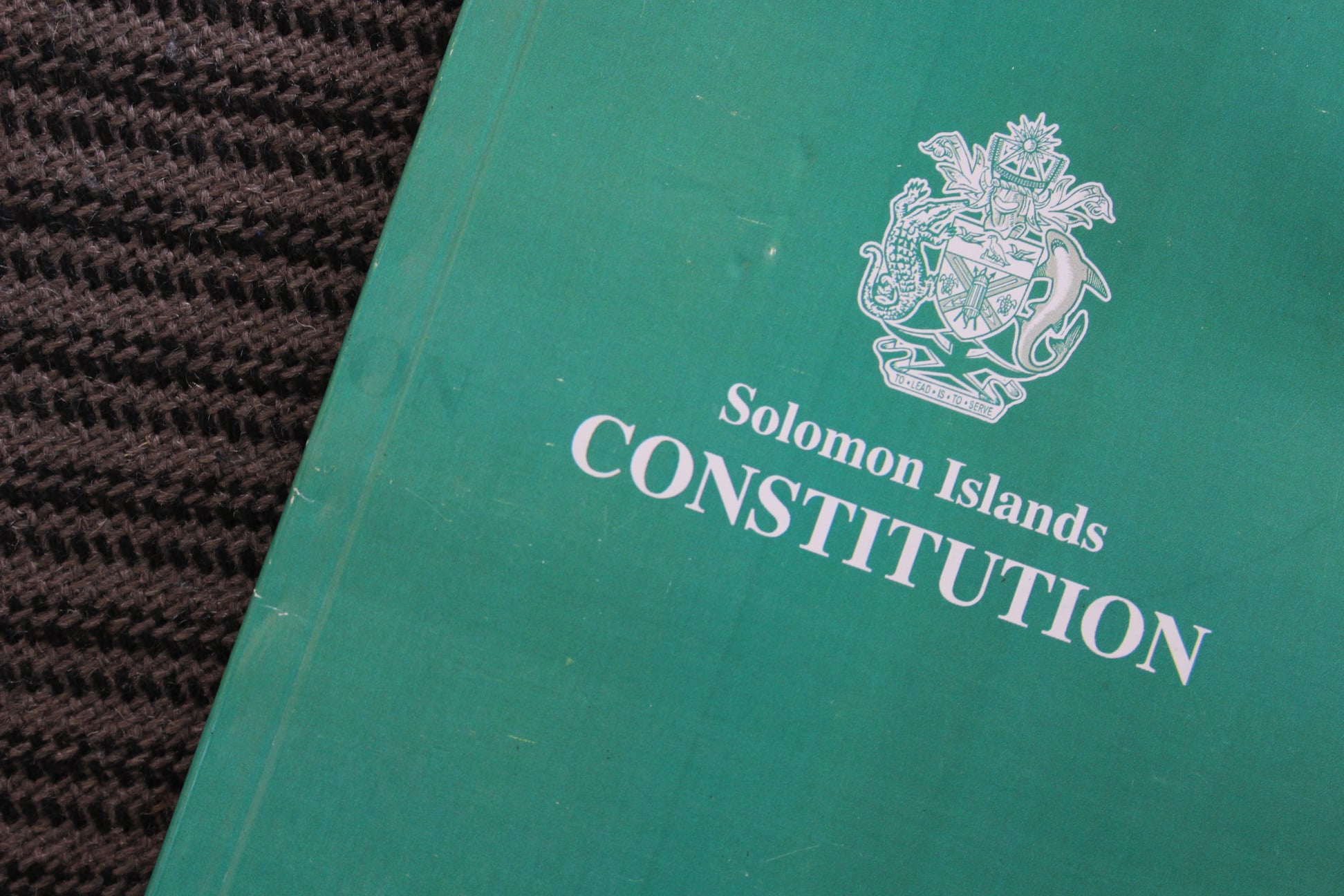 The government of Solomon Islands is mooting the idea of extending parliament's term via constitutional amendment, either through a sunset clause or permanently, in light of the general election and Pacific Games falling in the same year. While the Opposition, business sector, and public seem united against the proposal, a leaked memo reveals that the government’s decision may be pre-baked and unaffected by current consultations. The government, if it goes down the route of amendment rather than snap elections, would set a dangerous precedent of delaying elections and amending the Constitution to suit the party in power - writes Dr. Joseph D. Foukona

In April 2021 a leaked document showed that the Solomon Islands government was considering a constitutional amendment to extend the current parliament’s term from four to five years, thus delaying elections for a year. One of the government’s main reasons for proposing such an amendment is that Solomon Islands is hosting the 2023 Pacific Games from 19 November to early December 2023. The government contended that “resources, manpower, and logistics would be stretched in two major events”: elections in mid-2023 and the Pacific Games later that year. The way this proposal came to light and the unsatisfactory rationale for delaying elections have generated concerns around the government’s true motivations. This piece examines the suspect timeline and alternate options available to the government to avoid the concerning precedent of capricious constitutional amendments to benefit the incumbent government, and threats to democracy posed by delaying elections without sufficient justification.

Prime Minister Manasseh Sogavare’s coalition government – the Democratic Coalition Government for Advancement (DCGA) – is serious about pursuing this policy proposal, which has emerged midway through its term. The DCGA is made up of the Ownership, and Unity Responsibility Party (OUR Party), which is the core group led by Sogavare, the Democratic Alliance Party (DAP), the Kadere Party, and the Solomon Islands People First Party. The OUR Party was formally registered after the 2019 national elections with most of its members elected as independent candidates while others switched party affiliation after the election. The DCGA proposal is tainted by suspicious circumstances: the public only became aware of this policy proposal when the Parliamentary Opposition Group asked Sogavare about it in parliament on 19 April 2021. Sogavare responded that the proposed policy would follow the proper process and not be rushed.

A leaked confidential cabinet document revealed that the Cabinet had made a resolution in February 2021 to extend the parliament’s four-year term...

However, a leaked confidential cabinet document revealed that the Cabinet had made a resolution in February 2021 to extend the parliament’s four-year term, ostensibly to implement their development plans and programs for the term. The government took a back foot to explain its intentions, and Sogavare said in parliament that Cabinet’s endorsement “was for the policy to be developed and public consultations were to follow.”

During this flurry of confusion and criticism, the government directed the Special Secretary to the Prime Minister (SSPM) and the Attorney General to lead consultations. So far, they have carried out consultations with specific groups such as the provincial premiers, the Solomon Islands Chamber of Commerce and Industry (SICCI), and the Solomon Islands Full Gospel Association (SIFGA).

The Governor-General, Sir David Vunagi, encouraged members of parliament to consult their constituencies about the proposed policy. This call is logical because no political party or member of the current parliament campaigned on the idea of extending the life of parliament during the nation’s general election in April 2019. The SSPM stated that consultation is still ongoing, and after that, they will report back to Cabinet to make a decision. He explained if Cabinet approves the policy proposal, they “would not need to consult [the people]” but rather would “draft the bill and take it up to Parliament.” He maintains that Cabinet has not yet decided on the proposal. However, the Opposition Leader, Hon Matthew Wale, and the Independent Group Leader, Hon John Dean Kuku, argued that the leaked cabinet document, to the contrary, shows that the government’s claim that Cabinet is yet to approve the policy proposal is misleading.

Groups involved in the consultation, such as SICCI, have, in fact, indicated that businesses do not support the government’s proposal to extend parliament’s life. The Parliamentary Opposition group has also stated that they do not support the idea. The Independent Group Leader has now called on the Prime Minister to take the proposal “to the people in the 2023 election.” Based on the responses from the various groups, it is apparent that a cross-section of the public strongly opposes the extension of parliament’s term from four to five years. Despite these negative responses, it is obvious that DCGA is intensely interested to proceed with the policy proposal.

The motivation for this policy proposal is fundamentally shaped by the direct diplomatic presence of the People’s Republic of China...

The motivation for this policy proposal is fundamentally shaped by the direct diplomatic presence of the People’s Republic of China (PRC) in the country since September 2019 and the Pacific Games investment project. The Pacific Games is one of the government’s key priority projects under its redirection policy. Under an Implementation Agreement signed with the government in 2020, PRC funds “more than 70 percent of the facilities needed for the [Pacific Games].” This is a source of pride for the government as the ‘biggest recipient’ in the Pacific of PRC’s apparent generosity, although infrastructure projects are far from unique. They are not gifts to any nation, either, but rather part of China’s soft power, here using ‘stadium diplomacy’ to achieve and maintain diplomacy in Solomon Islands and elsewhere in the Pacific. It is in the government’s interest to maintain power so that it can be featured prominently with PRC when the Pacific Games facilities are completed by mid-2023. Hanging on to power is necessary for political performance and capital because, given the fluidity of party politics in the country and voter mentality, there is no guarantee the government will win the next election. What remains unclear, however, is whether the government intends merely to delay the national general election or rather to lengthen the maximum parliamentary term, or both.

If the government’s rationale is substantiated by data, a more reasonable approach would be prioritizing the national general elections over the Pacific Games to ensure the Constitution remains intact as the supreme law, rather than a document easily amended for the sake of such trivialities as hosting a two-week sporting event. Not surprisingly, however, there are motives aside from the interference by a sporting event. The leaked cabinet paper shows that other reasons are “unfinished work on the federal system” and lack of implementation of “the truth and reconciliation report.” The Prime Minister also recently explained in parliament other reasons such as the need for electoral reforms and the cost of voter registration before the election. Such reasons are equally questionable and have more to do with how a government executes its policy responsibilities. For all these tasks, the government does not need a constitutional amendment that would provide it with more time in office, but rather simply a deeper commitment to completing the work with which it has been charged.

Although the government's proposal to extend Parliament’s maximum term seems to emphasize a constitutional amendment, the Governor-General outlined a range of other policy options that the government could consider: “1. Early dissolution of Parliament; 2. Hold the general national election in 2023 as scheduled; 3. Defer the National General Election from 2023 to 2024; 4. Permanently increase the term of Parliament from four to five years [sic].” Options 1 and 2 are permissible under section 73(1) of the Constitution. That provision gives parliament the power to decide whether it should vote for an early dissolution before its scheduled maximum term of office ends. The Governor-General then dissolves parliament following the parliamentary resolution. As a result, for this option there is no need to amend the Constitution.

The other two options (3 and 4) would require a constitutional amendment. These options follow a constitutional process that is quite distinct from what the government seems to be pursuing. As established by section 61(1) of the Constitution, parliament may amend the Constitution as part of its lawmaking function. Section 61(3) stipulates that the bill shall only be passed if “supported at the final voting on two separate readings in Parliament by the votes of not less than two-thirds of all the members of Parliament.” The Standing Orders of Parliament (SOP), under SOP 71A, establishes a Constitutional Review Committee (CRC) comprising of six members of the legislature nominated by the Speaker. It currently comprises two members of the Opposition, two government MPs, and an independent MP (the Chairperson yet to be appointed by the Speaker). The CRC is mandated: “(a) to review the Constitution regularly and advise the government on any changes as the Committee may deem necessary; (b) to examine any proposed changes to the Constitution and request submissions of views thereon from individuals or groups; (c) to deal with and advise on any matters relating to the use, abuse or misuse of constitutional powers, rights or responsibilities.” SOP 72 (11) requires that after CRC’s deliberation on a constitutional matter or amendment proposal it should report to parliament. This process shows that the CRC has the mandate to review a constitutional amendment proposal before parliament can proceed to debate and pass it, and it will be interesting to see whether, unlike in previous amendment processes, the CRC would play a more prominent role in this process should the government table an amendment bill.

All the statements by government officials up to now suggest that the government is focused on amending the Constitution.

The maximum term of Solomon Islands parliament is set by section 73(3) of the Constitution. The parliament has undoubted power to either dissolve itself before its maximum term ends or extend its life by constitutional amendment. The government floated the idea to extend parliament’s maximum term by an extra year, citing reasons that are more about government interest than parliamentary representation, but if the parliament is dissolved, the people can choose whether to give the government another mandate generally, and specifically to pursue a constitutional amendment to permanently elongate the term of parliament. If the government is concerned about implementing its policy objectives and programmes, it needs to work more quickly, not change the “rules of the game” mid-match. Government officials have used state resources to defend the government’s preferred view and policy intention regarding extending parliament’s life. The Leader of Opposition, the Leader of the Independent Group, and public stakeholders have rejected the idea. While consultations are ongoing, many are concerned the outcome is pre-baked, given the leaked cabinet paper and the government’s insistence on the constitutionality of the proposed course of action. The government has not provided any comprehensive and evidence-based rationale to justify the proposal for extending parliament’s life, thus creating an environment for political deception and speculation, potentially producing a dangerous precedent of delaying elections and amending the Constitution to suit the party in power. Defenders of democracy must take note, and may need to seek lawful ways to prevent such abusive constitutional amendment, including potentially through amending the amendment procedure itself to require a referendum or elevating the majority required for certain amendments.

Dr. Joseph D. Foukona is a Solomon Islander law and history scholar. He is an Assistant Professor, Department of History, University of Hawaii at Manoa, USA.

Click here for updates on constitutional developments in Solomon Islands.