The end of Japan’s pacifist constitution? Against welcoming an unknown angel 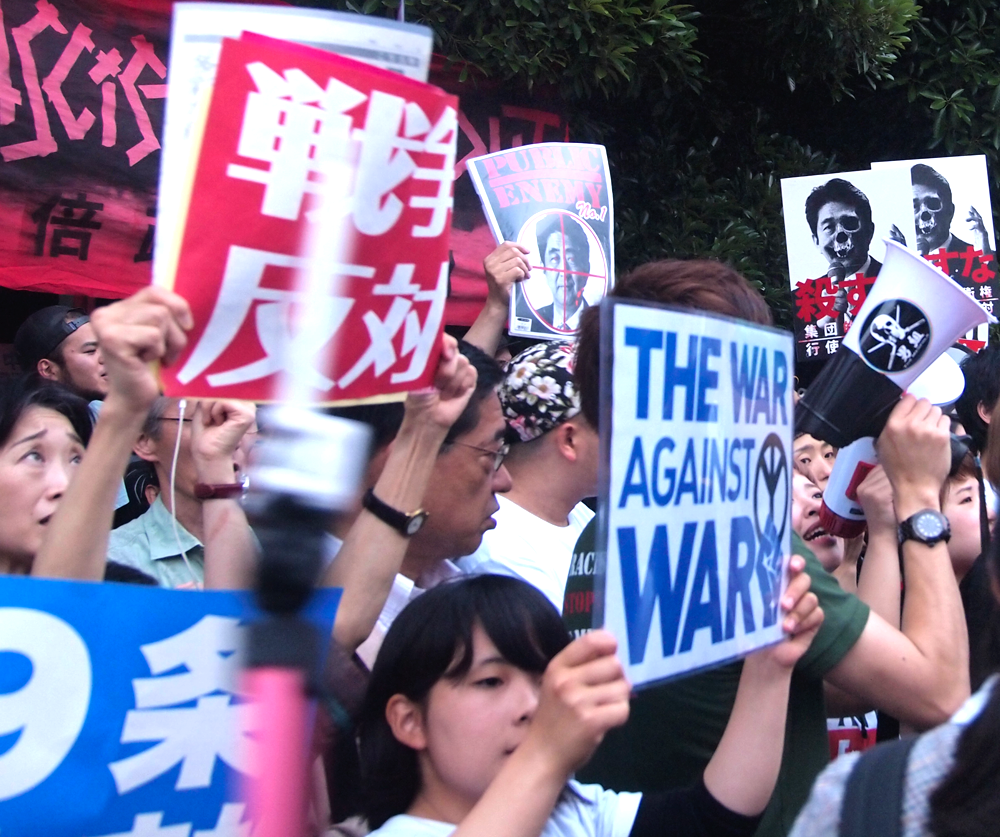 Prime Minister Shinzo Abe’s proposal to amend article 9 of the Japanese Constitution courts uncertainties that could undermine established understandings on the use of military force. While the ruling coalition may possibly garner the necessary legislative supermajority, the requirement for the popular approval of any proposed changes is likely to prove more daunting – writes Professor Hasebe.

On 3 May 2017, the 70th anniversary of the coming into force of the Constitution of Japan, Prime Minister Shinzō Abe made public his long held intention to revise Article 9 of the Constitution in his video message sent to and delivered at a pro-amendment meeting in Tokyo. One of his proposals is to add a new clause, Clause 3, to Article 9, which will make it clear that the government can keep the Self-defence Forces while maintaining the present clauses 1 and 2, renouncing war as a sovereign right of the nation, and precluding the maintenance of land, sea, and air forces, as well as other war potential. He also mentioned that he hoped to see the new clause come into effect in 2020. If successful, this would be the first amendment to the decades old Japanese Constitution.

Since he was appointed as the 96th Prime Minister in December 2012, Mr Abe has been reticent about proposing specific amendments to the constitution. Nevertheless, he has criticised the rigidity of the amending process stipulated in Article 96, which requires a concurring vote of two-thirds or more of all the members of each legislative House and then approval in a national referendum, and advocated that amendments should be realised through a less rigid process. This time, he appears to be uncharacteristically impetuous in proposing a revision in Article 9, which is the very core of the pacifism in the Constitution of Japan.

A couple of minor right-wing parties, such as the Japan Restoration (Nippon-Ishin) Party and the Japanese Spirit (Nihon no Kokoro) Party, immediately welcomed Mr Abe’s initiative. However, most of the opposition parties, such as the Democratic Progressive Party, the Communist Party, and the Social Democrats, strongly criticised his proposal as being half-baked and harmful to constitutionalism. Moreover, there are some voices, even among the ruling Liberal Democrats, indicating that his abrupt intervention may make parliamentary negotiations for amending the Constitution more, rather than less, difficult. The junior partner in the ruling coalition, the Komei Party, expressed the view that it is better for an amendment to be made with a broad consensus among political parties and in accordance with public opinion.

The calculus behind Mr Abe’s proposal is unclear. There are several possibilities. As is well known, successive Japanese administrations have held that despite Clause 2 of Article 9, which prohibits the government from maintaining any ‘war potential’, the Self-defence Forces are constitutional forces that are necessary to protect the lives and property of the people of Japan. In addition, the range of roles and missions of the Self-defence Forces has been meticulously determined and restricted through authoritative interpretations of the Cabinet Legislation Bureau, which undertakes the interpretation of the Constitution for the Cabinet. Mr Abe may want to revoke norms that surround and restrain the actions of the Self-defence Forces.

However, Mr Abe’s objective may simply be to amend any part of any article of the Constitution due to his ideological stance is that the current Constitution should be changed as soon as possible because it is an imposed one and has never been amended to give it a unique Japanese identity. Perhaps he thinks that adding a new clause to Article 9 will be the easiest way to do that, though the wisdom of his calculation is dubious.

At the same time, it is doubtful whether this revision, if realised, will solidify Japan’s security. In July 2014, the Abe administration declared that the use of the right of collective self-defence, which was considered unconstitutional by previous administrations, is constitutional within certain limits, when the right to life, liberty, and the pursuit of happiness of the Japanese people are jeopardised because of military attacks against foreign countries which are in close relationship with Japan. This forcible change of a long-held and repeatedly confirmed authoritative view was made without providing sufficiently persuasive reasons. This change has been severely criticised as undermining the concept of constitutionalism. Moreover, it is not certain whether such use of military force would contribute to peace and security in East Asia. Instead, it may bring about military expansion in neighbouring countries, such as China. The latter outcome would make all parties involved more prone to miscalculation, partly because even high-ranking government officials have expressed contradicting views as to the new interpretation of Article 9. Because of these uncertainties, the exact nature of the roles and missions of the Self-defence Forces has become more vague and ambiguous.

The same thing may be said about the possible results of the revision of Article 9 as proposed by Mr Abe. If the revision were realised, the Self-defence Forces would be ‘constitutionally legitimatised’ under the new Clause 3. However, it would become more difficult for the Japanese people and outsiders to predict under what conditions Japan might exercise the use of its military forces. The meticulously refined restrictions laid down by successive administrations, which were destabilised by the change of the government view in 2014, might wholly lose their relevance under the new clause. New restrictions would have to be produced from scratch by government officials.

As President Donald Trump of the United States puts pressure on North Korea to abandon its missile and nuclear weapons programs, the military tension in East Asia is becoming heightened. President Trump has sent the USS Carl Vinson, a Nimitz-class super carrier, and its strike group to the Sea of Japan to show off the American military might. Mr Abe may think that this situation, which he described as a ‘deteriorating security situation’, provides a favourable environment to initiate the revision of Article 9. However, it is unlikely that revising Article 9 and enlarging the roles and missions of the Self-defence Forces will persuade North Korea to abandon its military projects. North Korea’s objective is to maintain the current political regime and it assumes that holding the capability of attacking the United States with nuclear bombs is the only effective way to achieve that.

According to an opinion poll conducted by the Asahi Shimbun newspaper from March to April 2017, 63% of people polled said that they were against revising Article 9, while 29% said that they were in favour of it. Considering this unfavourable public sentiment, it will not be easy for the ruling coalition to build a consensus within the Parliament that is strong enough to amend Article 9 in accordance with Abe’s proposal, although the ruling coalition of the Liberal Democrats and the Komei Party now control a two-thirds majority in both Houses.

The apparent solidity of the Abe administration does not derive from the fact that people have increasingly supported its policies. The number of total votes the Liberal Democrats acquired during the general elections under the Abe administration is less than that acquired at the election in 2009 when the Asō administration lost to the Democrats. The total number of votes the Liberal Democrats received at single-member districts was 27,301,982 in 2009, 25,643,309 in 2012, and 25,461,449 in 2014. Rather, it appears that the Abe administration’s apparent strength comes from the widespread apathy among the electorate, brought about by the administration of the Democratic Party between 2009 and 2012. Accordingly, even if the ruling coalition manages to muster the necessary parliamentary supermajority for the proposed amendment, the requirement for approval in a popular referendum is likely to prove more daunting.

On 3 May, Mr Abe also proposed the addition of a new constitutional clause, stipulating that higher education services should be provided for free. The relevance of such an amendment is difficult to understand. In order to provide free higher education, the government would have to muster the financial resources for it. The constitutional clause itself is not enough. On the other hand, if the government could actually gather the resources, there would be no need for the constitutional clause. The only plausible motive for this proposition is to make an alliance with the Japan Restoration Party, which has long promoted this amendment. It is also possible that this reform proposal may have been added with a view to boost popular support to the overall reform package, especially at the referendum stage.

The current Constitution and its received interpretations have long precluded the risk of returning to militarist autarchy Japan experienced before and during the Second World War, kept Japan out of conflict, at home and abroad after the war, and allowed the state to focus its effort and resources on socio-economic development. We should not hastily revise the Constitution when we are familiar with its meanings and practices. Here too, a known devil is probably better than an unknown angel.