Do you hear the people sing?: Thais demand a democratic constitution to replace the junta 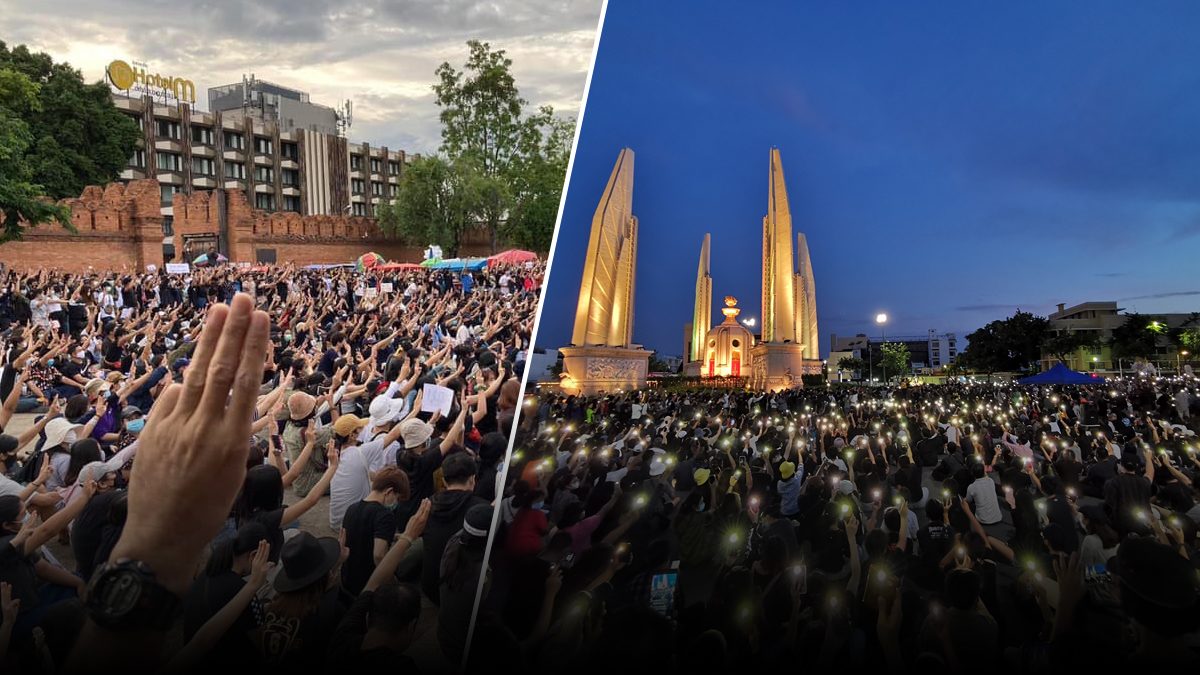 In Thailand, calls have been growing increasingly louder to replace the 2017 junta-backed Constitution with a new, democratic constitution. However, rigid Charter amendment rules and a Constitutional Court ruling that imposes additional procedural roadblocks are frustrating the process. A potential workaround, section-by-section constitutional amendments, are unlikely to satisfy protestors - writes Dr. Ponson Liengboonlertchai.

The Beginning of the Story

In March 2021, a ruling from Thailand’s Constitutional Court stymied efforts to amend the 2017 junta-backed Constitution. The Court imposed a new, mandatory two-referendum requirement on Parliament: one to attain initial permission to draft a new constitution, and another to approve such a draft. Since the current Constitution’s amendment rules are nearly impossible to satisfy in the current political climate, this added procedural roadblock makes a new constitution even more unlikely. But how did we get to this point, and what is the future for Thais’ increasingly vocal demands for a truly democratic constitution?

Thailand has a cyclical history of coups followed by new constitutions. After the 2014 coup, General Prayuth-Chan-ocha, the coup leader, declared a year-long roadmap to peace, including drafting a new democratic constitution. But rather than implementing the plan and holding elections for a civilian government, Prayuth sought to remain in power by appointing all members of the National Assembly to vote for him as the Prime Minister, and himself appointing allies to key government positions. Under Prayuth’s interim administration, from 2014–2017, he continuously delayed general elections, at the same time reassuring Thais that he would leave office. In October 2014, the National Council for Peace and Order (NCPO), headed by Prayuth, created the National Reform Council (NPC) to oversee the constitution-making process. The NPC appointed a Constitution Drafting Committee, which spent about nine months designing a new constitution. In September 2015, however, the NPC rejected the Committee’s draft, which led to the appointment of a new Constitution Drafting Committee.

The current 2017 Constitution was approved in a military-dominated referendum.

When the (second) junta-appointed Constitution Drafting Committee released its draft in March 2016, it was clear that Prayuth had engineered the process to stay in power and entrench the military’s influence in Parliament. This draft constitution established a system aimed at supporting the military-backed Palang Pracharath Party (PPP) and cabinet through constitutional mechanisms. For instance, a new electoral system was designed to avoid domination of major popular parties like the Pheu-Thai Party (PTP) and Democrat Party (DP). Many members of these parties switched to PPP, thus resulting in it in becoming the governing party. Besides, the formation of an unelected senate, and a reorganization of independent state institutions like the Constitutional Court were parts of the new constitution. The draft constitution was approved in August 2016 in a military-dominated referendum that took place under a repressive ban on campaigning, and with the threat of extended military rule. After the enactment of the junta’s constitution in 2017, Prayuth delayed general elections for another two years (with a variety of excuses), until he finally called a general election and became the Prime Minister under the 2017 Constitution.

Thais widely accuse the government headed by Prayuth of maladministration. Aside from increased spending, especially defense spending, without justification, there have also been suspicions about potential corruption and cronyism. Constitutional rights violations have also been rife throughout the junta administration, especially freedom of expression. Anger bubbled into protests when, in February 2020, the Constitutional Court ordered the dissolution of the Future Forward Party (FFP), a fledgling pro-democracy party popular with young people, that had threatened Prayuth’s power by gaining the third-largest share in the March 2019 elections.

A Rough Ride in the Parliament

Mass street protests continued throughout 2020, and the calls coalesced into three key demands: Prayuth’s resignation, reform of the monarchy, and a new constitution. Police responded with violent force against the protestors, and while Prayuth initially stated that protestors would be prosecuted, he eventually conceded and promised publicly that by December the government would finish the preparatory process to enable the necessary constitutional amendments for a constituent assembly.

Mass street protests continued throughout 2020, and the calls coalesced into three key demands: Prayuth’s resignation, reform of the monarchy, and a new constitution.

Afterwards, seven constitutional amendment bills were submitted to Parliament: five from opposition parties, one from the government, and one popular initiative signed by over 100,000 voters. Three bills were to amend ‘the amending clause’ of the Constitution, which would allow the establishment of a constituent assembly to draft a new constitution, while the remainder concerned the amendment of other constitutional provisions, such as the abolition of senatorial power to vote for the Prime Minister, revocation of military-coup orders functioning as laws, and the reform of the electoral system. After two days of parliamentary discussion, all bills were dismissed. Instead, both houses of parliament delayed the vote on first reading and insisted on the appointment of a joint committee to study the amendments and provide a written report before moving forward.

After this report was submitted more than a month later, five of seven bills, i.e., the popular initiative for drafting a new constitution and four bills of the opposition parties repealing senatorial powers and coup orders, were rejected by the government parties and senators. In November 2020, the Parliament passed only two bills creating the constituent assembly, sponsored by the government and the opposition parties, to the committee stage. The PPP and senators tried to filibuster the bills. In February 2021, only a week before the bills were due for their third and final reading, the PPP and senators gained parliamentary approval to apply for a Constitutional Court ruling on whether the Parliament had the power to form a constituent assembly.

The ‘Guardian of the Constitution’ Ruling

The Constitutional Court imposed a new condition – a mandatory referendum before drafting a new constitution.

Another constitutional issue is judicial intervention in parliamentary proceedings. The Constitutional Court is actively engaging in politics by delivering an ‘advisory decision’ concerning a constitutional amendment. It also imposed a new condition – a mandatory referendum before drafting a new constitution. This results in a ‘constitutional turf war’ between proponents and opponents of this additional referendum who also disagree on when the referendum should be held. While the opposition parties argue that the referendum should be held before establishing the constituent assembly, the PPP and senators contend that it should be held before introducing the bill to revise the amending provision that would allow the establishment of the constituent assembly. Nonetheless, after approximately four hours of debate, the bill to revise the amending provision in the Constitution to allow for the establishment of a constituent assembly failed when Parliament, controlled by the PPP and senators, did not obtain an overall majority vote.

The (Im)possibility of Making a New Democratic Constitution

To function as the supreme law of the land, stringent amendment requirements are a major characteristic of constitutions. Nevertheless, constitutions should be adaptable to political, economic, and social change, even though they require a certain degree of rigidity. The current deadlock in Thailand is caused in no small part by the 2017 Constitution, which created rigid amendment rules that allow the appointed senators to defend the current constitution, and perhaps amount to ‘constructive unamendability.’

In Thailand, sections 255 and 256 of the Constitution set forth three amendment rules. The first forbids changing the form of government from a unitary and constitutional monarchy. In addition to this ‘eternity clause,’ tough procedural amendment requirements vary according to the provisions. ‘General amendments’ to, for example, the electoral system, senatorial powers, and the local administration require three readings, and a simple legislative majority in the first two readings. For the first reading, at least one-third of appointed senators must be a part of the simple majority. In the last stage, aside from at least one-third of appointed senators’ approval, the simple majority must also comprise twenty percent approval of the total number of members of political parties in the House that do not hold ministerial offices, or the positions of Speaker, or Deputy Speaker of the House. Other “important” amendments – covering for example, the monarchy, amendment procedures, and duties and powers of independent state agencies and the judiciary – additionally require the approval of a majority of eligible voting citizens in a national referendum prior to submission for Royal assent.

Rigid amendment rules and the Constitutional Court’s ruling means that it seems practically impossible to replace the junta-backed constitution with a new democratic constitution.

On 23 June, while a bill to amend amendment rules and create the constituent assembly was rejected by the Speaker for being incompatible with the Constitutional Court’s decision delivered in March, thirteen section-by-section constitutional amendment bills were introduced into the Parliament for consideration. On the following day, twelve bills could not get a simple majority with at least one-third of appointed senators’ approval to pass the first reading. It is very interesting to note that one of these bills dismissed by appointed senators was presented by the PPP. The appointed senators disapproved of the PPP’s bill because it attempted to amend section 144 and 185 which, respectively, forbid Members of Parliament (MPs) from increasing the budget in the annual appropriations bill and forbid MPs from using their position to influence or interfere with official duties for personal or profession benefit. With senatorial approval, only one bill could pass the first reading. This bill proposed changing the electoral system in a way that would also support the PPP’s reelection.

Many people criticize that the section-by-section amendments by political parties seem to focus only on the electoral system. A reform of the electoral system cannot rebuild democracy in Thailand. A group of democratic proponents called “the Re-Solution” therefore launched a campaign to “overthrow Prayuth’s regime.” The campaign aims to submit a popular initiative signed by over 70,000 voters to the Parliament for constitutional change. The Re-Solution’s constitutional amendment bill proposes abolishing the Senate, reorganizing the Constitutional Court and independent agencies, revoking a national strategy formulated by the military government, and nullifying military-coup orders. A big question here is whether it is possible that the Parliament controlled by the PPP and appointed senators will approve this ‘citizen’s bill’ removing the junta regime from Thailand.

However, it is a fact that there is no perpetual constitution in the world. A constitution as a ‘social contract’ should be created to meet the needs of the people. With due caution, amendments should be possible, otherwise they may be made through unconstitutional means, and this is a warning sign of violence.