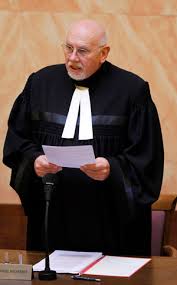 Constitutional Court's chairman Pavel Rychetsky (photo credit: Xinhua/Reuters)
<p align="justify">Constitutional Court's chairman Pavel Rychetsky staged support for the government-sponsored amendment to the constitution that would curb the power of the president to appoint the seven members of the CNB's policy setting Board. Currently all members are chosen by the president for a six-year term while the changes stipulate appointments would need co-approval by the Senate. It is logical that the president's power should not be absolute in case of such an important institution as the central bank, Rychetsky said in a TV programme on Sunday. At the same time he criticized the government's constitutional amendment draft as incomplete as it does not stipulate the establishment of a representative body of the judiciary like a supreme judicial council. </p>
Read the full article here: Central European Financial Observer