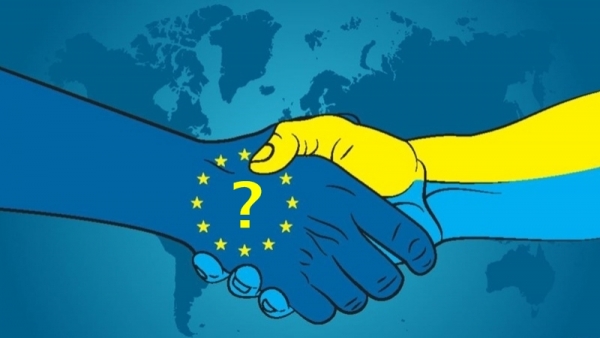 President Poroshenko has tabled a constitutional amendment bill that would specifically affirm the Euro-Atlantic course of Ukraine. Despite the connection of the reforms with the triggers of the 2014 Euromaidan revolution, the timing of the proposals may also serve short-term electoral calculations in view of the March 2019 presidential elections. Moreover, the proposals were not publicly discussed before their tabling and vaguely empower the presidency, an institution that has historically been abused – writes Julia Kyrychenko.

In autumn 2018, Ukrainian President Petro Poroshenko expressed his intention to entrench Ukraine’s aspiration to join the European Union (EU) and the North Atlantic Treaty Organization (NATO) in the Constitution. On 3 September 2018, the President tabled before Parliament Bill No 9037 on the strategic course of Ukraine to gain full-fledged membership in the EU and NATO. Symbolically, the amendment proposal may be linked to the 2014 Euromaidan revolution that was triggered by the retreat of then President Viktor Yanukovych from signing the association agreement with the EU, reportedly under pressure from Russia. The association agreement was the culmination of efforts of successive Ukrainian governments to seek closer ties with the EU. The aspiration for membership in the two organizations is also connected to a desire to protect Ukraine from potential further aggression from Russia. If the amendment is adopted, Ukraine will join the Baltic states, Czech Republic, Romania and more recently Georgia in giving constitutional affirmation to the European dream.

Process and politics of the proposed amendment

Unless the proposed amendment is finalized before the elections, there is no guarantee that the amendment will be a priority for the next president.

There may, however, be some uncertainties. The proposed amendments come at a time where presidential elections are scheduled to take place in March 2019. The timing of the proposed amendment may be intended to mobilize and shore up support among the pro-European voters in the elections. According to the recent public opinion polls, incumbent President Poroshenko is lagging behind other aspiring candidates in the presidential race, with former Prime Minster Julia Tymoshenko leading the race. While no group, other than the Opposition Bloc, is against the Euro-Atlantic course, Tymoshenko has not expressly declared support for the proposed amendments and is instead seeking to work towards a new constitution for Ukraine. There is no guarantee that the proposed constitutional amendment will be a priority for the next president. A change in the presidency may also influence the power dynamics in parliament, potentially scuttling the reform initiative.

Enshrining the Euro-Atlantic course of a state in the constitution is not a typical step, particularly under conditions when the actual process of joining EU does not depend on Ukraine’s desires alone and requires compliance with stringent membership admission procedures. However, the intentions of the move can be explained by its symbolic significance, historical developments, and the (perceived) enduring Russian threat. The proposed amendment may be seen as part of the strategy to secure and protect Ukraine’s independence through closer integration with Europe. Indeed, the move comes amid continued fighting between government forces and Russian-backed rebels in the east of the country. President Petro Poroshenko justified his initiative by stating that for the people of Ukraine ‘integration to EU and NATO is tantamount to ensuring the independence of our country’:

The military aggression of Russia has dramatically changed the internal and external security environment of Ukraine, and this makes it necessary for Ukraine to search for new mechanisms of ensuring its national security and to enshrine in its Basic Law that its civilization course of European and Euro-Atlantic integration is irreversible.

The President also indicated that, beyond the practical and security implications of joining the EU and NATO, the pivot towards Europe has broad popular support due to its potential implications in strengthening democracy, constitutionalism and the rule of law, emanating from ‘the European civilization identity of Ukraine, its close and lasting relations with members of the European and Euro-Atlantic communities based on common civilizational values’.

The proposed reforms seek to constitutionalize Ukrainian aspirations in the constitution and specifically empower parliament, the government and the president to pursue these goals.  Accordingly, the first proposal seeks to incorporate in the preamble a provision on the European identity of the Ukrainian people and on the irreversibility of the European and Euro-Atlantic course of Ukraine. To give effect to the aspirational language, the amendment would expressly empower and require parliament, the president and the cabinet to pursue the Euro-Atlantic course of the state. Specifically, parliament would be authorized to define the implementation of Ukraine’s strategic course to gain membership in the EU and NATO. The cabinet will ensure implementation of this course in accordance with the laws and policies to be adopted by parliament, while the president will oversee and guarantee the implementation of the relevant laws and policies.

The proposed amendment has not been subject to popular discussion and the Constitutional Commission was not involved in the preparation of the draft bill.

One of the proposed amendments is only indirectly related to Ukraine’s European aspirations. It seeks to remove from the Ukrainian Constitution the provision providing for use on a rental basis of existing military bases on the territory of Ukraine by foreign military units according to international agreements. This proposal is seen as directly targeting Russian bases in Ukraine.

Although arguments could be made regarding the desirability of constitutionally affirming Ukraine’s European pivot, the process through which the proposed amendment has been channeled and its timing are questionable. The amendment initiative is yet another reform proposal that the Head of State has prepared in a non-transparent, non-inclusive manner. There was no public discussion of the reform proposals. Both the expert community and the wider public were only able to access the details of the amendment bill once it was posted on the Parliament’s website. Notably, a Constitutional Commission, a presidential advisory body appointed through nominations from various actors, has been established to develop constitutional amendments. However, the Commission was involved neither in the development nor in the discussion of the amendment bill in relation to the EU and NATO aspirations of Ukraine.

In the presence of laws that already anticipate a similar policy orientation, the constitutionalization of the aspiration may unexpectedly constrain policy flexibility and narrow the options of current and future governments.

Secondly, beyond its symbolic importance, the significance and added value of the constitutional recognition of Ukraine’s Euro-Atlantic aspirations is not apparent. Although the explanatory memorandum to the draft law indicates the desire towards legislative consolidation and increased action towards the goal, under the current legal and constitutional framework, state authorities already enjoy  sufficient powers to make and implement foreign policy including the Euro-Atlantic course of the state. For example, this course is clearly stated in the Law ‘On National Security’ of June 2018, as well as amendments to the Law ‘On Principles of Internal and Foreign Policy’ adopted in March 2018 that specifically outlines ‘gaining membership’ in the EU and NATO as an objective. Accordingly, the constitutionalization of the aspiration may unexpectedly constrain policy flexibility and narrow the options of current and future governments, including the options within the parameters of the Euro-Atlantic course. The adoption of the amendment will make it difficult for any future government to adjust Ukraine’s foreign policy orientation taking into consideration fluid global and regional dynamics.

The timing of the proposed reforms, just a few months prior to the presidential elections, may also raise questions regarding the genuine significance and logic of the constitutionalization of the foreign policy orientation. The reform proposal could be a result of short-term electoral calculations rather than a genuine conviction and need to elevate a foreign policy issue, where flexibility may be key, to constitutional status. At the same time, it is possible that Poroshenko may be attempting to cement Ukraine’s Euro-Atlantic course to preclude a reversal of course by potential future pro-Russian leaders in case he is not reelected.

It is possible that Poroshenko may be attempting to cement Ukraine’s Euro-Atlantic course in case he is not reelected.

In terms of the content of the reform proposals, the identification of the president as a guarantor of the implementation of the strategic course to gain full-fledged membership in the EU and NATO raises concern. In conditions of post-Soviet countries where the office of the presidency tends to lean towards autocracy, such a vaguely formulated role of the Ukrainian President might be used for the unconstitutional expansion of his/her powers. There were indeed experiences in Ukraine’s constitutional history where defining the president’s role as a ‘guarantor’ was used by politicians to substantiate claims that the head of the state had some hidden, latent powers. For instance, President Viktor Yushchenko drew on such considerations for early termination of the Verkhovna Rada’s powers in 2007. A refinement of the exact role of the president in relation to the proposed amendment may therefore be necessary to avoid potential abuse of the mandate.

Overall, while the push to constitutionally reflect Ukraine’s European and Euro-Atlantic course is popular and could be connected to the preservation of Ukraine as an independent state, in a context of real and perceived Russian aggression, the actual drivers and timing of the proposed constitutional amendments may lie in the 2019 presidential elections.