Constitutionalizing the right to water through popular initiative in Slovenia 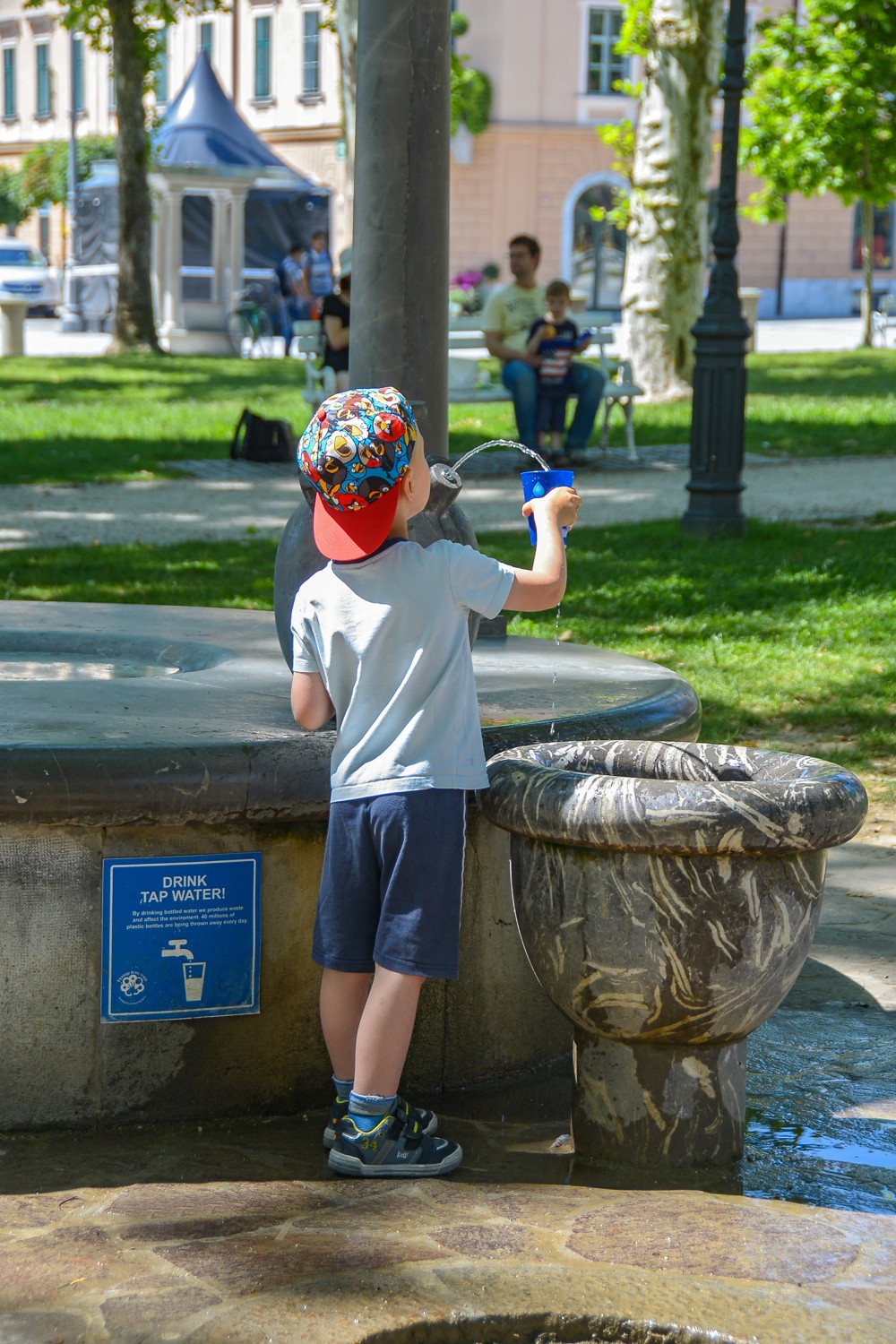 For the first time, the popular initiative has been relied on to guarantee a constitutional right to water. Considering the cross-party support, the proposed constitutional amendment is likely to succeed. The Slovenian experience demonstrates the potential of popular initiatives to enhance the constitutional protection of socio-economic rights and stem the tide of liberalization of public services – writes Špela Kunej.

‘Without taste, without color and without an owner – water is freedom’. This short ode, loosely rhyming in its original Slovenian version, is the slogan of a recent civil initiative that aims to achieve the introduction of a right to water into the Constitution of Slovenia. The initiative goes beyond a political campaign and relies on a constitutional provision which gives a certain number of voters the right to propose constitutional amendments. Water, an abundant natural resource in this tiny Central European country and ever present in its poetry and pop songs, became the subject of much public debate after some water sources became privatized in favor of domestic and foreign corporations, which already control more than half of Slovenia’s water sources. To pre-empt a possible deterioration of the public’s access to drinking water and to discourage or halt privatization, in particular by foreign companies, Slovenians wanted their access to water recognized as a constitutionally protected right.

The Slovenian Constitution has been amended several times. Nevertheless, the right to water petition is the first time the popular initiative has been employed to trigger the constitutional amendment process with a serious prospect of success. The Slovenian experience demonstrates the possibility where popular initiative can complement and give impetus to amendments that are either unpopular in parliament or not prioritized. It also demonstrates the potential of the popular initiative to guarantee socio-economic rights and to challenge the increasing drive towards the liberalization of public services.

The right to constitutional initiative

Slovenia, a constituent member of the former Socialist Federal Republic of Yugoslavia, gained independence in June 1991. The current Constitution – preceded by an interim arrangement that did little more than state that the Constitution of the Socialist Federal Republic of Yugoslavia no longer applied – was adopted in the same year. The Constitution establishes a democratic order and includes a fairly standard catalogue of human rights. One aspect of the Constitution, however, stands out. Various provisions elaborate a wide possibility of public participation in the legislative process. Accordingly, five thousand voters may propose laws for parliamentary adoption, while 40 thousand voters may request a referendum to reject the entry into force of a law adopted by the National Assembly. Moreover, proposed constitutional amendments must be submitted to a referendum if at least 30 deputies so request. The possibility of public participation in the legislative process has been infamously used by opponents of gay rights. In 2012, an entirely new Family Code was rejected at a referendum following a campaign by right-wing parties and the Church, who took issue primarily with new rights for gay persons. In 2015, an amendment to the Law on Marriage and Family Relations allowing for additional rights for gay couples and families was likewise rejected at a referendum following a similar campaign by the same actors.

In addition to these procedures, 30 thousand voters have the right to propose the initiation of a procedure to amend the Constitution (constitutional initiative). In contrast to legislative initiative, voters do not have a right to have members of the National Assembly actually vote on their proposed constitutional changes. Deputies must consider but can reject a proposal to initiate the procedure to amend the Constitution. A request to initiate the amendment procedure is carried if approved by two-third of the members of the National Assembly. Nevertheless, while legally possible, it might be politically unpalatable to reject a legitimate proposal of 30 thousand or more voters.

This constitutional possibility has provided the legal basis for the current public initiative concerning the right to water.  While the popular initiative procedure has been relied upon to reject ordinary laws, this is the first attempt where the procedure has been used to trigger the constitutional amendment procedure. The word ‘water’ does not appear in the Constitution of Slovenia. The provision currently applicable to its use and exploitation broadly regulates national assets and natural resources.  Over the years, several concessions to exploit natural resources have been acquired. The privatization drive received public attention when private companies acquired concessions to provide drinking water to certain local communities and even more when hitherto Slovenian-owned companies were taken over by global corporations.

Constitutionalizing the right to water

The first indication that the Slovenian public and its representatives wished to protect water in a different and more effective way came in March 2014 when a group of deputies initiated a constitutional amendment procedure. Due to early elections held in July that year, the initiative stalled. In May 2015, another group of deputies tabled an identical initiative. Within the constitutional commission of the National Assembly, the parliamentary body responsible for drafting constitutional amendments, an ad hoc group of experts was established to investigate whether a right concerning water could and should be included into the Constitution and, if so, what the wording of the amended/additional provision could be.

Until the end of 2015, the group did not produce any results, and the deputies’ initiative received strong backing in the form of a popular initiative:  ‘Petition for Slovenia and for freedom’. The initiative became available for public signature on 30 January 2016 and collected more than the required 30 thousand signatures in under six weeks. The first signatories of the civil initiative show that the initiative is in fact a popular citizens’ initiative. Few famous names appear and the initiative’s website emphasizes its autonomous and independent character. Its political neutrality notwithstanding, the civil initiative is backed by all parties in the governing coalition, as well as by some opposition parties. The latter are the Alliance of Socio-Liberal Democrats, whose president Mag. Alenka Bratušek was the Prime Minister when the first initiative was made from within her (now former) party, the United Left (Združena levica), which has been strongly in favor of the constitutional amendment, and the somehow reluctant New Slovenia (Nova Slovenija), a Christian right-wing party, traditionally not an ally of the left.

As the Petition gained momentum, on 9 March 2016, the ad hoc group published its opinion and concluded that the envisaged constitutional amendment was ‘pertinent/urgent’. One of the reasons links back to the public outrage that started water-related discussions in the first place. Among its reasons, the group stated that it expected that financial institutions and international corporations would pressure for ‘further liberalization’ of water supply in Slovenia, as well as other hitherto public services. To indicate that water was more than just another resource and that the liberal constitutional wording on the granting of concessions to exploit natural resources should not apply to it, it proposed to add a new provision. Also in the same month, the organizers of the ‘Petition for Slovenia and for freedom’ handed over the initiative to the National Assembly.

Based on the initiative’s demands and the ad hoc group’s findings, on 29 May 2016, the constitutional commission proposed a new constitutional provision guaranteeing the right to water and requiring the state to ensure the supply of drinking water to inhabitants and households through a not-for-profit public service.  On 15 July 2016, the National Assembly confirmed the initiative with 65 votes (out of 90) in favor, while 25 abstained. The deputies who were members of the Social Democratic Party (Slovenska demokratska stranka) abstained  on the ground that water is already sufficiently protected in the guarantee on the right to a healthy environment and out of concern that the amendment might compromise the right to private property. The party representative accused the governing coalition of demagoguery and of using instances of foreign ownership of Slovenian water sources to trigger the ‘socialist reflex’.

The last stage of the amendment process will be the development of a final text including transitional provisions by the constitutional commission, which will then be put before the National Assembly. Constitutional amendments are adopted if approved by a two-third majority in the Assembly. If the July vote is anything to go by, and considering the cross-party support to the proposal, the amendment is likely to be approved. Nevertheless, there is no clear indication as to when the amendments will be tabled before the National Assembly.

The adoption of the amendment will have significant practical implications. Currently, 16 (out of 212) local communities (municipalities and towns) have a private provider of drinking water. The constitutional amendment would make this unconstitutional. However, it is possible that a transitional period would allow the existing contracts to terminate on their agreed terms. While the use of water for private purposes will still be possible, the right to drinking water will take precedence. Private entities may still control some elements of the public water supply, such as sewage water treatment.

The Constitution of Slovenia has been amended nine times since it was adopted almost 25 years ago. The last constitutional amendment, rather than encouraging public participation in state affairs, limited the right to referendum by excluding referendums on several important matters, including laws on all taxes and legislation implementing the budget, as well as laws ratifying international treaties. This amendment, dating from 31 May 2013, which was an indirect consequence of Slovenia’s financial struggles at the peak of Europe’s financial crisis, generated stark criticism. Protesters and protest banners with ‘Let the people decide’ and similar slogans were frequently seen outside the National Assembly. In light of the developments in 2013, the current initiative is all the more inspiring as it reminds voters that they have a strong say and warns politicians that voters are aware of their rights and will make use of them.

Špela Kunej is a lawyer from Ljubljana, Slovenia, with an LL.M. in international humanitarian law and human rights. She lives and works in Heidelberg, Germany.

Adem Abebe 31 August 2016
Dear David, many thanks for the observations. Glad to read that you enjoyed the piece. Slovenia will become one of a handful of countries that specifically recognize the right to water, if the amendment is approved. An analysis of the benefits would require a comparative analysis. Nevertheless, it certainly informs a rights base approach to decisions touching on water resources. If you would like to receive regular updates on constitutional developments worldwide, you may subscribe to our Newsletter here: http://www.constitutionnet.org/dashboard Best, The Editor