Consolidating Democracy in Tanzania: Presidential Powers under the Proposed Constitution 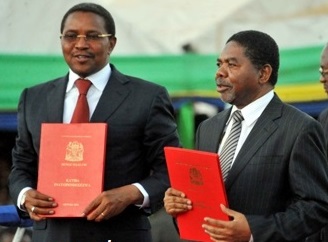 President Kikwete of Tanzania (on the left) with the proposed Constitution (photo credit: ippmedia.com)

Speaking of broad presidential powers under the Republican Constitution of 1962, Julius Nyerere, the first President of Tanzania wrote to the London Observer in 1963 that “[w]e cannot afford liberal checks and balances… Our constitution differs from the American system in that it enables the executive to function without being checked at every turn.” Nyerere spoke of his imperial presidency, where the executive, under the one party system, was virtually above all the other constitutional organs of the state and where fundamental freedoms were relegated to socialist objectives of economic development and building national unity. More than fifty years later, not much has changed. The legacy of an absolute presidency still constrains efforts to strengthen democracy and protect fundamental rights in Tanzania. Even though constitutional and political reforms in the 1990s instituted multiparty democracy and operationalised a constitutional bill of rights, proposals to curtail presidential powers were impossible to pass in the given political climate. As the constitutional review process of 2011 led to the adoption of the proposed constitution in October 2014, it is timely to reflect on the state of presidential power and its potential implications for democracy and fundamental freedoms in Tanzania.

When the constitutional review commission submitted the first draft constitution in December 2012, Tanzanians were optimistic that it would reflect people’s aspirations and also impose constraints on the disturbingly broad and hugely detested powers of the executive. Unfortunately, the proposed constitutional text outlines an equally strong executive at the risk of undermining parliamentary authority and judicial independence.

Under the proposed constitution, the President has powers to appoint 15 members of Parliament. Although it would be wrong to claim that President-appointed legislators are all puppets, it is equally true that there are no safeguards against appointing sympathizers and clienteles. Appointed legislators are not accountable to the electorate and could easily endorse objectionable government policies free from political repercussions in the next elections. Since their appointment and/or re-appointment could depend on the whims of the President, they will most likely act in his favour. The presidential appointment power further extends to board members of public parastatals, inquiry commissions, and other administrative or regulatory agencies that entail additional benefits for MPs – making the posts handy tools to build a patronage system with the possibility for the President to grant or to withdraw these posts to reward or discipline his clienteles.

Importantly, and in contradiction to the idea of separation of powers, both the 1977 and the proposed constitution require that the President appoint all of his ministers from among MPs. Upon appointment, there is no requirement for ministers to vacate their parliamentary seats. Although this institutional relationship could be instrumental in enabling close negotiations and communication between these branches, lack of sufficient restraints on executive appointment power can greatly weaken parliamentary check over governmental action. As people’s representatives, parliamentarians are expected to scrutinise and hold government accountable for its actions and decisions. MPs achieve this by participating in parliamentary debates and by questioning ministers in the parliament and before select committees. As executive members responsible for formulating and implementing government policy and defending its budget and actions in parliament, ministers would have less incentive to criticise the government, let alone vote against its proposals. This can happen due to party loyalties or fear of losing office. Indeed, under the proposed constitution, one must be a member of a political party to qualify for election as an MP. Under their constitutions, political parties have power to terminate the party membership of an MP, who consequently loses his/her parliamentary seat. Since President Kikwete is also the chairman of the ruling party, Chama Cha Mapinduzi (Party of Revolution), on top of his appointment powers in the cabinet he also has political influence over his party’s legislators outside the parliament. Cumulatively, and with such a large cabinet as the present, the support of party members along with President-appointed legislators allows the executive to theoretically secure enough votes to effectively circumvent parliamentary oversight.

Apart from appointing ministers and legislators, the presidential appointment power extends to the posts of Chief Justice as well as High Court and Supreme Court judges, the latter also subject to the President’s removal power. These are excessive powers to be vested in a single institution that is not obligated to take advice from the Prime Minister or any other authority. Although the President has no power to dismiss judges at will, President Kikwete has on a number of instances shown how (re-)appointing judges into executive positions can “remedy” his lack of removal power and effectively exempt executive action from judicial checks.

The constitutional framework centred on a strong executive presidency with Ministers appointed from among the MPs, essentially creates an overlap between the powers of the President and the Parliament. Politically, this weakens the position of the legislature to scrutinise government policies and to hold the government accountable for misuse of public resources or for the breach of individual rights. In recent years, the executive went as far as refusing to implement parliamentary resolutions, for instance, on the 2008 Richmond and 2014 Escrow corruption scandals. The President recently also approved a Bill that potentially violates civil liberties and cleared Ministers implicated in human rights violations. Despite the entrenched government practice to ignore parliamentary and inquiry commission resolutions, the proposed constitution appears to fall short of preventing arbitrary executive action.

Powers to oversee the legislative process

On the local level, the Parliament has often been perceived as a ‘rubber stamp’ to executive action and particularly so before attaining financial independence in 2007. The powers to dismiss elected representatives are extremely broad and contravene the basic tenets of democratic governance. Though indeed critical in a political deadlock, these powers increase the legislature’s vulnerability. Although in established democracies the threat of dissolution may have little impact on the behaviour and autonomy of the Parliament, the “law of anticipated reactions” will certainly come into play in Tanzania. Since the President would not actually need to exercise dissolution power for it to affect MPs, who would continuously adapt their behaviour in anticipation of this possibility anyways. With huge employment insecurity and often a lack of academic or professional background among parliamentarians, the possibility of dissolution can easily become a determining factor in legislative decision-making. This has often been the case, when Tanzanian legislators criticised the government’s budgetary, policy or legislative proposals only to endorse them later without reservations.

The proposed constitution leaves election related presidential powers similarly controversial. Currently, the National Electoral Commission has a mandate to supervise and coordinate voter registration, presidential and parliamentary elections, referenda, and voter education. Under the proposed constitution, the President appoints all the members and the Chair of the Commission along with the Director of Elections, the chief implementer and coordinator of all election related matters.

With direct executive control over electoral institutions, it is hardly surprising that the ruling party has won all presidential and parliamentary elections to date. The proposed electoral system implies further consequences for the erosion of democracy in Tanzania. Foremost, direct executive control over the Commission makes its autonomy and credibility questionable. There are no safeguards that would prevent a President seeking a second term from appointing Commission members, who will favour his re-election. Furthermore, a less autonomous Electoral Commission would inhibit electoral competition, as it may be organized to frustrate opposition support or government critics.

Allowing appointees to control voter registration, actual polling, and vote counting, runs the risk of adjusting electoral outcomes for the benefit of the reigning government. The biometric voter registration (BVR) system, launched in February 2015, is a case in point. The BVR was expected to be used in the constitutional referendum on April 30 and in the upcoming October 2015 general elections. Yet, despite the general election’s date being known for years, the government has not allocated enough funds to procure adequate BVR kits, conduct voter registration and provide education on the elections and on the overdue referendum. With general elections just five months away and without adequate funds, it is unclear how the Commission will manage to register 24 million eligible voters, recruit and train staff and provide voter education. With a relatively strong and coalesced political opposition, the forthcoming general elections are expected to be unusually competitive. In this context, the Electoral Commission’s deficiencies raise concerns of the fairness of the electoral process itself. The failure to register eligible voters because of limited time, partisan interests or flawed registration process will deprive millions of voters of their civic right to participate in electing their government. Further vulnerability of the electoral system became obvious after the local government elections in December 2014. Then, the government dismissed six heads of districts governments and suspended five others over election irregularities. Such dismissal highlights the influence that strong executive power can have on the durability of electoral institutions. In addition, while elections were indeed flawed in some respects, some opposition political parties questioned why most of the   penalised  officials were from districts where the opposition had won against the ruling party - giving the impression that officials  were punished for failing to manoeuvre elections to the advantage of the ruling party.

While the President should certainly not be entirely deprived of government appointment powers, he should not possess extensive personal and formal control of other governmental institutions at the risk of undermining their autonomy and effectiveness. Checks and balances are crucial to democratic stability and protecting fundamental rights. Excessive executive powers under the 1977 Tanzanian constitution have been among the most concerning issues identified in the constitutional review process. Yet, the proposed constitution preserves the status quo at the risk of weakening institutions that represent citizens and protect democratic freedoms. Constitutional review should strengthen democracy and the guarantee of fundamental rights and this cannot be achieved effectively without a constitutional system of adequate checks and balances among governmental institutions. To this end, assuming a successful referendum on the proposed constitution, there remains a need for citizens and their representatives to appeal for further constitutional changes that will entrench democracy, promote government effectiveness and accountability as well as guarantee the protection of fundamental rights.

Daniel Marari is a lawyer with a strong interest in human rights, criminal justice and constitutional law. Daniel has practiced in the criminal justice system in Tanzania. He is also a graduate of Lund University, Sweden and is currently studying for a Master’s degree in Global Political Studies.