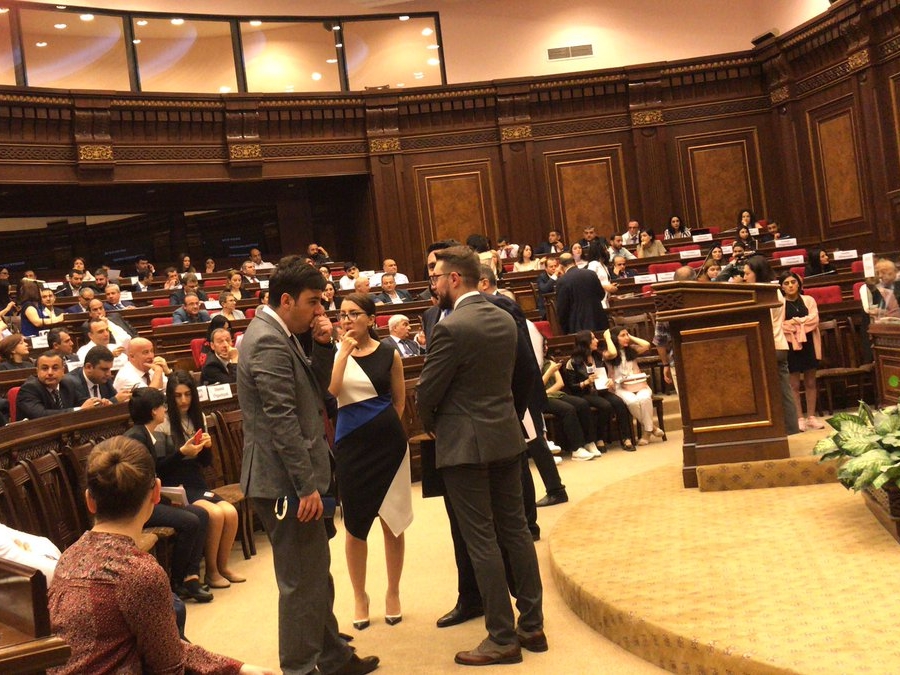 Armenia’s judiciary, largely structured and manned under the former regime, may be the target of vetting as part of a broader transitional justice initiative. The implementation of such processes may need constitutional reforms. The legitimacy and success of the reforms and vetting requires inclusivity and impartiality – writes Dr. Vasilyan.

One year on, the goals of Armenia’s Velvet Revolution, which reached its climax in May 2018, are deemed to have been only partially achieved. While the appointment of Nikol Pashinyan, the main flag-bearer of the revolution, as Prime Minister and the landslide legislative victory of the My Step coalition in the December 2018 elections marked a ‘face-lift’ of both the executive and legislative branches of government, the judicial branch has so far remained unscathed. Judicial vetting has therefore appeared as necessary to complete Armenia’s revolutionary transition.

Accountability for past injustices

One of the pledges of Nikol Pashinyan, then a member of parliament heading the public rallies, was to institute justice through, among other things, investigating the death of 10 people in a crackdown during protests in 2008 and the alleged toppling of the constitutional order by then president Robert Kocharyan. Pashinyan was one of the detained leaders following the demonstrations on charges of fuelling protests against the official results of the 2008 presidential elections in support of the losing candidate, former president Levon Ter-Petrosyan. He was initially sentenced to seven years in jail (subsequently shortened to three years and eleven months), but was released in 2011 (after two years) under an amnesty scheme granted by then president Serzh Sargsyan. However, back in spring 2018, Pashinyan assured that no vendettas will ensue.

Kocharyan has been facing possible prosecution for the 2008 killings and has been in pre-trial detention since July 2018. Nevertheless, he was released from pre-trial detention on bail on 18 May 2019. The judge suspended the trial and forwarded a request to the Constitutional Court to establish the constitutionality of the provision on overthrowing the constitutional order and the implications of presidential immunity. Kocharyan’s release drove a schism in the country. It also led to a live Facebook podcast by Pashinyan on 19 May calling on the populace to obstruct access to all court buildings on 20 May as a sign of discontent with the existing judicial system. The government subsequently framed the public outcry as civic support for the government’s initiatives. Pashinyan’s move was criticized by opposition groups as ‘unconstitutional’. It was perceived as an attempt by the executive to exert influence over the judiciary - something that Pashinyan has claimed to have refrained from – thereby impinging upon the democratic system of ‘separation of powers’ and the principle of ‘checks and balances’.

The prime minister considers vetting as an urgent mechanism to cleanse the judicial branch.

In the same podcast, Pashinyan made reference to vetting as an urgent mechanism to cleanse the judicial branch. Immersed in alleged corruption and clientelistic practices delivering biased and arbitrary verdicts under the command of the previous regime, the judiciary was stated to have lost public trust. More specifically, judges whose rulings were challenged at the European Court of Human Rights (ECHR) and adjudicated as violating fundamental rights, thereby becoming a liability for Armenia’s reputation and state budget, were to be targeted. The vetting process  would imply verifying the professional credentials, independence from political linkages and personal integrity of all existing judges (231 in total). In the meantime, Pashinyan suggested that conscientious judges and/or those not willing to undergo a screening by an independent commission - ostensibly to comprise a broad membership of legal, political and civil society representatives, as well as, possibly, international experts - should resign.

Referring to vetting processes in other countries (Africa, Latin America, ex-Yugoslavia, former Soviet Baltic states, Georgia and Ukraine),  some opposition politicians viewed the planned process as denigrating and politically motivated, while some experts regarded it long overdue. In the meantime, the ruling My Step coalition considers vetting an essential reform tool necessary to deliver on the promises of the Velvet Revolution to rid the country of all institutional malaises.

The implementation of vetting and broader legal reforms may necessitate constitutional amendments.

The talk of vetting has triggered a cascade of resignations. On 24 May, Gagik Harutyunyan, head of the Supreme Judicial Council, resigned (three Council members followed suit on 14 June), while his brother, Arzuman Harutyunyan, deputy head of the National Security Service, was fired. Nevertheless, to make the process more systematic, on 29 May, it was announced that the ruling coalition has prepared draft legislation and the opposition and civil society groups were encouraged to submit their suggestions.

Anchoring judicial vetting in the constitution

The implementation of vetting and broader legal reforms may necessitate constitutional amendments, partly because they may require the retroactive application of certain laws. At the parliamentary session on 30 May, deputies from the two main opposition Bright Armenia and Prosperous Armenia parties complained that the legislative draft on vetting had not been circulated, while insisting that the planned vetting commission had to consist of representatives of all parties.

The ruling coalition has the required majority in the National Assembly to adopt constitutional amendments.

Opposition to vetting has been based on perceived structural challenges that judges face, which is partly to blame for their lacklustre performance. For instance, there has been reference to the low salary of Armenian judges, which according to the Council of Europe report of 2018 ranges from €16,955 at the beginning of the career to €32,043 at the Supreme Court. Nevertheless, this is estimated to be ‘high’ since ‘at the beginning of the career judges earn more than 4 times the average salary and at the end of their career, more than 6 times the average salary’ and, therefore, should not serve as a pretext for accepting/demanding bribes. Another issue has been the heavy workload arguably inhibiting the physical ability of judges to allocate the necessary time to a single case leading to haphazard rulings, which are later reversed by the ECHR. In cases where there is room for more subjective judicial interpretation, a different finding by the ECHR does not necessarily imply corruption or incompetence. There are also concerns regarding the human resources available in the country to replace any outgoing judges, and especially since the Law Department of Yerevan State University has faced allegations since the early 1990s of recruiting students based on political and oligarchic ties.

If the ruling My Step coalition pushes the reforms forward, it has the required majority in the National Assembly to adopt constitutional amendments, as necessary.

Judicial vetting has emerged within a broader discourse on transitional justice. In August 2018, at a rally celebrating 100 days of the Velvet Revolution, Pashinyan mentioned the idea of establishing relevant bodies to pursue transitional justice, functionally defined by the International Center for Transitional Justice (ICTJ) as ‘rooted in accountability and redress for victims’ recognizing ‘their dignity as citizens and human beings’. Implying perpetration of injustice by the state, transitional justice is both retributive and reconciliatory. For a meaningful result, it should be (financially) restitutive and (morally) restorative.

Despite the announcements, the articulation and implementation of a transitional justice agenda in Armenia has been slow. Prior to the 20 May statement from Pashinyan, no tangible steps had been taken to find an acceptable Armenian ‘formula’ for implementation of transitional justice. Nonetheless, meetings have taken place with foreign experts from the ICTJ and the Justice Initiative of the Open Society Foundations in June 2018 and with the Zoryan Institute in partnership with the American University of Armenia in October 2018. The involvement especially of the Open Society Institute in Armenia’s transition through provision of grants has led to charges, especially by a newly formed social movement called VETO and a conservative nationalist Adekvad party, of encroachment on Armenia’s national interest and traditional values, and, thus, stirring anti-Soros protests.

Transitional justice had been originally associated in the mind of many Armenians with the recognition of the Armenian Genocide by Turkey. Therefore, the concept had to be re-configured and adapted to Armenia’s contemporary political context. With the targeted cases for transitional justice focused mainly on events around the 2008 protests and the illegal appropriation of houses on the current Northern Avenue – an arterial street in the centre of Yerevan - during the rule of Kocharyan in the 2000s, some of its possible measures mentioned by Pashinyan have involved freezing the assets of high-level officials abroad. An investigative committee comprising 11 members of parliament has also been formed in the National Assembly to scrutinize the four-day April 2016 war in Nagorno-Karabakh and held its first closed hearing on 4 June.

With its end-result aspired to be reconciliation rather than punishment, transitional justice re-gained momentum in tandem with judicial vetting in May 2019. The initiative has been controversial, due to the disputed retroactive applicability of laws. It therefore raises similar constitutional issues as judicial vetting and constitutional amendment may be necessary to give effect to it.

Transitional justice and vetting have gained traction as the Armenian government received a green light from the Venice Commission.

In any case, the effectiveness of the planned processes requires proportionality and impartiality. It is important to listen to all the possible voices – past and present governing regimes and opposition groups alike, as well as civil society and the broader public. Accordingly, any constitutional amendment enabling judicial vetting and transitional justice must put impartiality at its centre. In other words, injustices should not be rectified in an unjust manner.

Both transitional justice and vetting have gained traction as the Armenian government received a green light from the Venice Commission of the Council of Europe, and the European Union and its member states. The Venice Commission has endorsed the intended vetting, and the Council of Europe has promised to dispatch experts to support the country on the path of judicial reform in line with the Constitution. The EU Ambassador to Armenia recommended caution warning that the process of vetting is ‘sensitive’. Meanwhile, the Union committed to offering technical and financial assistance, and expressed willingness to transfer best-practices.

Overall, whereas May 2018 witnessed Armenia’s ‘(r)evolutionary breakthrough’, the May 2019 mayhem signalled that Armenia’s post-(r)evolutionary ‘boat’ is moving in the direction of a legal-political makeover, despite turbulences in the process of ‘navigation’. Unless designed and implemented wisely, both transitional justice and vetting may merely lay the seeds for a cyclic political and legal crisis, rather than systematically dismantling bottlenecks for democratic governance and the administration of justice.