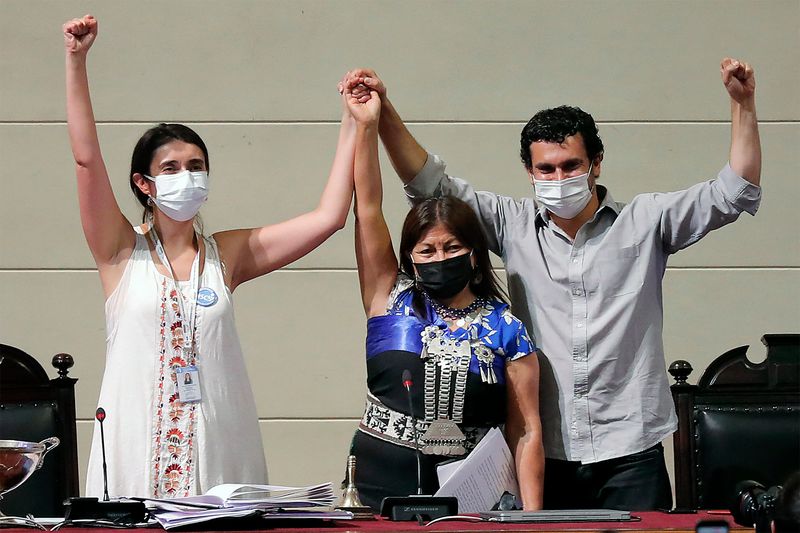 L-R: incoming president of the Constitutional Convention María Elisa Quinteros, outgoing president Elisa Loncón, and outgoing vice-president Jaime Bassa (photo credit: Javier Torres/AFP/Getty Images)
The Chilean assembly tasked with drafting a new constitution in the South American nation has elected a new president. After nine rounds of voting [...], members of the constitutional assembly chose epidemiologist Maria Elisa Quinteros to replace the body’s inaugural president, Indigenous Mapuche professor and activist Elisa Loncon. The change was provided for in the texts of the 155-member body, which was elected last year to draft the text to replace Chile’s previous Magna Carta, produced during the dictatorship of Augusto Pinochet. [...] Quinteros’s victory was welcomed [...] by Chile’s newly elected next president, Gabriel Boric. [...] The constitutional assembly has nine months, with a possible three-month extension, to draft the new constitution. It must then go to a referendum to be set up by Boric’s government, which takes office on March 11. [...] The new constitution is expected to usher in major changes for Chile, with environmental activists hoping it will bring new protections and Indigenous leaders saying they hope it will help establish a new relationship between their communities and the state.
Read the full article here: Al Jazeera