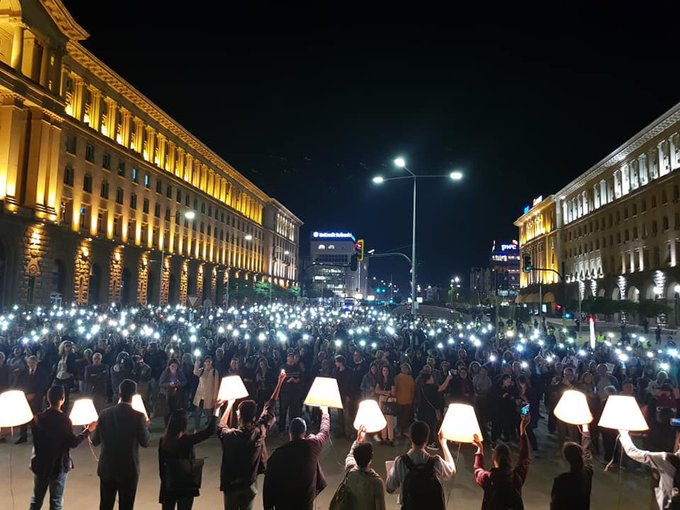 Controversies over the appointment of a new Prosecutor General have put constitutional amendments reforming the Supreme Judicial Council and prosecution services back on the political agenda. Success requires concerted pressure from the public, civil society and European influence – writes Professor Atanas Slavov.

In December 2019, the Bulgarian Cabinet submitted a request for constitutional interpretation to the Constitutional Court to clear the path for legal reforms towards establishing procedures for the investigation and accountability of the powerful Prosecutor General. This followed a presidential initiative launching public consultations on possible constitutional amendments on the composition of the Supreme Judicial Council and the structure and accountability of the Prosecutor General.

The reform drive has come in the wake of the controversial appointment of a new Prosecutor General in October 2019, triggering significant public discontent and unravelled continuing disagreements on the structure and composition of the Council and appointment and accountability of the Prosecutor General.

The debate is not new. In fact, the Supreme Judicial Council was most recently reformed in 2015. Nevertheless, the outcome of the reform constituted a compromise that was unsatisfactory to many stakeholders.

The Bulgarian judiciary suffers from lack of independence, weak accountability mechanisms and low public trust. Despite the recognition of the challenges, the reforms so far have been incomplete and deficient under accepted European standards. The situation has not improved significantly, notwithstanding specific monitoring mechanism in the fields of judicial reform and corruption under the auspices of the European Commission.

The controversies and reform initiatives focus on two key issues: balancing judges’ professionalism and impartiality with the need for public accountability, and implementing a trustworthy accountability mechanism regarding the Prosecutor General. The first relates to the unfinished structural reform of the Supreme Judicial Council, while the latter specifically targets the overcentralized Public Prosecution Office. In 2017, the Venice Commission noted that ‘it is unclear who may hold the PG[Prosecutor General] accountable’, a ‘paradox’ previously identified by the Parliamentary Assembly of the Council of Europe.

Several legislative alternatives, including constitutional amendments, are under consideration. Despite recognition of need for reforms, political and public consensus has been elusive. Achieving the required qualified legislative majority for constitutional changes in the context of fragmented political process and entrenched political and oligarchic interests in the current judicial system continues to scuttle reform initiatives.

Deficiencies in the composition of the Council

After the 2015 constitutional changes, the Supreme Judicial Council is divided into two professional chambers: one for prosecutors and one for judges. This structural reform was advised by the Venice Commission, considering that ambitious structural reforms would have required more difficult process of constitutional change via a specially convened constitutional assembly (Grand National Assembly). The Judges’ Chamber has 14 members: the two Presidents of the Supreme Courts as ex officio members, six judges directly elected by all judges, and six members elected by the National Assembly with a two-thirds majority. The Prosecutors’ Chamber has 11 members: the Prosecutor General as ex officio member, one representative of investigators, four prosecutors directly elected by all prosecutors, and five members elected by the National Assembly with a two-thirds majority. All members of the Council, other than the ex officio members, should be practicing lawyers of high professional and moral integrity with at least 15 years of experience. In practice, despite the supermajority and competency requirements, appointments to the Council are often heavily politicised and result in selection of party loyalists, rather than recognized independent experts.

Representatives of prosecutors, who are more prone to political influence, participate in the appointment of the highest judges.

The plenary of the Council selects the Prosecutor General and Supreme Court Presidents. Given their size, the parliamentary appointees significantly influence the process. During the 2015 constitutional amendment process, the ratio of professional to parliamentary quota was one of the most debated issues, that ultimately triggered the resignation of the then Minister of Justice Hristo Ivanov.

In practice, on most controversial decisions, representatives of prosecutors often side with the political appointees in the Council, which could partly be explained by the influence of the Prosecutor General, who determines their fate in the prosecution service. Thus, with directly elected judges constituting a minority, there is no guarantee for judicial independence and key appointments will continue to raise doubts of politicisation.

The selection of the two Supreme Court presidents by the judges’ chamber alone could reduce political influence.

This structure of the Council fails to meet established European standards on the administration of judicial councils. The Venice Commission has recommended that the majority of the members of the council (or judges’ chamber) be judges directly elected by their peers. The rebalance could be achieved by increasing the proportion of judges elected by their colleagues, or reducing the number of political appointees. The selection of the two Supreme Court presidents by the judges’ chamber alone could also reduce political influence.

Appointments to the presidency of the Supreme Courts have gone to close allies of ruling party.

The two appointments have resulted in the selection of candidates who are considered by the wider public to be close to the governing majority. These outcomes have refueled the debate on how to balance public expectations of professionalism and integrity of nominees with selection procedures that involve some degree of politicisation.

The Prosecutor General sits atop the pyramid of power in the over-centralized and hierarchical Prosecution Office. The extensive powers of the office are largely unchecked with no avenue for effective accountability and investigation in cases of abuse of power.  Part of the problem is the historical and political legacy of the Prosecution Office, which was used during past totalitarian regimes as a politicized and repressive entity.

There is no procedure to remove the Prosecutor General.

This institutional position makes it virtually impossible to provide real accountability and, in cases of serious breach of public ethics and the law, to trigger effective investigation and dismissal procedures. For that reason, changes in the composition of the Supreme Judicial Council by increasing the ratio of representatives of the public in the prosecutors’ chamber, reducing the duration of the term of office of the Prosecutor General from seven to five years, as well as providing independent mechanisms for investigation and dismissal of the Prosecutor General are among the first possible steps.

Suggestions for new process of appointment and removal of Prosecutor General have emerged.

More ambitious constitutional reforms may lead to the creation of a separate Prosecutors’ Council, not headed by the Prosecutor General, appointment of the Prosecutor General by Parliament on the proposal of the Minister of Justice, and introducing a form of impeachment procedure through Parliament, subject to review by the Constitutional Court. While parliamentary appointment could exacerbate politicisation, it would be open the process for public scrutiny and create direct political accountability for the appointment. The current process allows political influence in disguise and without accountability.

Shortly after the appointment of the new Prosecutor General, the President, who is not formally affiliated with any political party, announced the beginning of public consultations regarding possible constitutional amendments. As head of state with direct democratic legitimacy, the move has been considered timely.

Among the subjects discussed so far during the consultations with representatives of academic, professional and civic organizations are the structure of the Supreme Judicial Council, the constitutional status of the prosecution, and mechanismd to hold the Prosecutor General accountable, including effective investigation and dismissal from office.

The ruling coalition does not support any significant reform proposals.

The ruling center-right and national-populist parliamentary majority were behind the flawed 2015 reforms and do not support changes to the Council and Prosecutor General. The proposed reforms are likely to receive support from the main opposition party in parliament (socialists), extra-parliamentarian liberal opposition, well recognized civil society organisations, and judges’ professional associations. Intensified public pressure, backed by external European Union influence, may change the balance in favor of the proposals.

Thirty years after formal transition to democracy, Bulgaria is yet to complete key institutional reforms. In particular, retaining political influence in the judiciary and the prosecution is still considered by governing elites as leverage for preserving and distributing political and economic power. Reforms to implement specific recommendations regarding the structure of the Supreme Judicial Council and the status of the Prosecutor General, enhancing independence of the former and accountability of the latter, therefore continue to face resistance. The President will likely pursue his constitutional initiative, but the final decision rests with the National Assembly. Improvements in the rule of law and democracy standards in Bulgaria require fixing the problems in the judiciary. This is unlikely to happen without domestic civic engagement and effective external pressure.

Dr. Atanas Slavov is Associate Professor of Constitutional Law and Government at Sofia University, Bulgaria, and attorney-at-law. He was advisor on constitutional reform of the judiciary to the Minister of Justice (2014-2015).