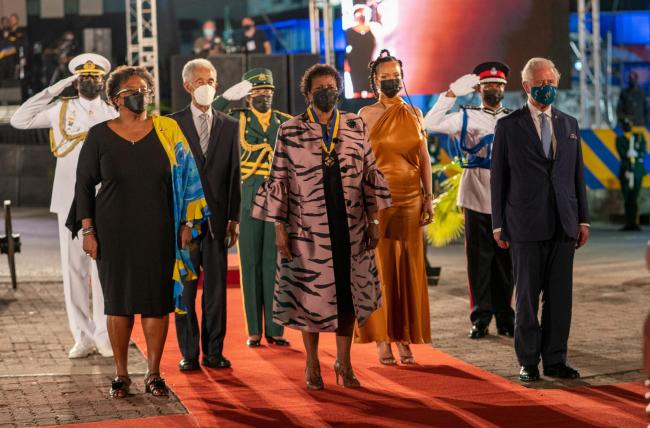 Left to right: Barbados' prime minister Mia Mottley, former cricketer Garfield Sobers, new president Sandra Mason, singer Rihanna and Prince Charles (photo credit: The National)
After nearly 400 years of British rule, much talk, and several administrations later, Barbados has completely cut its ties with Queen Elizabeth II and the monarchy.  As the clock struck midnight, the island transitioned from having the Queen as Head of State to a parliamentary republic with Her Excellency the Most Honourable Dame Sandra Mason - the island's first president at the helm. [...] During her first address to Barbados as a republic, President Mason highlighted the importance of drawing of the lessons garnered throughout the island's 55 years of Independence and pushed that as the country advances on this new path of republicanism, it should underscore the importance of nation-building. [...] Prime Minister Mia Amor Mottley, Chief Justice Patterson Cheltenham,  Attorney General Dale Marshall, Chief of Staff of the Barbados Defence Force (BDF) Commodore Errington Shurland, and Commissioner of Police Richard Boyce, took the oath to of allegiance to Barbados "according to law", instead of to the "Queen, her heirs and successors". [...] Barbados' name will remain Barbados and not The Republic of Barbados.
Read the full article here: Loop News