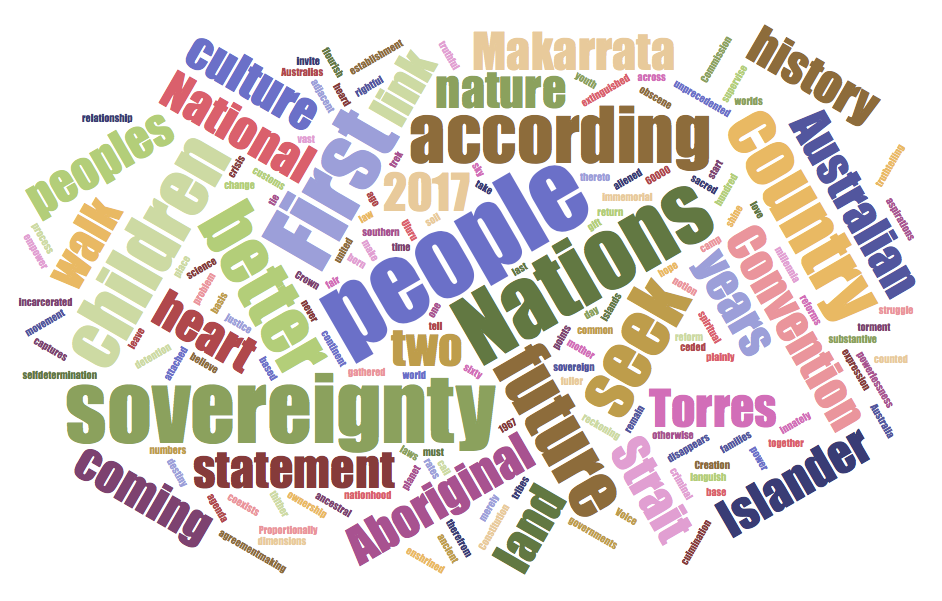 The Indigenous Constitutional Convention at Uluru in Australia suggests a more promising basis for relations between Indigenous Australians and the Australian state. The process that led to Uluru also offers insights for constitution building more generally – writes Professor Cheryl Saunders.

For much of the present decade, debate has been underway in Australia on whether and, if so, how, Indigenous Australians should be ‘recognised’ in the Australian Constitution. On 26 May 2017, in response to this debate, a First Nations National Constitutional Convention concluded its meeting at Uluru with a ‘Statement from the Heart’.

The Statement is powerful and moving and needs to be read in full to grasp its meaning. In brief, however, it argues for ‘substantive constitutional change and structural reform’ built around three pillars: a ‘First Nations Voice’, with a foothold in the Constitution; a ‘Makarrata Commission’ to supervise agreement-making between governments and First Nations; and a process of truth-telling about the past.

It would be possible to write a piece comparing these proposals for change in Australia with the position of Indigenous peoples in constitutional systems elsewhere. Like, for example, the United States, Canada and New Zealand, Australia has an Indigenous population with distinct cultures and languages and ancestral ties to the land. Research suggests that the ancestors of Indigenous Australians inhabited the territory for around 60,000 years, making this the oldest continuing civilisation on earth. In numerical terms, however, the Indigenous population is small, at around 3 percent of the Australian population as a whole, with no hope of substantially influencing political outcomes through the ordinary processes of majoritarian democracy.

Australia is relatively unusual in comparative terms; not least because the colonisers, who arrived from 1788 claiming sovereignty, entered into no treaties of any kinds with the multitude of Indigenous groups whose ancestors had inhabited the country for 60,000 years. However inadequate the compliance with Indigenous treaties elsewhere, their absence in Australia meant that there was, effectively, no recognition at all of the legal interests of Indigenous peoples in the introduced legal system. Indigenous peoples were forcibly dispossessed, their ways of life destroyed, and their population was substantially decimated.  At the same time, however, the absence of treaty meant that there was no surrender of sovereignty, the ‘ancestral tie between the land…and the peoples’, on the part of the First Nations. This is a central tenet on which the Uluru Statement is based.

This piece, however, focusses on process rather than substance. My aim is to examine the events that led to Uluru in the light of global experience with Constitution-building. There are lessons that can be drawn from the debate on constitutional recognition in Australia about the need to acknowledge and find a way to bridge different underlying perspectives on constitutional questions in divided societies and about the importance of inclusiveness and trust in designing deliberative procedures.  Equally, however, it is possible to see how, for example, global understanding of the importance of process and of the ways in which principles might provide building blocks for substantive outcomes are reflected in the latest Australian developments.

The winding road to Uluru

The background to the current debate on constitutional recognition can be summarised briefly. There is no reference to the Aboriginal and Torres Strait Islander peoples in the Australian Constitution as it presently stands. Discriminatory references dating from the time of federation in 1901 were removed through constitutional change in 1967. This was a remarkable event; constitutional change in Australia is difficult, involving approval both by the Parliament and at referendum and the Aboriginals proposal in 1967 attracted historically high levels of support. One effect of these changes was to enable the Commonwealth Parliament to make laws with respect to Indigenous peoples pursuant a general power to legislate for ‘the people of any race for whom it is deemed necessary to make special laws’ (sec 51(xxvi)).

The idea that the Constitution should be amended again to ‘recognise’ Indigenous Australians has multiple sources. It began to assume its current profile on the Australian political agenda during an election campaign in 2007, when Prime Minister Howard proposed a referendum to recognise Indigenous peoples in a preamble to the Constitution, in the interests of reconciliation. Howard lost the election, but instability in the Parliament caused the idea of constitutional recognition to be taken up again in 2011 by Prime Minister Gillard, pursuant to a power-sharing agreement with the Greens and independents. Gillard appointed an ‘Expert Panel’ to identify options for constitutional change, but ultimately postponed action on its recommendations, in the face of concern that a referendum might fail. Following another change of government, in late 2013, a parliamentary Joint Select Committee on Constitutional Recognition of Constitutional and Torres Strait Islander Peoples was appointed to report on steps that might be taken towards a successful referendum on recognition. That Committee canvassed and refined the options identified by the Expert Panel in addition to another, proposed by the Cape York Institute, for an Indigenous Advisory Body to Parliament, of which more below. In December 2015, yet another Prime Minister and the Leader of the Opposition appointed a Referendum Council to conduct national consultations and to advise them on the ‘next steps towards a successful referendum’.

All of these processes were relatively inclusive in terms of both composition and consultation. Both the Expert Panel and the Referendum Council had – and in the case of the Council still have - an equal number of Indigenous and non-Indigenous members, with Indigenous and non-Indigenous co-chairs. The Chair and Deputy Chair of the Parliamentary Joint Select Committee comprised the only Indigenous Members of the Parliament.  Both the Expert Panel and the Parliamentary Committee held consultations or hearings in many different parts of the country and received hundreds of submissions. From 2011, in addition, a Recognise Campaign, under the auspices of Reconciliation Australia, sought to raise awareness of the issues and to garner support for a referendum.

A now familiar range of substantive options for change emerged from these successive processes. While precise details have varied, these comprise:

A proposal by the Expert Panel for specific recognition of Indigenous languages was abandoned by the parliamentary committee. The Cape York proposal for an Indigenous advisory ‘Voice’ to Parliament, required by the Constitution but established by supporting legislation, gained currency from the latter stages of the parliamentary committee deliberations.

What does ‘recognition’ involve?

With hindsight, the process suffered from a lack of focus from the start. Initially, at least, it was assumed that recognition was intended to promote reconciliation. Throughout, it was accepted that recognition needed to ‘accord with the wishes’ of the Indigenous peoples. At the same time, however, the relevance of the views of Indigenous peoples was consistently tempered by consideration of what was likely to be acceptable to other Australians, both because of the difficulty of getting a referendum passed and because of differences within political ranks. In these circumstances, ‘recognition’ became associated with symbolic acknowledgement of some kind, with little consideration of whether and if so why this would be welcomed by those being recognised. Inclusion of a non-discrimination clause was assumed to be a step too far for the Parliament, which might also fail at referendum. The Cape York proposal for an Indigenous advisory ‘Voice’ to Parliament was an attempt to bridge this gap, identifying a change that could make a substantive difference to the relationship of Indigenous peoples to the Australian state, and that also fitted the institutional character of the Australian Constitution and thus might be acceptable to those on the right of politics.

A degree of Indigenous opposition to symbolic recognition was evident from the start. It began to have a substantive impact on the recognition process when, in early 2016, discussions between Indigenous groups in Victoria and the Government of Victoria led to agreement on a State-wide treaty process in lieu of or in addition to constitutional recognition. As the debate on treaties gathered speed, also spreading to South Australia in 2017, the Referendum Council put in place a deliberative process for Indigenous Australians to consider whether and, if so, how, they should be recognised in the Constitution. The process involved 12 Indigenous Regional Dialogues, in different parts of the country. Each comprised around 100 participants, drawn from traditional owner groups, community organisations and ‘key individuals’. Each Dialogue met over 2-3 days, in a format that encouraged deliberation and the formation of broad agreement, to consider the idea of recognition and the main options on the table and to rank the latter in order of priority.

The results of each of the Dialogues were fed into the deliberations of the First Nations Convention at Uluru. Around 250 delegates attended the Convention, most of whom had participated in one or more Dialogues.  The Convention debated the issues before it in the light of 10 guiding principles, distilled from Dialogue discussions.  The first two were telling: no diminution of sovereignty and ‘substantive, structural reform’. The Statement from the Heart was adopted by the Convention with a standing ovation.

The formal process from here is as follows. The Referendum Council is required to report to political leaders by 30 June 2017. The leaders will need to decide how to respond. Already there are signs of divisions – possibly deep divisions – in government ranks within the Parliament. The outcome will depend on how much support can be garnered from outside, including from opinion leaders on the right of politics, who earlier had expressed support for the idea of a Voice to Parliament. In the meantime, the Uluru Convention has appointed a working group, representing all the Dialogue regions and established a time line for action. Key events include a meeting of all Uluru signatories at the Garma Festival in Arnhem Land in early August at which, it is also hoped, key political leaders will be present and prepared to settle a ‘Makarrata Roadmap’.  Whatever happens in the lead-up to Garma or after it, however, the Uluru Convention has been a seminal event in Australian constitutional self-understanding. The opportunity for Indigenous peoples from across the country to express a collective voice about the relationship with the Australian state was unprecedented. The opportunity was seized, admirably and to great effect. The Statement from the Heart provides an essential building block for whatever happens next.

Cheryl Saunders is professor emeritus of public law at The Melbourne Law School, and co-convener of the Constitution Transformation Network.