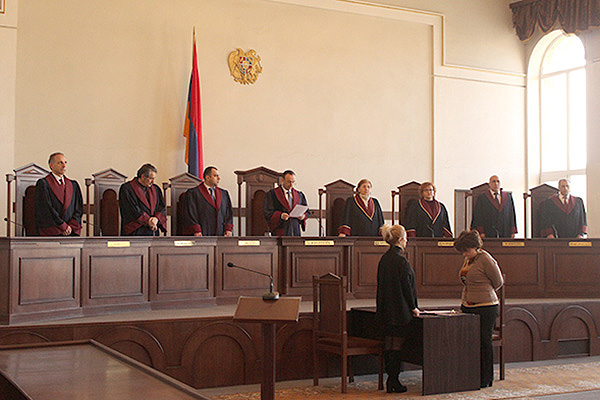 Judges of the Constitutional Court of Armenia (photo credit: The Court)

On 26 June 2020, Armenian Prime Minister Nikol Pashinyan announced the entry into force of constitutional amendments shortening the terms of some judges of the Constitutional Court and paving the way for the selection of a new Court Chair. The National Assembly adopted the law on constitutional amendments on 22 June, following another law on 1 June discarding a planned referendum due to the COVID-19 pandemic on related amendments that would have forced the resignation of several judges. The amendments represent the latest government effort to reshuffle the highest court, and considerations to ultimately transfer the functions of the Constitutional Court, as an undesirable remnant of the pre-Velvet Revolution of April 2018, to a potentially new unified Supreme Court or a Highest Judicial Authority.

The proposed constitutional referendum would have immediately ended the terms of seven judges of the Constitutional Court. The latest amendments specifically circumscribe the mandate of the Court to reviewing the compatibility of constitutional amendments only with reference to unamendable provisions, within 15 days of receiving draft amendments.

Crucially, the amendments demote the current Chair of the Constitutional Court and terminate the services of three judges who have served 12-years, the term stipulated for judges appointed following the entry into force of the 2015 Constitution. The Constitution included a transitional provision establishing an exception to judges appointed prior to its adoption allowing them to serve until retirement, rather than the 12-year term established for newly appointed judges.

Under the amendments, the current Chair of the Constitutional Court Hrayr Tovmasyan would step down but will remain a judge for another ten years. The terms of two of the targeted three judges – Hrant Nazaryan and Felix Tokhyan – who have served more than 24 and 22 years, respectively, would be terminated. The third judge – Alvina Gyulumyan – has also served more than 12 years, but has contested the counting of a hiatus during her service as a judge in the European Court of Human Rights (ECHR).

The latest amendments were supported almost exclusively by members of the ruling My Step Alliance, alongside one independent member of parliament, and come amid a state of emergency, which is expected to last at least until 12 August.

The President will no longer have authority to sign draft constitutional amendments.

Another legislative reform package accompanying the constitutional amendments was adopted on 30 June giving effect to the constitutional amendments shortening the terms members of the Court appointed prior to the entry into force of the 2015 amendments. The President of the Republic declared that he will not sign the law, nor will he forward it to the Constitutional Court, which was viewed as a political choice by the President to avoid ‘responsibility’. Under the Constitution, if the President does not do so within a period of 21 days, the Speaker of the National Assembly can sign it within five days thereafter. This was done on July 22.

The tussle between the Armenian government and the Constitutional Court may not be over just yet. Two of judges have stated their intention to challenge the amendment as a violation of their rights. Judge Glyulumyan also indicated that she would appeal to the ECHR, whose jurisprudence offers a level of protection against undue judicial termination. The Chair of the Constitutional Court left for vacation a day before the entry into force of the amendments.

The two main opposition parties, Prosperous Armenia and Bright Armenia, refused to participate in the amendment process. Prosperous Armenia’s opposition also emanates from the alleged ‘political prosecution’ of its leader Gagik Tsarukyan, an oligarch in the pre-Velvet Revolution period who has been critical of the ruling party and called for its resignation. Following his branding by Prime Minister Pashinyan as a ‘big entrepreneur’,  Tsarukyan is being investigated for charges of vote buying during the 2017 election campaign. The National Assembly removed Tsarukyan’s immunity through a secret ballot.

The ECHR refused to issue an interim order suspending the amendments.

Prosperous Armenia has also filed a lawsuit with the Constitutional Court, including on the ground that according to Article 168 of the Constitution the amendments must be approved by the Court before they come into effect. Nevertheless, the suit is supported by 26 members of parliament, a number that is arguably lower than the one-fifth requirement in a parliament constituting 132 MPs, thus amounting to 26,4.

This challenge could be addressed if Bright Armenia party joined the suit. Although the party has penned a statement alleging the same unconstitutionality of the adopted law,  it is awaiting the judgement of the Constitutional Court over the case of former President Kocharyan who is facing charges of toppling the constitutional order back in 2008. He is currently out on bail and a decision was expected on July 7, but did not occur due to a missing a quorum of five judges.

On 8 July 2020, the ECHR refused to issue an interim measure to freeze the enforcement of the amendments in a case filed by the four judges of the Constitutional Court. The Court ruled that the case ‘did not involve a risk of serious and irreparable harm of a core right under the European Convention on Human Rights’. The full complaint is to be lodged with the ECHR by 28 August 2020.

Opposition groups have argued that the government and the ruling My Step Alliance are seeking to use the amendment process to appoint loyalists to secure a decisive majority in the Court, which will ensure a friendly Court for possible controversial reforms. Nevertheless, Vahe Grigoryan – one of the two judges appointed after the 2018 change of government, but who has not been attending Court sessions for more than a year, dismissed the argument on the ground that new candidates who will replace the ousted judges are to be nominated by the government, the President and the General Council of Judges each, and this will render a ‘balanced’ composition.

Ashot Khachatryan, who would become Acting President of the Court in case of vacancy, has resisted calls from the Speaker of parliament to take over, instead insisting that before assuming this capacity on the grounds of seniority, individual legal acts relating the removal of the current Chair of the Court and the three judges should be finalised.

If the ongoing challenges to the amendments fail or are rejected, the new nominations are to take place within a period of two months of the entry into force of the amendments and the judges are to be appointed within ten days thereafter. The newly constituted court will then elect a Chair.

Ambivalence towards the Venice Commission

Opposition groups continue to criticize the amendments and the failure of the government and the ruling My Step Alliance to consider the observations of the Venice Commission. The European People’s Party (EPP) – of which the former ruling Republican Party of Armenia (RPA) is an observer since 2012 – has also expressed regret that the amendments disregard the Commission’s recommendations.

The Venice Commission has advised against judges’ ‘immediate removal from office’.

The Venice Commission emphasized the importance of respect for current constitutional rules, which require ‘the mandatory and systematic review’ of all draft constitutional amendments, while also urging the Court to ‘use extensive self-restraint in order to avoid any impression of favouring the personal interest of the judges when reviewing amendments concerning the Court itself’. The Commission also noted provisions on recusal of judges if there is direct and unavoidable conflict of interest.

Although the Venice Commission found the decision of the National Assembly to cancel the referendum agreeable and asserted the ‘legitimacy’ of the ‘authorities’ objective’ to activate the provisions of the 2015 Constitution, it recommended a ‘transitional period’ for ‘gradual change in the composition of the Court’. The Commission left it to the domestic authorities to determine the appropriate length of such a transitional period. It warned that ‘immediate removal from office’ does ‘not comply with the principle of irremovability of judges’ and expressed regret that the ‘proposal for constitutional amendments was introduced in the Armenian Parliament on the day of the adoption by the Venice Commission’ of the Opinion. The Secretary General of the Council of Europe reiterated the same, calling on the Armenian authorities ‘to be guided’ by those recommendations. Nevertheless, the amendments as adopted will lead to the immediate termination of the position of three of the four judges who have served more than 12 years.

Despite the fluctuating political decisions and controversial legal manoeuvres and criticism from opposition parties and opinions of the Venice Commission, the government will not change the course and submit the amendments to the Court for review, as the Prime Minister has already announced their entry into force.

Parallel to the amendments, Armenia is pursuing comprehensive constitutional reforms spearheaded by a constitutional reform commission established and appointed by the Prime Minister. One of the major changes under consideration is the creation of a Supreme Court, which will combine the functions of the Constitutional Court and the Court of Cassation.

The reform process is reportedly planned to finalise the changes in 2020 and put a new constitution to a referendum in 2021. In view of the criticisms relating the ongoing amendments, the executive is walking a tight rope. Domestic forces, including the Armenian public, and international bodies are closely monitoring the developments. Thus, good judgement is pivotal for constitutionalism and for bringing to a close the cycle of politicized constitutional reforms.