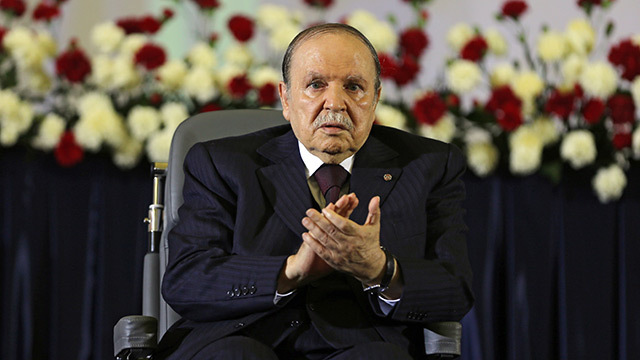 Algerian President Abdelaziz Bouteflika, re-elected for a fourth mandate, during his oath of office in Algiers, Algeria, 28 April 2014. (Photo credit: EPA)
<p>Algerian President Abdelaziz Bouteflika has approved a long-awaited constitutional reform package, state media reported, part of measures he pledged after taking office for a fourth term last year.&nbsp;<span style="line-height: 20.4px;">The draft constititional revision, approved at a "restricted" cabinet meeting late on Monday, will be submitted for final approval next month to parliament, where Bouteflika's allies have an overwhelmimg majority.&nbsp;</span><span style="line-height: 20.4px;">Bouteflika, who had a stroke in 2013 and has not been seen in public since the election, promised reforms to strengthen democracy in Algeria, which has been controlled largely by the FLN party and the military since it won independence in 1962.</span></p>
Read the full article here: Reuters