An agenda for constitutional reform in Democratic Republic of Congo (DRC) 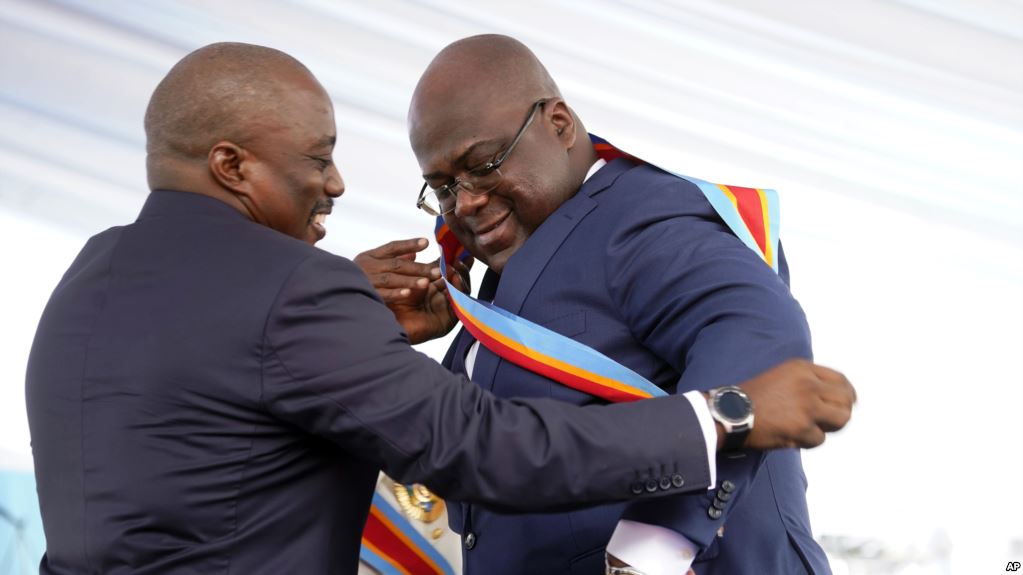 For the first time in its independent history, the DRC has witnessed a peaceful transfer of power through elections. This change opens an unprecedented opportunity to engage in crucial constitutional reforms involving decentralisation, presidential elections, the judiciary, the electoral commission, as well as enhance the role of the people in such processes. Public support for the proposed reforms and the potential incentives for pro-Kabila parties, which dominate the legislature, could make the reforms a reality – writes Trésor M. Makunya.

On 24 January 2019, Félix Tshisekedi was sworn-in as the fifth Head of State of the Democratic Republic of Congo (DRC) replacing long-standing president Joseph Kabila and breaking with a culture of violent overthrow of incumbents  and elongation of presidential terms. The swearing in followed the decision of the Constitutional Court rejecting the case challenging the outcomes of the election by Martin Fayulu, the runner up.

The change in the presidency sets hopes for constitutional reforms to strengthen the country’s democratisation process. Joseph Kabila had to step down because of presidential term limits and his handpicked successor came a distant third in the elections. Despite his loss, however, pro-Kabila parties won 355 of the 500 seats in the National Assembly, enabling Kabila and his party to determine who becomes the next prime minister, a powerful position. The parties also won most of the provincial assemblies, which will elect members of the Senate. Tshisekedi would have to cohabitate and negotiate with an opposition-dominated cabinet and legislature to enact crucial legislative and policy, since his Union for Democracy and Social Progress and its affiliate parties only won 50 out of 500 seats in the National Assembly.

In particular, constitutional reforms require approval by a 3/5 majority in a joint sitting of the two legislative houses, or an absolute majority in each house and approval in a referendum called by the president. Notably, the past two decades have seen the enactment of self-serving constitutional amendments, the centralisation of power to the disadvantage of provinces and territorial entities, and measures undermining the independence of the judiciary and autonomy of the electoral commission, among other institutions that support and promote democracy. The latter institutions have become instruments of tyranny and anarchy.

In January 2011, amendments to some provisions of the 2006 DRC Constitution, adopted without consultation, compromise or popular referendum, entered into force. One of the major changes was the replacement of the majority runoff with a plurality system for presidential elections. The shift followed ostensibly criticism that the run off system is resource consuming and second rounds enhance political tension and insecurity. Nevertheless, these excuses merely justified an attempt to enable the then incumbent President Joseph Kabila to win elections in view of dwindling popular support and the possibility of an opposition coalition in a second round prior to the 2011 presidential elections. The change meant that a candidate can win elections without the support of a majority of voters. Indeed, Kabila won with just under 49 per cent of the votes in 2011, and this amid allegations of rigging. Notably, Tshisekedi received 38.6 per cent of the votes in the latest elections. The low level of support for presidents undermines the legitimacy of the office and potentially their effectiveness. The quest for political legitimacy has justified convenient extra-constitutional arrangements in the name of national cohesion and unity, by wooing, through material gains and corruption, opposition candidates to join the ruling coalition. There is already suspicion that Tshisekedi struck a deal with Kabila to secure his win at the expense of the official runner-up, Martin Fayulu. This practice sets a bad precedence and weakens the parliamentary and extra-parliamentary opposition, which are the cornerstone of democracy.

The 2011 reforms introduced the plurality system for presidential elections, weakened provincial governments and undermined the independence of the prosecution.

The 2011 constitutional amendments also empowered at the vertical level the president vis-a-vis provincial governments, and weakened at the horizontal level the prosecution service vis-à-vis the executive. Although the 2006 Constitution did not establish a federal state, it constituted a constitutional regionalised state wherein provinces enjoyed political, legislative and financial autonomy to boost self-governance, democracy and development from below. The constitution also prohibited constitutional amendments that would reduce ‘the prerogatives of the provinces’. Despite these guarantees, the 2011 amendment empowered the President to dissolve a provincial assembly or to dismiss a provincial governor ‘[w]hen a grave and persistent political crisis threatens to interrupt the regular functioning of the provincial institutions’, through an ‘ordinance deliberated in the Council of Ministers and after agreement with the Bureaus of the National Assembly and of the Senate’. The selection of a new governor must be conducted within 30 days. Even though a situation of ‘grave and persistent political crisis’ is yet to be defined, or occur in practice, the amendment violates the spirit of the constitution. Its vague and abstract formulation also provides the national executive room for manipulation of provincial entities. The Supreme Court of Justice acting as the interim Constitutional Court, before the establishment of the latter, was offered the opportunity to clarify these requirements in 2011, but it never responded to the constitutional review applications, without providing any reasons. Accordingly, the new government should work towards reversing the 2011 amendments and strengthen the position of the provinces. Considering that pro-Kabila parties dominate provincial assemblies, they may have interest in supporting such reforms.

An electoral body composed of political appointees cannot be expected to act with independence and impartiality.

The 2011 amendments to constitutional provisions on judicial independence have been invoked to justify the adoption of laws that undermine the independence of the prosecution. Under a law adopted on 11 April 2013, the minister of justice can enjoin prosecutors to trigger prosecutions and not to suspend them, even if the law formally forbids the minister from interfering in the conduct of prosecutions. The prosecution services have been portrayed as repressive tools of the executive, including against prominent opposition figures. Accordingly, constitutional and legislative reforms enhancing the status and independence of the prosecution service would ensure that the office enjoys greater independence and legitimacy.

The 2003 Transitional Constitution, along with the 2002 Pretoria-signed Accord Global et Inclusif, provided for five independent institutions. In contrast, the 2006 Constitution entrenched only two institutions in support of democracy, namely the Independent National Electoral Commission (CENI) and the Superior Council of Audio-visual Media and Communication (CSAC). Notably, the Constitution does not establish a human rights commission. While a National Human Rights Commission was established in March 2013, it lacks constitutional entrenchment and has largely been ineffective due to lack of independence, capacity and resources. The constitutional entrenchment of the Commission would contribute to enhancing its status and effectiveness.

Moreover, while the constitution recognises the electoral commission, it leaves crucial details of independence and composition to legislation, which has led to its politicisation. Under the law regulating the commission, it is composed of ten representatives of political parties and three civil society delegates. An electoral body composed of political appointees cannot be expected to act with independence and impartiality, especially as the ruling party often appoints a larger proportion of the nominees. The African Court on Human and Peoples’ Rights has expressed concern that the presence of party representatives in electoral commissions undermines the impartiality of such commissions. Tshisekedi has acknowledged the necessity of reforming the country’s electoral machinery during his 24 January 2019 inaugural address to the nation. Such reforms should include entrenching crucial aspects of the electoral commission in the constitution.

Constitutional amendment processes should involve consultation with the public and provinces and be subject to review by the Constitutional Court.

In addition, political upheavals, armed conflicts, human rights violations, acts of corruption and embezzlement may necessitate the establishment of a Truth and Reconciliation Commission (TRC). The 2003 Transitional Constitution established a TRC, but this was removed in the 2006 Constitution. The regime change has already provided room for debate on a TRC to reoccur in the public space. The campaign document of Tshisekedi and his party included a list of fundamental values, including ‘truth, justice and peace’, which could be enshrined in the constitution. The document also anticipates the establishment of a ‘National Observatory for Ethics and Democracy’ to foster ‘good governance and national unity’. This initiative could potentially include the implementation of processes towards reconciliation.

Towards a consultative process and control of constitutional amendments

While critical, the proposed reforms may not be effective if the people and provincial entities are not consulted before their enactment. A consultative process would break from a culture of rushed and top-down impositions and signal a new era of transparency, participation and compromise. Moreover, to tame the spectre of regressive amendments, an independent Constitutional Court should control their adoption.

Consultation prior to voting in a referendum would enhance popular knowledge and genuine participation.

Even though the public could participate in constitutional referendums anticipated in the constitution, consultation prior to voting would enhance popular knowledge and genuine participation. The constitutions of Ghana and South Africa, for example, provide for mechanisms of transparency and participation including through publication of amendment bills. The process through which the 2011 amendments were adopted indicate the limits of confining the amendment process to the four walls of parliament. Most people regarded some of the amendments as acts of betrayal of voters.

Reforms may also be considered with a view to empower the Constitutional Court to review the substance of proposed constitutional amendments to ensure compliance with prescribed fundamental provisions. Despite concerns, the judicial review of amendments could help preserve the stability of constitutional norms, safeguard the equilibrium among various powers, and prevent the infringement of fundamental rights and freedoms. Nevertheless, such an expanded role for the Court would require an enhancement of its legitimacy and independence, which are currently lacking.

President Felix Tshisekedi’s campaign message was centred towards reinvigorating the state through upholding human rights, democratic values, rule of law, constitutionalism, the empowerment of national and provincial entities, ending poverty and strengthening the judiciary. These all relate to the issues captured in the reform agenda outlined in this piece. Nevertheless, while Tshisekedi may propose constitutional reforms, his party controls very few seats in parliament. Accordingly, he would need to secure the buy-in from other parties, notably the coalition of pro-Kabila parties. Public support for the proposed reforms and the potential incentives for pro-Kabila parties could make the reforms a reality. Civil society organisations and intergovernmental institutions, particularly the African Union and the Southern Africa Development Community, should encourage and support newly elected officials to push these and other needed reforms through.

Trésor M. Makunya is a Congolese lawyer and Doctoral Candidate and Academic Associate at the Centre for Human Rights, Faculty of Law, University of Pretoria, South Africa.